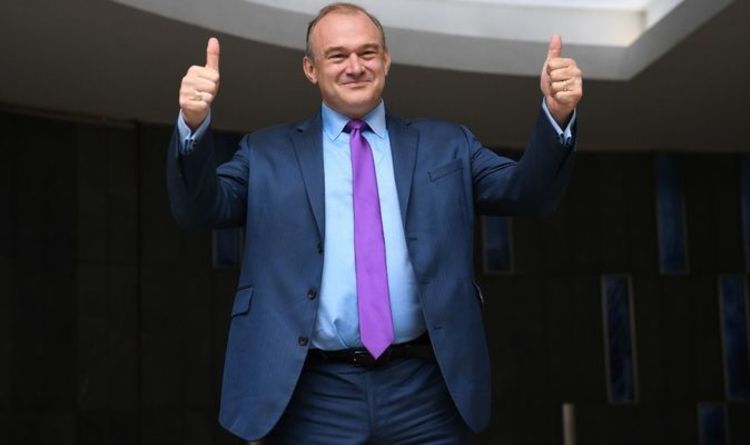 Sir Ed Davey, 55, is hoping to push on from the Liberal Democrats success in the Chesham & Amersham by-election with yet another victory in the so-called Blue Wall. Party officials are particularly hoping to challenge the Conservative Party in the upcoming contest in North Shropshire on December 16.

The rural constituency has been forced to hold a by-election after the ex-Northern Ireland Secretary Owen Paterson, 65, resigned following an investigation which found he broke lobbying rules while receiving £110,000-a-year in private sector work.

Most bookies have Davey’s party as second-favourites in the race.

But they now hope to overhaul the Tories’ 22,949-vote majority in the Brexit-backing seat.

The Liberal Democrats took yet another step in their Blue Wall onslaught last night by taking control of Wokingham Town Council.

The victory follows on from the party making impressive gains in Oxfordshire and Cambridgeshire in May’s local elections.

Wokingham, which has been represented by the Conservatives in the Commons since the seat was created in 1950, also witnessed a shift towards the Liberal Democrats in the 2019 General Election.

Speaking about the Liberal Democrats’ town council victory, a party source said: “This is exactly how the Chesham & Amersham by-election started, with the gain of Amersham Town Council setting the wheels in motion.”

Boris Johnson, 57, faced his first significant electoral hit as Prime Minister at the hands of the Liberal Democrats following defeat in Buckinghamshire back in June.

The Conservative Party has since seen its support dip in the opinion polls, with some indicating Deputy Prime Minister Dominic Raab, 47, could lose his Surrey seat of Esher & Walton.

Disaffection with Mr Johnson has also reportedly increased within the Conservatives’ Commons contingent, with up to a dozen MPs handing in letters of no confidence to the backbench 1922 Committee.

In a warning to Prime Minister, the Liberal Democrat source said: “Boris Johnson faces a toxic cocktail of sleaze and incompetency which runs right through his Government and Tory run councils.”

Looking ahead to the upcoming contest to replace Mr Paterson, the source added: “All eyes will be on North Shropshire now.

“This is yet another part of the country the Tories have taken for granted for too long.

“We moved forward there locally in May and were the main challengers to the Conservatives which follows the trends we’ve been seeing in southern Blue Wall seats.”

Before voters in North Shropshire go to the polls, constituents in the Tory seat of Old Bexley & Sidcup will decide who will replace James Brokenshire on December 2 after the ex-Housing Secretary passed away with cancer aged just 53.