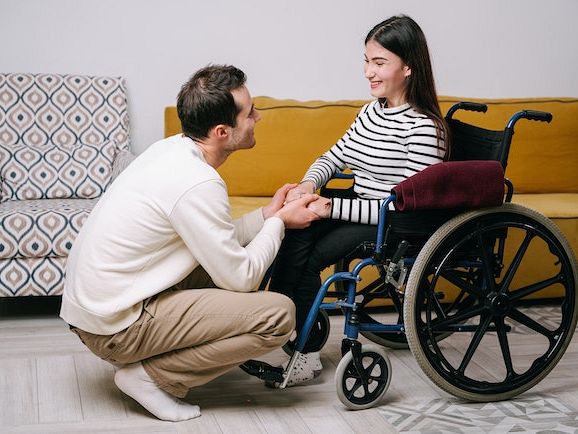 Graeme Sparkes reviews a memoir that explores the bond a mother shares with her son who is living with disability and her resolve to ensure his right to sexual life.

IS THE MATERNAL bond a form of bondage? It’s a question that haunts Thea Calzoni‘s new memoir Dancing with the Maternal Bond: Life with an unusual child.

Before she had children, Calzoni met a mother campaigning for universal childcare who told her that the maternal bond for most mothers was isolating and alienating, and trapped women in their houses.

At the time, the young writer’s feminism was focused more on sexual freedom and gender equality than on motherhood; it wasn’t until she had her first child that she fully confronted the maternal bond. Julian was born with an array of problems.

In a poignant, sometimes amusing, often confronting but always tender account of raising Julian, Dancing with the Maternal Bond retraces the boy’s progress from birth to adulthood, which seems more harrowing for Calzoni than her child, who perhaps is wondering what all the fuss is about. One such moment comes when the author is confronted with, even affronted by, the suggestion that Julian “has a disability”.

Calzoni finds hope in the phrase “delayed development” with its feeble promise — until it is debunked when she and partner Ron are given the results of an expert’s psychological assessment advising their child would benefit from attending a “special school”.

The love Calzoni has for her son is not quite unbounded, for there are regrets about the abandonment of her youthful dreams, but it is without a doubt searing and steadfast. Although she feels the enormous weight of societal expectation – particularly once Julian begins to enter social milieux, such as childcare and school – Calzoni never loses sight of his right to access all the opportunities and privileges available to other children.

This is a book that should interest all parents, not just those whose children are disabled. It deals honestly with inevitable socialising issues: Why can’t a child just pee or poo where it likes? Why does a child have to learn to share its toys? Why can’t a child wear pyjamas to school?

There’s a myriad of things to learn in order to be accepted in society. For children living with disability, there’s even more pressure to master as many of these norms as possible, lest their conduct sets them up for ridicule.

There are moments of humour in this book: ‘My biological clock kept ticking in time to the band.’ (The author’s husband Ron is a musician.)

‘Furious, I could have killed him, but I held him to me.’

There are moments of insight:

‘Having a baby is a threat to your identity.’

And moments of guilt, when a difficult, protracted natural birth – after refusing to have a caesarean – may have contributed to Julian’s disability.

Perhaps the most controversial and interesting chapters are those which deal with Julian’s emerging sexuality and the lengths to which Calzoni goes to ensure her son has a satisfying sexual life. If for no other reason, parents and non-parents alike should read Dancing with the Maternal Bond for this powerful advocacy for every human’s right to a dignified life.

Her commitment has led Calzoni to organise self-help groups, lobby for government funding and run community-writing workshops (with some excerpts of the moving writing produced which appear in this book), all to overcome the isolation faced by parents of children like Julian.

Before I began to read this memoir, the title jumped out at me. The film, Dances With Wolves, came to mind, which is a story about a soldier in the U.S. cavalry at the furthest reaches of a brutal frontier. He lives in relative isolation but befriends and protects an orphaned wolf cub.

Whether the reference was intentional or not, by the end of Dancing with the Maternal Bond, I had the feeling that motherhood, while enduring daunting moments, also has many moments of wonder.

Graeme Sparkes has taught in high schools and TAFE. He is the author of several books.

‘Dancing with the Maternal Bond: Life with an unusual child’ is available from Bad Apple Press for $25.19 (paperback).