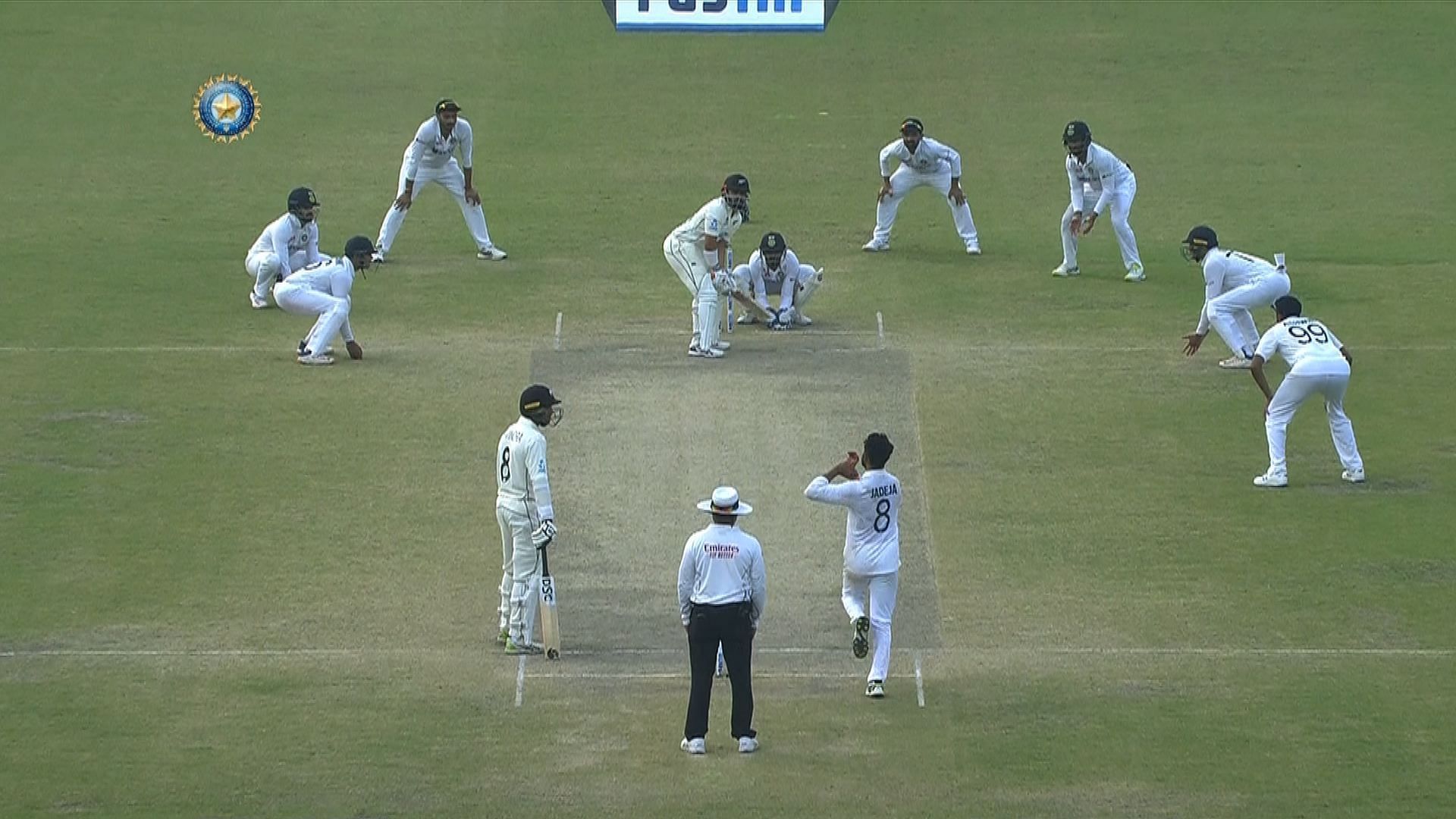 India head coach Rahul Dravid opined that there were just two ways to get batters out on the flaccid Kanpur pitch for the first Test versus New Zealand. However, he lauded his bowlers for taking the game to the wire in what could have been a drab contest.

Negating fading light, three quality Indian spinners and a subcontinent track, New Zealand eked out a well-fought draw to save the match with just a wicket left. Having played at the Green Park stadium himself, Rahul Dravid was bemused as to why there wasn’t any turn and bounce on offer even on Day 5.

“It probably was low and slow, probably didn’t have that much bounce, didn’t have turn. Yeah, you probably expect a little bit more wear and tear on these wickets in Indian conditions, over the course of five days. This didn’t seem to have that kind of bite,” Dravid said at the post-match press conference.

The spin trio of Ravindra Jadeja, Ravichandran Ashwin and Axar Patel operated with the old ball, then took the new cherry in the 85th over and had fielders swarming around the batters, but to no avail. Rahul Dravid mentioned that the lack of carry and turn meant that the bowlers could only try getting batters either bowled or LBW.

“Generally in India, on Days 5, you can challenge both edges – at least spinners can certainly challenge both the outside edge for the catches and beat people on the inside edge and get the LBWs. But honestly, in this game, the outside edge was virtually ruled out. Even till the last day, none of the edges carried, I can’t remember a catch close to the bat – I think Bharat took a couple – but other than that, nothing else.

“It sort of felt just like there were only two ways to get people out – bowled and LBW – which was probably true in the last session. So I think we did a great job, inspite of that to be able to prize out 9 wickets on the last day. But yeah it was tough, we expected it to be tough in Kanpur. I have played here before, I know wickets here can be tough. But yeah, this was probably lower and slower than anything I have ever experienced here,” the legendary batsman elaborated.

No. 11 Ajaz Patel (2* off 23) and debutant Rachin Ravindra (18* off 91) played out 52 deliveries in a gritty rearguard action, before bad light eventually forced the end of play.

“With a little bit of luck, it could have gone our way as well” – Rahul Dravid

As Ravindra Jadeja (4 for 40) caught Tim Southee plumb in front, New Zealand were reduced to 155 for 9. It would have been an easy India win on another day, but here, with the sun hiding behind the clouds, the match was on a knife’s edge.

The floodlights at the Green Park Stadium were switched on around 3 p.m. and the umpires – Nitin Menon and Virender Sharma – started pulling out the light meter at the end of every over post 4 p.m. When so many external factors come into play, coupled with the wagging Kiwi tail, how difficult was it for India’s bowlers to maintain calm and execute their plans?

“It was expected, we kind of knew the light was going to dip at that point of time. It has been happening sort of everyday. Not very difficult, I thought the guys were pretty switched on. I thought we showed great composure, great fighting spirit, to be able to sort of, worked really hard in that last session on what is really quite an unresponsive pitch, even on the fifth day.

“So I think the guys were very good, it was a really good effort considering to be able to take 8 wickets after lunch – 3 in that session and 5 in the last one – and really run the game close. With a little bit of luck, it could have gone our way as well,” Rahul Dravid said in response to a Sportskeeda query.

Both India and New Zealand have now earned four WTC (World Test Championship) points. The carnival will now move to the Wankhede Stadium in Mumbai for the final match of the tour starting Friday (December 3).

Q. Can India win the Mumbai Test to seal the series?