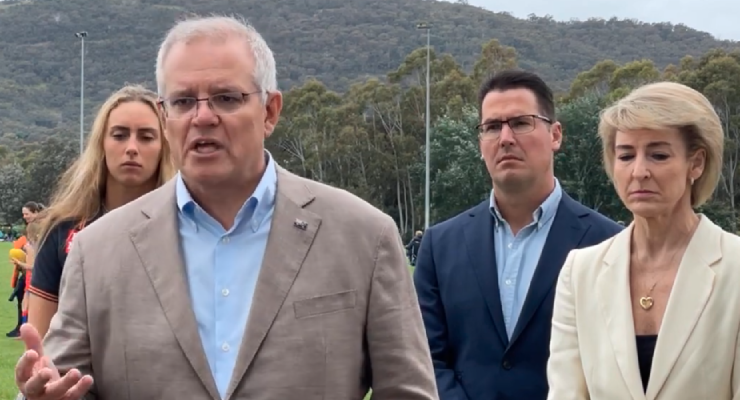 Days after a senior minister successfully sued an unemployed activist for a six-word tweet, Scott Morrison and Michaelia Cash proudly fronted up to talk about a scheme that promises to make it easier to pursue online anonymous accounts for defamation.

In a Sunday morning press conference, the prime minister positioned the as-yet-unseen bill as part of the government’s crackdown on big tech and online trolls.

“Social media can too often be a cowards’ palace where the anonymous can bully, harass and ruin lives without consequence,” he said.

On top of reversing the recent court decision to deem social media platforms the “publisher” of online comments — a significant reform in itself — the proposed bill comes with two reforms that will assist in defamation proceedings, the government claims.

The first is requiring social media companies to have a process for requesting the identity of an individual behind an account. This entails mandating that platforms must have a business presence in Australia and that they make a “quick, simple and standardised complaints system” that allows users to request to have comments removed and to reveal the identity of accounts, assuming that the individual behind the account consents.

If social media companies do not have this contact information, they will be deemed the publisher of and held liable defamatory comments. This will introduce a de facto social media identification policy — making these companies a honey pot of personal data that could be leaked or stolen.

The second reform is for what happens when the user behind an anonymous account doesn’t consent to having their details shared. The bill introduces an “end user disclosure order” which will allow the Federal Court to demand the contact details for the anonymous user who declined to provide their details.

The government hasn’t released any information about obtaining this order, so there’s nothing known what level of proof will need to be met to unmask a user or whether there will be any protections for groups like whistleblowers. The detail of this will be crucial to understanding the full impact of the bill.

Putting aside serious concerns about the need for anonymity and providing social media companies with huge amounts of personal identifying information, the question is: will this proposed law improve the online experience for the average Australian?

Will this help with online trolling?

Certainly, being harsh on big tech is popular. Polling shows Australians are not too fond of social media companies and further research today shows that nearly two-thirds of Australians want to ban anonymous accounts. From that perspective, it ticks an electoral box for a government to campaign on keeping families, in particular children, safe online. The framing positions online harms as online abuse and not, say, the misinformation that’s rife online — including the lies and conspiracy theories spewed by MPs sharing a party room with Morrison.

Despite the government’s claims, this law doesn’t directly solve the problem of “online trolls”. While some people hoping to abuse and harass others online may defame them, a significant portion of online trolling is not trolling — i.e. telling someone to “kill yourself” makes no defamatory claim — and wouldn’t be solved by this proposed legislation. Many of them use their real name too. (The government has passed a suite of other online reforms including the Online Safety Act which is more specifically about online abuse).

Even looking at the smaller subsection of defamatory online trolling, it’s not clear that it makes a substantial difference.

As it stands, Australian courts currently have a process for unmasking online accounts. Australians can apply for preliminary discovery in court, requesting that social media companies provide details to a claimant.

University of Sydney law professor David Rolph points out that these existing orders have been used frequently against companies like Google to reveal the identity of people leaving defamatory reviews of their services and the like.

He says these orders can be complicated or even foiled by legal jurisdictional issues like having to serve a US-based company to get a user’s details.

Presumably a new, specific process along with a de facto requirement for maintaining a database of user’s contact details would streamline finding out someone’s identity to pursue them in the courts — an efficiency that would theoretically reduce costs.

But any gained efficiency would be dwarfed by the overall costs of going through the arduous and expensive process that is Australia’s court systems.

While Australia’s media often talks about Australia’s strict and expensive defamation laws for publishers, the flipside is that anyone hoping to pursue a defamation claim must also have means beyond what most people have available: specifically large amounts of money and time to burn.

This law does practically nothing to improve access to justice. Realistically speaking, most average Australians would not be able to afford to sue someone for defamation, and any potential costs awarded would be dwarfed by legal fees they paid.

“Most people don’t want to sue for defamation and the anxiety that’s involved, they want material taken down promptly,” Rolph said.

The current system is imbalanced in a way that benefits the wealthy and powerful: a high-profile media commentator can use their platform to speak on issues, knowing they have significant legal resources. They can pursue or threaten to pursue someone if they believe they’ve been defamed, like in the case of Peter van Onselen, Andrew Laming and Shane Bazzi.

Meanwhile, those without the same means or institutional backing are not on the same footing: they may fold to a threat of defamation or fail to pursue one because they simply cannot afford it.

That’s why Morrison has rolled out Erin Molan and an AFLW player to speak on these reforms. Certainly, no one deserves to be trolled and public figures cop an incredible online abuse that is beyond the pale. But these reforms are more likely to help them than they are your average Australian.

When announcing these “anti-trolling” reforms, Morrison and his government have talked a big game. But when it comes down to it, these laws are more likely to help the powerful get revenge than help your average Australian stop online abuse.

Get our sold out book FREE and 20% off Crikey

The first book in The Crikey Read series, Lies and Falsehoods by Bernard Keane, has sold out.

If you would like your chance to read Keane’s scathing take on why deceivers dominate in the new era of politics, join Crikey today and receive the book for FREE, plus 20% off your annual subscription.

But this offer ends midnight Tuesday, so move fast before these are gone too.