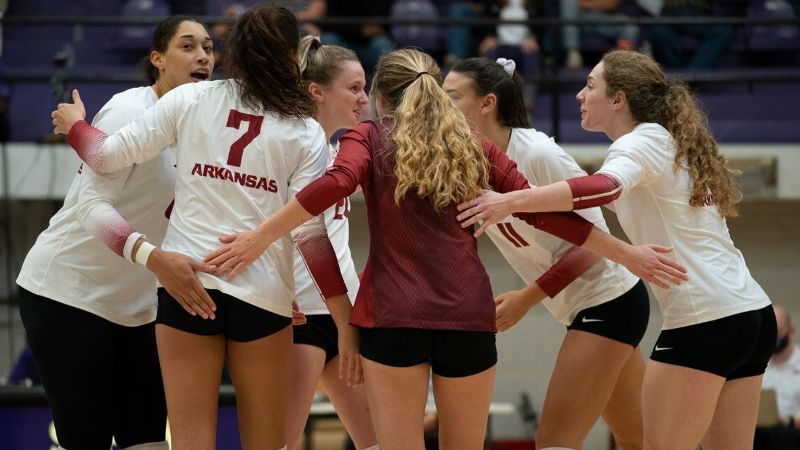 In their first postseason match in eight years, the Razorbacks made quick work of the opportunity with a 3-0 sweep Saturday over Stephen F. Austin in the second round of the National Invitational Volleyball Championship.

The Razorback offense shined all night as the team hit .347 to SFA’s .072. It was the Hogs’ best hitting clip as a team since their Sept. 4 match against Portland, and four Razorbacks hit over .300.

The first set was tight between the two teams and Stephen F. Austin consistently held a lead through the 10th point. The Hogs then took advantage of three Ladyjacks attack errors and added a kill from Cartwright for a lead that they’d ride for the remainder of the set. A kill from Crumpton and ace from Head sent SFA to a timeout down 16-21, and while the Ladyjacks tacked on two more, a Gillen kill and ace from Gracie Ryan closed the first set 25-18 for the Hogs.

A four-point Arkansas run gave the Hogs a 9-3 lead early in the second set. Stephen F. Austin used a timeout to regroup, but the Razorbacks didn’t slow down and grew their lead to as many as eight points midway through. SFA strung together three straight to cut the Arkansas edge to four, but the Hogs added kills from Gillen, Cartwright and Abigail Archibong to hit 20 first and went up by five. Two kills from Crumpton and a Cartwright ace made it 23-16, and after a Ladyjacks timeout the Hogs scored two of the next three for a 25-17 second set victory.

The Razorbacks opened the third set with the first two points and they never looked back from there. While the Ladyjacks kept it close to start, Arkansas pulled away with a 4-2 run for an 11-6 lead. The Hogs were the first to 15 off a kill from Cartwright and then the first to 20 with a kill from Ryan and led 20-14.The Ladyjacks added four points to the Hogs’ three to narrow the gap, but a Gillen kill took the visitors to set and match point,. An error from SFA put Arkansas to 25 and sealed the third 25-18 and the match 3-0. The Hogs saved their best for last and hit a match-best .485 in the third set to the Jacks’ .034.

The Hogs now travel to El Paso, Texas for the third round of the NIVC. They will face off against UNLV at 6 p.m. CT on Tuesday, Dec. 7, while host UTEP and Weber State will play the second match at 8:30, all looking for a spot in the NIVC semifinals. Streaming information will be announced as soon as it is available.

Visit ArkansasRazorbacks.com for the latest information on all things Arkansas Volleyball. You can also find the Hogs on social media by liking us on Facebook (Arkansas Razorback Volleyball) and following us on Twitter and Instagram (@RazorbackVB).