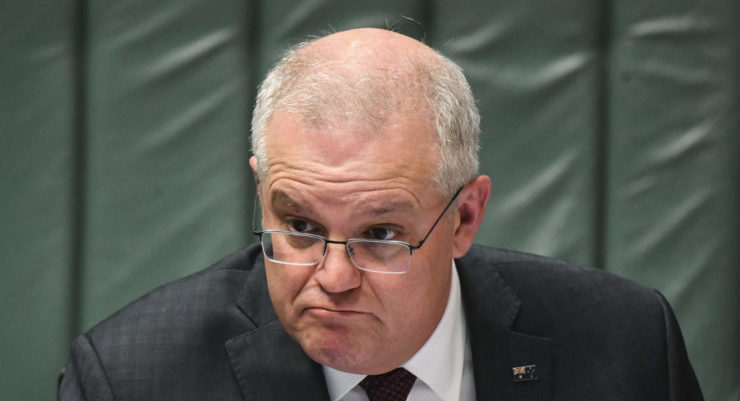 It’s election season, folks. In what AFR described as a “full dress rehearsal” for next year’s campaign, Labor Leader Anthony Albanese confirmed a rather vanilla new slogan at the weekend — “A Better Future”. And it’s going to get personal, it seems. His deputy Richard Marles called Prime Minister Scott Morrison a liar no fewer than 18 times at a campaign rally in Sydney, saying Morrison “even lies about lying”. Indeed Morrison did say last month that he’s never lied in public life, as Guardian Australia plainly debunked.

The main course during the election campaign will be our economic recovery, but Labor’s new climate policy (a 43% cut in emissions from 2005 levels, as SMH delved into) is sure to play on voters’ minds, one way or another. Treasurer Josh Frydenberg warned on ABC’s Insiders yesterday that Labor’s target would rely on winning the Greens over “and the Greens have a 75% emissions reduction target”. But Marles assured viewers on Sky News that there would be no Greens-Labor coalition, as Yahoo reports.

So what else is on Labor’s menu? The SMH reports Labor’s offering a billion dollars to make half a million TAFE spots free, plus another 20,000 free university spots. Significantly, Albo has also promised to adopt the Uluru Statement from the Heart, which calls for an Indigenous voice to Parliament. Also in the plan are aspirations to make Australia a renewable powerhouse, as well as cheaper childcare and stronger Medicare. And it’s going over well with voters so far, it seems — The Australian’s ($) Newspoll shows Labor is the favourite to win with 53-47% skew on a two-party preferred basis.

At the same time, Morrison implored voters to focus on the “windscreen” ahead rather than the “rear vision mirror” — his pun came as he did a televised lap around Mt Panorama in Bathhurst, as 7Sport filmed, in a car driven by former champion Mark Skaife. Ne’er a missed opportunity.

The blows keep coming in Australian politics, and sometimes that means literally. Political activist Paddy Gibson was threatened at the weekend by three men who tried to force their way into his home, Guardian Australia reports. Gibson tweeted that the “skin heads” demanded him by name, and were all wearing Eureka flag shirts. The flag is traditionally a motif of rebellion — but it seems it’s been co-opted after being spotted at the violent anti-pandemic laws rallies in Victoria last month, as ABC reports.

Meanwhile, Nationals senator Sam McMahon allegedly took four swings at the Nationals’ federal director at their Christmas drinks, Sky News reports. McMahon apologised to her boss Barnaby Joyce over the incident which reportedly took place outside a Canberra pub, his office confirmed. If McMahon’s name is ringing a bell, it might be because the Northern Territorian was one of five Coalition senators who crossed the floor to vote for a One Nation bill banning vaccine mandates, as The Canberra Times reported.

But things could be about to get safer in the hallowed halls of Parliament. Treasurer Josh Frydenberg said on ABC’s Insiders yesterday the government would be taking action on “all of the recommendations” in sex discrimination commissioner Kate Jenkins’ damning report into the toxic work culture of Canberra.

Queenslanders will learn whether Premier Annastacia Palaszczuk will bring forward big changes to restrictions in the sunshine state, The Brisbane Times reports. Queensland is now 78.17% vaccinated (that’s the over 16 population), and Palaszczuk promised that borders would reopen to the vaccinated when they hit 80% coverage or by December 17, whichever came first. Mid-December will also see unvaccinated folks banned from cafes, pubs and hospitals, The West ($) reports.

Further south and two cases have been linked to the infection of SA’s former premier Jay Weatherill, ABC reports. It comes as SA announced on Saturday all travellers from NSW, Victoria, and the ACT would have to be tested for COVID-19 and isolate until they got their results. Queensland’s gone one step further, mandating 14 days of quarantine for all Adelaide visitors.

In the west of the country, Premier Mark McGowan is reportedly about to announce the cloistered state’s reopening date, The West ($) reports. It’ll probably be in January or February, Guardian Australia adds. McGowan actually made international news over the weekend when The Washington Post reported his comments that he “wouldn’t be unhappy if bad outcomes occurred” to white supremacists in the US who are feeding wrong information to Indigenous Australians.

Finland’s PM Sanna Marin has done a rare interview and within it possibly revealed the secrets of happiness. This year Finland was voted the world’s happiest nation by the UN Sustainable Development Solutions Network after researchers asked people from all over the world to rate their contentment level out of 10. So what is the secret? Marin says it really comes down to three things: equality, a well-funded education system, and a strong welfare state.

And Marin’s putting her laws where her mouth is — Finnish fathers will soon get double the amount of paternity leave, from 54 days to 97 days, under sweeping changes to parental leave. It’s designed to help mothers get back into the workforce and help close the gender pay gap. The country has also made education compulsory until the age of 18 — it means kids have to do either traditional schooling or vocational training (like TAFE) until adulthood. Marin, who is from a low-income background herself, has also vowed big bucks to solve homelessness by 2027. How? Marin says it means making big changes to the healthcare, social security and employment systems, too. “We have to make sure that we’re treating people as whole individuals”, she says.

The South Sudanese community was not involved in the end-of-Ramadan cluster … Many members of the community were born in Australia, were educated here and read, write and speak English perfectly well.

The longtime former political staffer and Sky News host has apologised 18 months after she accused the South Sudanese population in Melbourne of causing a COVID outbreak. In apologising, Credlin acknowledged that most of the community are, in fact, Christian not Muslim. Sky News Australia was a little quicker off the mark, issuing a statement of apology immediately after her accusation was broadcast last June.

Labor won the final parliamentary weeks. Does that even matter?

“The point is, most of the voters in the marginal seats that will decide the election pay little attention to what goes on in Parliament. So while the government might have ‘lost’ the final sitting fortnight, Labor now faces the challenge of turning Morrison’s deceitfulness into an election-winning narrative that plays well in the living rooms of middle Australia rather than the bearpit of question time.

“Labor’s strategy: cut out lines of attack for the government, focus on divisions within the government and Morrison’s character while leaving the policy powder dry until the last is working insofar as they head to summer in a strong position.”

Christian Kerr: the living — and now departed — reason why anonymity has power in politics

“The depth and breadth of Christian’s Crikey sources is still only starting to become apparent. Former Liberal Party staffer turned refugee advocate and barrister Greg Barns is another prepared to ’fess up as part of his tribute to a man who helped turn coverage of Canberra on its head, commencing with the launch edition of Crikey on February 14, 2000, some four years into the Howard era.

“‘Yes, I was a proud Hillary assistant,’ Barns said last night, reflecting on the man he first met when both were small-l Liberal staffers in Parliament House during the first three years of the Howard government. Barns worked for John Fahey and Christian served Robert Hill and Amanda Vanstone.”

A rotten end to a rotten year for a rotten government

“But for Scott Morrison, the end of 2021 was particularly ragged — worse even than the chaotic end of 2018, when his government was in minority …

“Religious discrimination bit the dust after barely an hour of debate, shuffled off into a committee. Even the Christian fundamentalists are abandoning the bill. Class action curbs hit the fence, despite Zali Steggall backing them in the House. Voter ID was dumped altogether, a racist bill condemned to the garbage can it belongs in.”

Potential foes won’t wait for Australia’s nuclear submarines —Tony Abbott (The Australian) ($): “… if Russia could sell second-hand nuclear subs to India, it should be more than possible for Britain and America to make them available to their closest and most intimate ally … And, yes, submariners are a rare breed, and nuclear engineers can’t be found overnight. But the prospect of pioneering an Australian nuclear navy could be just the incentive some need to stay in service — and to follow the many Royal Navy personnel who’ve transferred down under over the decades.

“Yet few traditions are harder to shift than those of our armed forces — including the tendency to want the latest and the greatest, specially modified to fit our supposedly unique conditions, and only after repeated studies, hence decisions are about the next decade rather than the next year. The trouble with being ready in 20 years’ time is that our potential foes may not wait. If shooting starts, planned weaponry, however extensive, means next to nothing. And if there is to be conflict, we’re five years closer to it now than we were at the time of the now-aborted French partnership, and as yet no closer to having better submarines.”

I write ‘women’s commercial fiction’ — why is my work still seen as inferior to men’s? — Emma Hughes (The Guardian): “The whole question of genre is something that female writers of all stripes have to contend with far more than their male counterparts. Just look at people’s obsession with categorising Sally Rooney. The idea that a young woman’s pastel-covered novels about millennials falling in love might qualify as literary fiction causes a fair few commentators to start frothing at the mouth: in 2019, Will Self dismissed her work as ‘very simple stuff with no literary ambition’ during an interview to promote (and I swear I’m not making this up) a line of macarons for the restaurant Hakkasan.

“… Of course, there’s nothing wrong with labels: they’re invaluable in conceptualising a novel’s ‘package’. But they can also be limiting, and there’s no getting around the fact that their application is heavily gendered. We don’t call novels with titles like Bravo Agent Mincemeat and The Leonardo Enigma ‘men’s commercial fiction’ — we just call them ‘books’.”