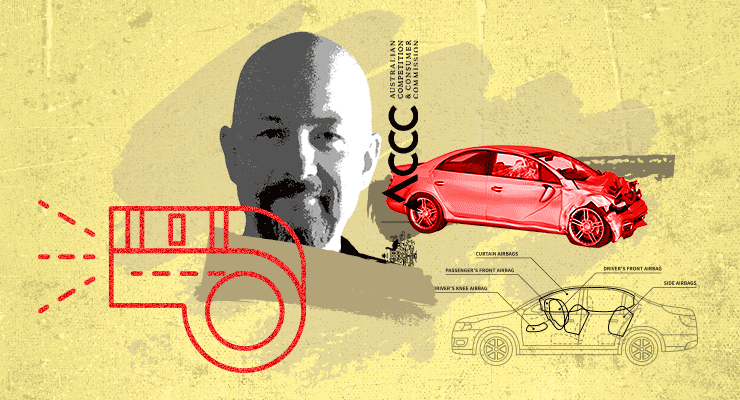 What happens if you blow the whistle and lose your job — but are then vindicated by an independent inquiry?

Three years ago an anonymous Australian Competition and Consumer Commission (ACCC) official was frogmarched out of his office — and later threatened with criminal action — after internal emails became public via a television exposé on the Takata airbag scandal.

The official was concerned the ACCC had not reacted quickly enough on the threat to public safety of the potentially deadly airbags and used its powers only after a driver was killed by shrapnel from an exploding airbag which penetrated his neck, causing him to bleed to death.

Now a coroner’s hearing has confirmed that many of the official’s warnings were on the mark.

For one thing it means the official feels confident about revealing his identity. His name is Dean Wright. He held a senior executive level position as assistant director of the ACCC’s product safety branch and he was 52 at the time.

“I am entirely comfortable with what I did,” Wright told Crikey. “I felt I had no choice.

“I don’t regret my part in revealing the truth about the years of dithering. I’d like to believe that the coronial court’s recommendations will save lives and prevent further horrific injuries.”

Does he feel he is owed an apology?

“Yes. That would be the right thing to do, but more to the point the ACCC owes the public an apology for not being truthful.”

Two federal agencies were responsible for the recall of Takata airbags: the ACCC and the Department of Infrastructure and Regional Development (DIRD). Ultimately, neither did the job properly.

The NSW coroner’s inquest which reported last month made the key finding that the ACCC and the department had “inadequately administered and monitored” the Takata airbag voluntary recalls for two years before Sydney man Huy Neng Ngo died in a minor accident in July 2017.

The inquest found there had been at least seven “missed opportunities” to raise the alarm.

Wright had witnessed the lost opportunities and dithering between the two agencies. He pressed, unsuccessfully, for the ACCC to step in and use the powers it uniquely has to compel car manufacturers to recall faulty products rather than allow a voluntary recall, led by the industry, to take its course.

In the meantime he was watching an escalating threat unfold as the number of deaths and injuries due to faulty Takata airbags mounted in the United States, as emails were sent between departments and meetings were held. It was becoming apparent that although the threat of the Takata airbag lay not so much in the sheer number of people it might kill but in the randomness and horrific nature of the deaths and injuries.

The particular problem with the Takata airbag is that as it ages it can explode on the slightest of impacts, sending lumps of metal flying from the steering wheel directly into a driver’s head and neck, with a result similar to a gunshot wound.

In Australia a young Darwin woman was blinded in one eye and has been left with permanent brain injuries after an airbag exploded in the months before the Sydney accident. Another Takata death and one other serious injury have since emerged. The coroner concluded it was “quite possible” there have been other Takata deaths but the real cause of the deaths had gone undetected, the injuries being attributed to “the force of a car accident and other shrapnel, rather than from a defective airbag mechanism”.

Set against this, Wright found the inaction and arse-covering unconscionable.

“Is it worth it to blow the whistle?” he said. “That’s a difficult question to answer.

“I’d caution anyone to think twice before blowing the whistle in any federal government agency. You’re likely to be frogmarched out of the building and threatened with prosecution under the Crimes Act — even imprisonment and enormous fines.

“If you do it, make sure someone on the outside has sufficient documented evidence of the malfeasance. Once you’re facing the might of the government’s legal machinery, solid evidence written in the culprit’s own words is going to be your only salvation.”

Wright is sceptical of the federal government’s internal whistleblower process, the Public Interest Disclosure (PID), which is administered by the Commonwealth ombudsman and is designed to protect whistleblowers from reprisals.

“The PID process isn’t fit for purpose,” he said. “In my case, two other government officers had already filed official complaints about the endless dithering at the ACCC and avoidable life-threatening injuries. Nothing of any consequence was done and the Takata airbags fiasco soon followed.

“Allowing a government agency to investigate its own wrongdoing is plainly ludicrous. Complaining about the investigation to another federal agency is equally pointless.”

Wright has suffered real consequences for acting on his conscience and professional commitment to public safety. In taking on the hierarchy he forfeited his long service leave, which was due within months, and sacrificed at least another 10 years in the government sector “doing a job that I loved and believed in wholeheartedly”.

He was also forced to move cities for work.

So rather than punish a whistleblower who turns out to be right, what is the answer?

“In the US, whistleblowers are encouraged to report wrongdoing by means of a reward scheme. Is that the solution?” Wright said. “But for a start, let’s stop persecuting Australian whistleblowers first and see if that improves the government’s performance.”

The ACCC said it did not propose to comment on Wright’s “actions or opinions”. It also said it had “identified and implemented a number of lessons drawn from the inquest” before the coroner’s report was released and was working on others.

Should whistleblowers in Australia be rewarded rather than punished? Let us know your thoughts by writing to [email protected]. Please include your full name if you would like to be considered for publication in Crikey’s Your Say column. We reserve the right to edit for length and clarity.