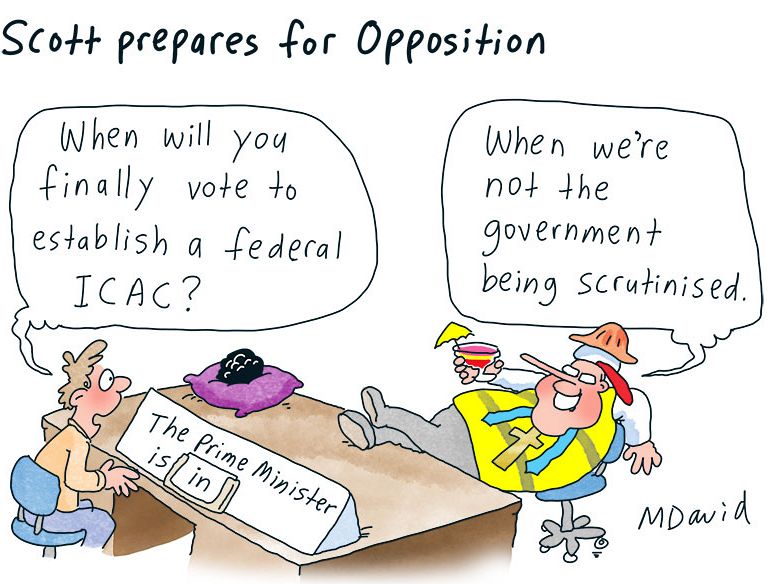 For what non-self-serving legislation or achievements will this Government be remembered? Managing editor Michelle Pini takes a look at the Morrison Government’s record to date.

IT WOULD BE presumptuous to assume that Prime Minister Scott Morrison’s fate is now sealed and his Government rendered to the scrap heap, for, as we know, it ain’t over until the wily media mogul declares it so.

Nonetheless, it is difficult to think of a more tumultuous Federal Parliament in recent history and yet, strangely, it is also tough to produce a government with fewer accomplishments. But Prime Minister Scott Morrison and his band of merry (mainly) men has managed to achieve this questionable twin milestone.

Electoral annihilation is looking more and more likely, however. After all, even wily media moguls can only cover up the stench for so long once a government is really on the nose.

And this Federal Government is undeniably on the nose since it has consistently attempted to set records for:

The 2021 Parliamentary year ended largely as it had begun, with the Morrison Government struggling to get its biggest bills passed and with Parliament set to sit for the least number of days possible in the lead-up to the mandatory May 2022 Election — just ten days in total until August.

Obfuscation and avoidance appear to be the only tools left in the floundering PM’s arsenal. With the indignities mounting up and even the establishment media having the odd go, avoiding scrutiny in the hope that things will blow over and all will be forgotten after a nice bit of plum pudding and a rest from those most sexually harassed of parliamentary annals, is all that remains. That, and some more prayer, of course.

LEAST NUMBER OF DAYS IN PARLIAMENT

Until the Morrison Government set a new trend for indolence, the House has sat (with few exceptions), on average, 67 days each year since 1901.

But this PM has overseen a part-time parliament, attempting to set a new record for the shortest parliamentary sitting time in 2019, with a total of 45 days — just ten of these occurring before the election was held on 18 May that year.

In 2020, Scotty clearly exhausted himself with 58 sitting days in total! This must have caused him to ensure he wouldn’t overdo it again in 2021, since the total number of sitting days promptly plunged back down to 49.

And planning ahead for next year, it’s back to giving his prior exemplary record another nudge, with just ten sitting days planned before August if an election is called in May, which looks most likely. It is possible Morrison may choose to hold a half-Senate election (mandatory before 21 May 2022) and a separate House election as late as 3 September. This option is unlikely, however, especially since it would require additional effort.

Of course, there was the “But COVID” excuse, even though most other developed nations managed to hold virtual parliamentary sittings throughout the pandemic. But perhaps we should give the PM the benefit of the doubt, since, unlike Australia, those were all nations with fully functioning up-to-date internet services.

Avoiding the tedious process of parliamentary attendance, of course, has the dual benefit of reducing the workload as much as possible, while simultaneously providing a perfect opportunity to avoid scrutiny (see below).

MOST RORTS AND SCANDALS

UPSETTING AS MANY TRADE PARTNERS/ALLIES/ WORLD POWERS AS POSSIBLE

This Morrison regime has managed to piss off:

HELPING THE LEAST AMOUNT OF PEOPLE

Scotty and his Government have attempted to shut down Medicare, the NDIS, the ABC and destroyed Australia’s chances of a 21st-Century national broadband system.

They have raised university fees, gone after the vulnerable and hounded them to their graves with the illegal Robodebt scheme. They’ve ignored women, Indigenous Australians, climate change and bushfire survivors and tortured refugees and whistleblowers.

They have stuffed up the COVID vaccine rollout and quarantine measures and the aged care system. And shamelessly funnelled money into their own electorates and those they wish to attain.

These are deliberate tactics. Government money and assistance is only for people who sponsor the Coalition — or at least vote for it.

OVERSEEING THE MOST UNAVAILING LEGISLATIVE AGENDA

All of which leads us to label this Morrison Government a do-nothing government, with only one overriding aim — to stay in power at all costs. We may be wrong, but we cannot think of a government in modern Australian history with a more ineffectual legislative agenda than this one.

Looking back, every administration preceding Morrison’s managed to achieve at least one piece of memorable legislative reform.

Malcolm Turnbull had the ‘Same-Sex Marriage Bill‘ and the ‘Banking Royal Commission’.

Even Tony Abbott – the master undoer and possibly the next most under-achieving PM after Morrison – had the China-Australia Free Trade Agreement.

Among a record number of legislative measures, Julia Gillard is remembered for the ‘Royal Commission into Institutional Responses to Child Sexual Abuse’ and the National Disability Insurance Scheme (NDIS).

Kevin Rudd ratified the Kyoto Protocol and made a formal apology to the Stolen Generations.

There was a lot wrong with the Howard Government but Johnny will still be remembered for his landmark National Firearms Agreement, as well as the Goods and Services Tax.

Paul Keating led a reform agenda among which the Superannuation Guarantee (Administration) Act and the Native Title Act inspired by the Mabo case, are highlights.

Even Malcolm Fraser, sandwiched between the majorly transformative Labor administrations of Bob Hawke and Gough Whitlam, managed to establish the Human Rights Commission and the Special Broadcasting Service (SBS).

Apart from repealing acts, like Medevac, wielding a big stick via acts like the ‘Social Media (Anti-Trolling) Bill’, the paradoxically named ‘Religious Discrimination Bill’ – which seeks to discriminate – and the ‘Voter ID Bill‘ (none of which have been passed or ratified), or avoiding promised legislative reform, like the establishment of a Federal ICAC (now pending for over 1,100 days), for what non-self-serving legislation will this Government be remembered?

Scott Morrison has spent the last few weeks talking about online trolls when in reality some of the most dangerous people on the internet are the members of his own govt spreading disinformation & stoking fear.

He needs to show some leadership & make them stop or kick them out. pic.twitter.com/SucEaZhfs8

This is an abridged version of an editorial originally published in the IA weekly newsletter. Subscribe now to read the full version online in the IA members-only area.