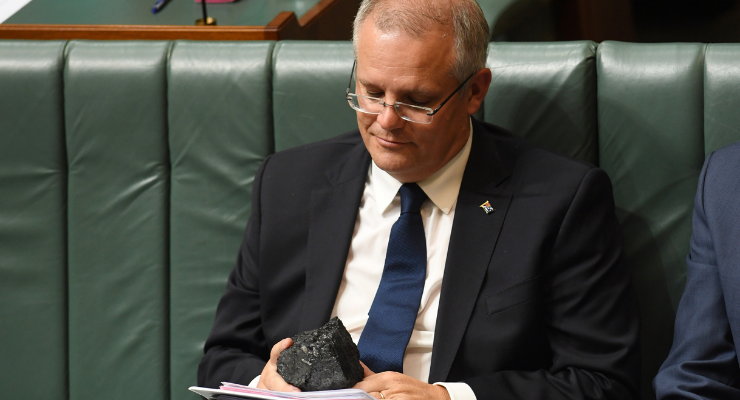 Our coal-fired power plants will close their doors three times faster than we thought, Guardian Australia reports, and quicker than either major political party thought in their climate policies, the SMH adds. That means about 60% of our fossil fuel power sources will cease operating by 2030 and our main electricity grid will be coal-free by 2043, according to the Australian Energy Market Operator’s (AEMO) new report, which has been 18 months in the making and due to be released today. It’s very good news for Australia — we have the highest emissions from coal in the whole world per-capita. That’s nearly double those of China.

We are entering into the era of renewables, the report continues. It found there’ll be a nine-fold surge in big renewable energy projects like wind and solar farms by 2050, The New Daily reports, when we’ll see five times as many solar panels on our homes. And we’re ahead of schedule — during the pandemic we’ve actually seen 40% more renewable projects than we thought we would back in 2020, the report continues. Our mates in South Australia are steaming ahead — mind the pun — with a 76% reliance on renewables during the month of November.

THE KIDS ARE ALRIGHT

Kids aged 5-11 will begin to receive their vaccinations prior to the 2022 school year, as the Australian Technical Advisory Group on Immunisation (ATAGI) will today recommend the Pfizer vaccine for the cohort of about 2.3 million, news.com.au reports. Children usually only get mild COVID symptoms, but longer-term complications can be a big problem, ABC says. Appointments will begin on January 10, but the kids won’t get the full dose — they’ll get about a third of the dosage given to people aged 12 and over. Prime Minister Scott Morrison says it’ll be nothing out of the ordinary for the 95% of 5-year-olds in Australia who are fully vaccinated against other diseases, as The Australian ($) reports.

Morrison is meeting with state and territory leaders at national cabinet today to discuss the Omicron variant and the plan for our international borders. So far 42 people in NSW have tested positive to the mutant strain, the SMH reports, after the state recorded 420 overall cases of COVID yesterday (that’s the highest since mid-October). Health authorities are urging about 610,000 NSW people who got their second jab five months ago to make plans to get the booster. Interestingly, La Niña is actually creating a heightened risk of outbreaks, Guardian Australia reports, as people are spending more time inside together due to the rain.

BIRDS OF A FEATHER

Defence Minister Peter Dutton has told manufacturer Airbus the government is canning their entire fleet of European-designed Taipan army and navy helicopters, The Australian ($) reports. We’ll be replacing them with 40 Blackhawks and 12 Seahawks imported from the US, which the paper says will cost us $7 billion. Sound familiar? It follows the decision to cancel our French-built submarine order in favour of US nuclear-powered subs, too, and could be just another way we’re settling into our little AUKUS ménage à trois. Indeed overnight France’s ambassador to the Indo-Pacific said they’d restored some trust in the US but hadn’t in our government, who he claimed are still “in denial” about our handling of the axed contract.

Like the French submarine project, the Taipans caused the government major grief: in 2019 a helicopter en route to pick up Chief of the Defence Force Angus Campbell was found to be faulty, Guardian Australia reports, and then the entire fleet was grounded for weeks in June this year because of safety fears, ABC reports. Defence was actually spending $37 million on leasing private helicopters at the time, citing Taipan’s “technical issues and a poorly performing supply chain and support system”, a cost which Labor’s Pat Conroy slammed as “beyond a joke”.

Folks, there’s a cube on the Moon. A Chinese rover named Yutu captured a photograph of the cube, which was about 80m away. So what exactly is this curious moon cube? Did aliens leave humanity an incredible artefact? Could the cube be a sign of a higher energy force? Or is it just your average squarish boulder? It should only take two or three days for the rover to reach the cube and reveal more — two or three lunar days, that is, which is two or three months here on Earth. The rover, Yutu, actually made history when it became the first to land on the dark side of the moon. Because the moon is rotating at the same speed that it is circling our planet, we never see the far side — it’s always facing away from Earth.

It’s actually not the first time something weird has been spotted on a surface in the sky. You may have seen the Mars face before — it was captured in 1976, when a spacecraft captured what looked like a giant rocky face on the surface. More recent photos (with far better photographic technology) put a damper on conspiracy theories about extraterrestrials — it turned out to be your run-of-the-mill landform. So is anything out there? Well, IXPE could be about to tell us — the incredible new telescope just been flung into orbit by NASA and it’s going to provide never-before-seen X-rays of objects like Sagittarius A*, the supermassive black hole at the centre of our galaxy. “It’s truly a new way of looking at the sky,” NASA’s Thomas Zurbuchen reckons.

Hope you have a restful weekend ahead, folks.

I love utes. How good are utes? And how good would a big ute be? That’s what I’d say … I mean, you can have a big ute on a stick; what I want to see is tradies in utes on work sites building homes for first home buyers.

The PM received a bit of a curveball question about whether he, like Victorian Premier Dan Andrews and Opposition Leader Anthony Albanese, supported a “ute on a pole” attraction in Geelong. Morrison managed to wrangle his answer back to his talking points — he was in town to spruik housing — though his initial response about loving utes did have a whiff of Steve Carell in Anchorman’s iconic “I love lamp” scene.

“Perrottet’s vision of reformist states overriding a reluctant, obstructive Commonwealth is a natural evolution of the centrifugal reallocation of power from Canberra to the states that occurred as a result of the pandemic, which made states the dominant shapers of national policy in pandemic response.

“It also exposed the delivery incapacity of Morrison and his government, which ignored the issue of quarantine facilities and badly bungled both the sourcing and rollout of vaccines (which drew a quip at Morrison’s expense from Perrottet).”

“As predicted by Crikey in April, he’s well on his way to a post-politics career as an online political influencer who monetises his audience. Soon he’ll be fully unleashed and largely irrelevant.

“What he leaves behind, however, is a blueprint for other conservative politicians. In a world where attention is power, any politician can dog-whistle to the fringes, embrace their key figures, and revel in any backlash. We’re already seeing other MPs take lessons from the Christensen playbook. Senator Matt Canavan is now a professional social media troll …”

Big spender, thy name is Josh. But why don’t voters know that?

“Of course, Coalition defenders will argue the pandemic necessitated all that spending. Maybe. But the FBO shows that Australia got through the global financial crisis spending only 25.9% of GDP in 2009-10, the year of world-leading stimulus expenditure.

“Australia’s GDP grew strongly through productivity increases, retention of export revenue, steady wage rises, vast infrastructure development and minimum waste … In contrast, this time around productivity is stagnant, export profits are largely untaxed, wages have flatlined, infrastructure investment is at an all-time low and waste is in the multiple tens of billions.”

What to know about China Evergrande, the troubled property giant (The New York Times)

Sen. Bob Dole lies in state at the US Capitol as Biden pays respects (CNN)

Why the Marlboro man will probably beat a lifetime tobacco ban — Michelle Jongenelis (The Age): “[2.9 million] is the number of people aged 14 years and over who reported being current smokers in 2019. Smoking remains Australia’s leading risk factor for death and disease. It will kill around 21,000 smokers every year and lead to 1 in 5 cancer diagnoses. It will cost our economy $136.9 billion every year, considerably more than the $14.75 billion generated by tobacco excise.

“We must create a smoke-free generation by prohibiting the sale, delivery, and supply of tobacco products to those born after a certain date, thus making it illegal to ever provide these individuals with such products even after they turn 18 years of age … Seems like a no-brainer doesn’t it? What could possibly get in the way of Australia passing legislation that will save millions of lives? Perhaps the fact that some of Australia’s political parties continue to receive donations. Tobacco giant Philip Morris International donated $55,000 to the Nationals in 2019.”

Australia’s climate wars may be over — Phillip Coorey (The AFR): “There is a very real prospect of one or more new independents entering the Parliament on the back of the rapidly growing Climate 200 movement, the campaign being driven by climate activist Simon Holmes a Court. This week, he expressed confidence the campaign will raise as much as $20 million as it bids to oust moderate Liberals from their safe seats predominantly in Sydney and Melbourne.

“Articulate, economically conservative, socially progressive and pro-climate-action female candidates are seeking to oust Liberals who are ideologically identical but bound by the party’s more rigid policy positions. There are eight candidates in the field thus far, in seats including Hume, Wentworth, Mackellar, North Sydney, Goldstein and Josh Frydenberg’s seat, Kooyong. If they all won, the Liberal Party would be devoid of its leading moderates who, ironically, are the ones who advocate internally for climate change policy and fought to save Malcolm Turnbull’s leadership.”