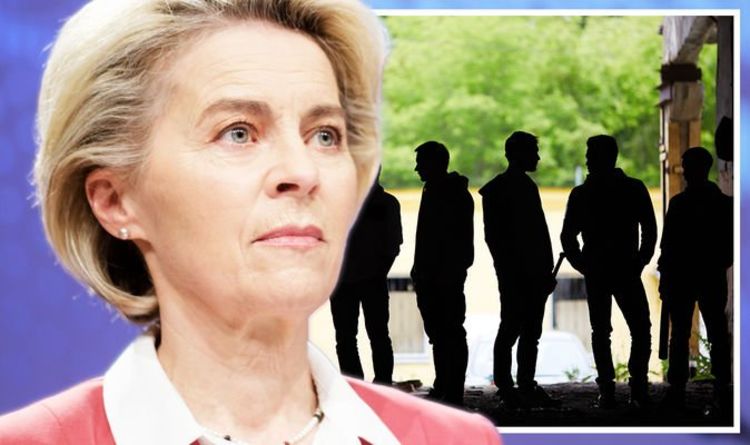 Brussels is currently facing down Belarus at its outermost border. President Alexander Lukashenko has been accused of fanning a migrant crisis in allowing desperate people travelling from the Middle East and North Africa to reach the bloc. The area is sparse, full of dense forest, with temperatures regularly dropping below zero.

Many NGOs say a mass humanitarian crisis has unfolded, with countless men, women and children without food, shelter or warmth.

Professor Matthew Longo, a political scientist at Leiden University in the Netherlands, said what Mr Lukasheko is doing — using Belarus’ border as a weapon against the EU — is nothing new.

He explained how history is full of states using their borders as a way of pressuring their enemies, often allowing migrant populations to pass through their countries in order to reach the next.

Having studied cartels in Mexico, he said Europe could soon face something similar.

EU crisis: The bloc could be at risk from ‘cartels’ in the future, Express.co.uk was told (Image: GETTY)

Poland: Police have started to check cars crossing into the country from Belarus (Image: GETTY)

Along Mexico’s northern border with the USA, cartels have long reaped major profits from smuggling migrants from all across Central and Southern America, as well as the rest of the world, into North America.

A similar setup has been heard from the migrant crisis in Europe, where desperate people pay vast sums of money as a ‘guaranteed’ way to enter countries like the UK, only to be met by a a small rubber dinghy on the banks of the Mediterranean, the trip often sold to tens of others, making for cramped and dangerous journeys.

Prof Longo noted that operations seen in Europe were nowhere near as organised as Mexico’s cartels.

However, he said that it would not surprise him if EU buffer states — countries in North Africa and Eastern Europe, former Soviet states — in the future formed organised cartels of their own, and held Brussels to ransom.

Discussing Mr Lukashenko’s use of his border with the EU, Prof Longo told Express.co.uk: “I think in general, once the border became so easy to blackmail, once the EU became this place that puts so much political cache on stopping people from getting in, of course it becomes a space that people on the outside will look to exploit and be provocative.

Migrants: Many people seeking asylum have found themselves trapped at the border (Image: GETTY)

“My sense is that insofar as this is all just a Lukashenko power play, I don’t see why this wouldn’t become the norm.”

“You’ve already had it in the US-Mexico borderlands where it wasn’t governments but cartels.

“But, cartels are basically governments.

“A cartel in Sinaloa runs Sinaloa: it runs the resources, it runs the distribution of the wealth, and has all the arms and the police and state bought out.

“The idea that you could use or levy the power of the border for concessions against big powers is not remotely new, it’s just that in the European context, we don’t really know it yet.”

He went on to note that human smuggling in Mexico is often carried out by those with great power, something which is not the case in Europe.

But, he added: “It wouldn’t surprise anyone looking ten years down the road if you saw the cartelisation of all these European buffer states.

“All these states realise that the EU is extortable, and so the EU is in a tough place, because once it’s politicised its borders as much as it has, it finds itself in a particularly bad place.

“And, it wouldn’t surprise me if, especially in one of these more power vacuum countries like Libya that acts as a buffer state, if you started to see basically a non-state border power like a cartel form, that’s as powerful.”

Mexico: The country’s northern border with the US is home to myriad migrant camps (Image: GETTY)

Cartels in Mexico have, in recent years, played an increasing role in the surge of migrants in the Mexico-US border crisis.

Experts say they make big profits helping smuggle people across, those profits comprising a significant and growing portion of their riches.

Similar operations have been found in Europe.

Last month, Spanish police broke up a gang that smuggled hundreds of migrants across the Balkans and into the EU.

Police from nine countries were involved in the operation.

The network is believed to have smuggled at least 400 Pakistanis into the EU in the last eight months, cramming them into the back of trucks and charging them up to €20,000 (£17,000) each for the journey.

Each truck carried more than 50 people in a space the size of eight square metres.

Alexander Lukashenko: The Belarusian President admitted that his forces may have helped migrants (Image: GETTY)

In one case, Spanish police said they found 77 people, including four children, packed tightly into the back compartment of a small truck.

The organisation said the group had earned €2million (£1.7million) in illegal profits

It is thought that this gang is just one of a number operating across the continent.

Migrants in camps around Europe say there is an increasing use of an informal financial network, known as hawala, by smugglers working as far north as the UK.

Estonia and Lithuania: Border guards there have ramped up their observation duties (Image: GETTY)

The payment network, which operates largely without an easily traceable paper trail, helps smugglers mask transactions from authorities and avoids the risks of taking cash across borders.

Migrants say they like not having to carry large amounts of cash and that this mode of payment reduces the risk of being swindled or robbed.

Meanwhile, at the Belarus-Poland border, migrant crossings have decreased, but tensions between powers remain.

Lithuania has since extended a state of emergency at its border with Belarus and at camps hosting migrants who arrived from there until January 15, 2022.

The emergency allows border guards to use “mental coercion” and “proportional physical violence” to prevent migrants from entering Lithuania.