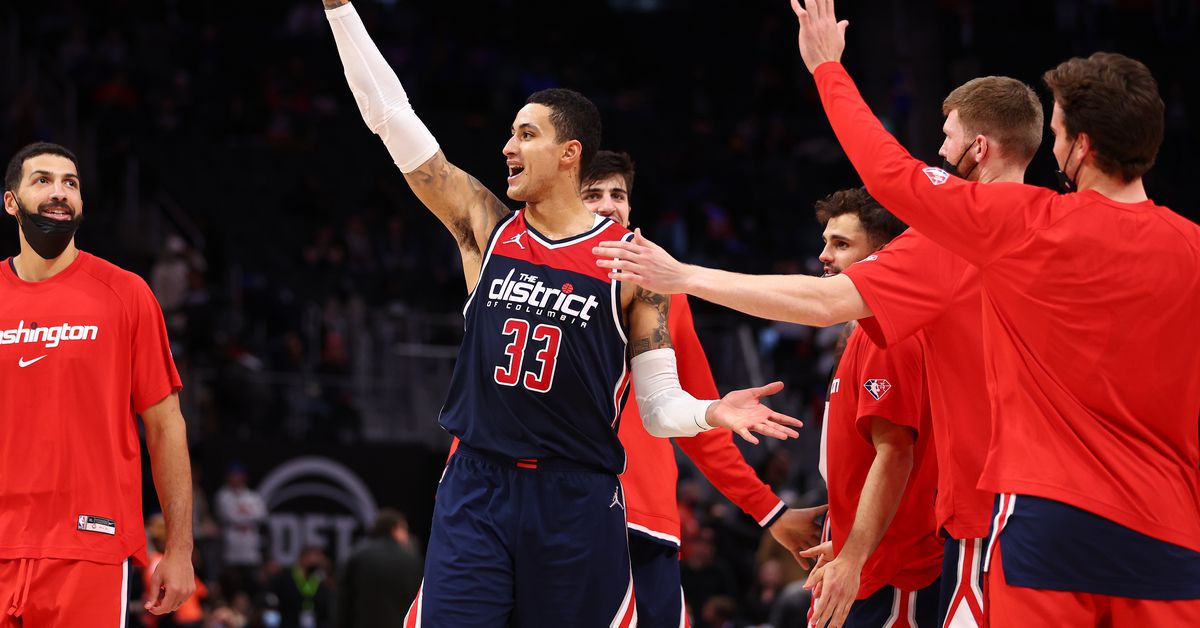 It’s easy to view Kyle Kuzma as something of a joke. Since he entered the league on the Los Angeles Lakers as the No. 27 overall pick in the 2017 draft, Kuzma has been a player who casts a significantly larger shadow in the broader basketball conversation than his play would typically warrant.

Kuzma was crowned as the Lakers’ next savior by a certain section of the fanbase after a solid rookie season highlighted by some impressive scoring flashes — including 41 points in three quarters against the Pistons. There was only one problem: the Lakers were terrible for the fifth straight season, looking like a group of misguided youth that had some legit talent but didn’t know how to win. The Lakers’ real savior would arrive the next summer when LeBron James signed as a free agent, and suddenly everything about the team’s young rebuild was thrown into flux.

While Lonzo Ball, Brandon Ingram, and Josh Hart would be exiled to New Orleans as James helped orchestrate the trade for Anthony Davis, Kuzma remained. Part of the reason was because the Pelicans didn’t think all that highly of him. At that point in his career, Kuz was mostly a chucker who was bad on defense and spent too much time on Instagram. But as James’ powerful grip took hold over the team in the coming years, Kuzma worked his way into being a dependable part of a championship team.

Kuzma didn’t start for the Lakers during their run to the 2020 title in the bubble, but he was LA’s fourth leading scorer and suddenly an asset to the league’s No. 1 defense. No, Kuzma didn’t become the star some fans thought he might, but in a narrow role playing next to two superstars, he was actually becoming a solid role player.

It didn’t change the reality that everyone not named James or Davis was living on borrowed time in LA. After the Lakers lost in the first round of the playoffs the following year to the Phoenix Suns as their two studs battled injuries, the team went hunting for a third star in the offseason. They landed on Russell Westbrook, shipping Kuzma, Kentavious-Caldwell Pope, on Montrezl Harrell to the Washington Wizards to get him.

Kuzma’s identity had been so tied to LA since he entered the league that the thought of him in a far less glamorous market was amusing in its own way. Fear not: Kuzma has very much remained himself off the court, all the way down to wearing a comically oversized pink sweater on his way to a recent game.

If Kuzma is the NBA’s premier Instagram model outside the lines, his social media presence belies a toughness and skill set that makes him something of a blue collar forward in today’s era. There’s real substance to appreciate about Kuzma’s game at this point in his career, and it’s helped the Wizards get off to one of the most surprising starts in the league.

Pretty much every team could use a player like Kuzma. At 6’10 with a 7-foot wingspan, Kuzma brings serious length to the defensive end. He’s upped his activity and his attention to detail over the years to become a legitimate plus defensively. On offense, Kuzma spaces the floor and provides volume three-point shooting for a shot that goes in just enough to be valuable.

Kuzma also brings a little more to the table around the edges than you might expect. For one, he’s a surprisingly good defensive rebounder, often darting across the court to high-point the ball and finish the possession. His 24.2 defensive rebounding percentage is tops on Washington, and the highest mark of his career. While scoring off the bounce has long been Kuzma’s Achilles heel offensively, he’s become a nice passer on the move over the years. His 13.3 percent assist rate this season is also the highest of his career.

Kuzma put his full skill set on display against the Detroit Pistons on Thursday, scoring 26 points on 4-of-10 shooting from three-point range. He hit a dagger three in overtime to give Washington the win, and waved bye-bye to Detroit fans.

Kuzma is playing nearly 33 minutes per night in Washington, another career-high. His length allows the Wizards to get away with Harrell at the five, and those lineups with the other starters are +15.5 points per 100 possessions according to Cleaning the Glass. Kuzma has a way of just making everything fit together. Who would have thought that given his reputation in his early years?

Kuzma has become good enough as a shooter to make his volume gunning from three beneficial for his team. His impact is fully matching his tools on the defensive end as a four who can switch some screens, provide some paint protection, and finish out a stop with a rebound. Kuzma is still mostly dependent on his teammates — more than 72 percent of his field goals have been assisted this season — but he’s the type of player who makes the game easier for everyone else by spacing the floor and leveraging his length to muck things up on defense.

Influencers aren’t supposed to have blue collar jobs away from social media, but that’s the sort of player Kuzma has become. His fashion statements are still loud, but his contributions to winning are understated. That’s no joke.