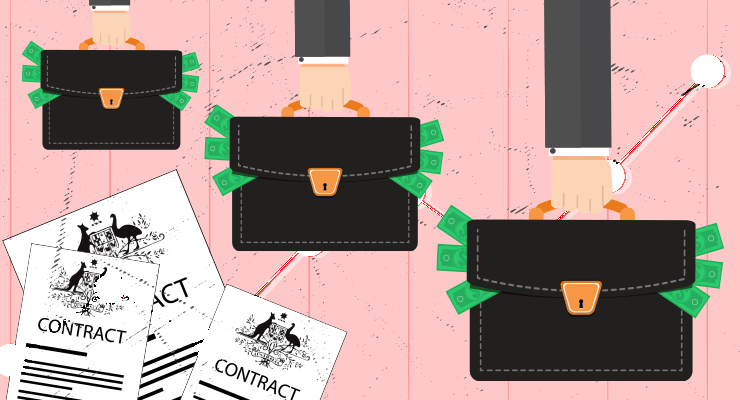 It’s been a big year for McKinsey & Company. The blue-chip management consulting firm, favoured by dictators and drug companies, saw an explosion in lucrative federal government contracts, entering into $46.6 million worth of deals in 2021, according to analysis of AusTender data.

It’s a marginal increase on the $45.5 million McKinsey made in 2020, and together the past two years represent an expansion of The Firm’s (as its employees call it) work with the Morrison government. Since the start of 2020, McKinsey received nearly $100 million in government contracting. Between 2017 and 2019, it made a comparatively sober $23 million.

It’s part of a consultant takeover of what was once core government work, buried under a blanket of secrecy that has critics concerned about the long-term health of the Australian Public Service.

The brains behind the strollout

There’s not a whole lot we know about the work McKinsey does for the government. On the whole, it covers pretty broad terrain — from “strategic advice” to the Department of Prime Minister and Cabinet ($2.3 million), to helping Austrade “reimagine tourism” ($1.6 million), and conducting analysis on the affordability of a fighter jet ($1.4 million for two weeks’ work).

Mostly, however, its work is pretty opaque, with vague descriptions like “management advisory services”. That’s because AusTender does not require much real disclosure about what consulting firms do with public money.

But we do know McKinsey consultants were working behind the scenes on some of the biggest policy issues of the year: the vaccine rollout, and the Morrison government’s net zero emissions modelling.

Before the Delta outbreaks, Australia’s vaccine rollout got off to a sputtering start, with uncertainty about eligibility, supply bottlenecks and mixed messaging. While McKinsey wasn’t solely responsible for those teething problems, we have little clarity about what exactly it was doing. An earlier $660,000 contract with Health to provide strategic advice on the rollout returned nothing more than a brief summary of global vaccine development. And it reportedly urged Health to adopt a “sit and wait” approach when vaccines were being developed last year, leading Australia to fall behind other countries in the race to procure doses.

Meanwhile, McKinsey received a further two contracts totalling about $4 million to provide advice on the development of onshore mRNA vaccine manufacturing capability. Despite this, there’s been little clear progress on that front.

McKinsey’s big year hasn’t happened in isolation. The growth in the use of consultants has doubled since the Coalition came into government, and there are real concerns about the impact this has on the APS. A recent report from the Senate Finance and Public Administration reference committee pointed to the “ongoing, unnecessary use of consultants” as eroding the APS’ strategic policy capability.

Labor says the use of outsourcing has increased under the Morrison government. Its finance spokeswoman Katy Gallagher tells Crikey the past three years has seen widespread and expensive outsourcing of the public service.

“This has not happened by accident, but rather is a conscious decision by Scott Morrison to erode the capability and capacity of the public service and, at the same time, ensure that the outsourced work is shielded by dodgy secrecy arrangements,” she said.

Grattan Institute CEO Danielle Wood says that although she thinks there’s a role for consultants, particularly when they bring in special skills, there are concerns about them taking over core government work.

“The issue with that is you start to de-skill your public service, you lose that policy muscle memory and corporate knowledge,” she said. “If you start to erode that capability it gets harder to do good policy work.”

The government’s modelling for its net zero target, conducted by McKinsey through two contracts with the Department of Industry worth more than $6 million is a classic example of the public service being shafted. There’s no indication in AusTender that the contracts were for climate policy.

After Morrison’s widely criticised plan was released, Crikey asked the department for details about the contracts and received no reply. The price of the modelling was revealed later at a Senate estimates hearing, where the CSIRO was left wondering why it’d been rejected in favour of a multinational firm.

Meanwhile, McKinsey stays winning. Its work for the Australian government is a drop in the ocean for a firm that made US$10.5 billion in revenue in 2019. The more lucrative work comes from less savoury clients. It does work for the fossil fuel industry, helped Saudi Arabia target dissidents and, this year, settled with US regulators for $600 million over its role in fuelling the opioid epidemic.

Despite all that, it’s still heavily favoured in Canberra.