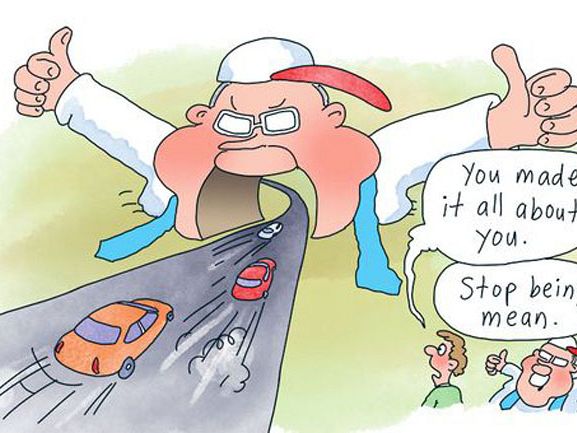 It seems the Prime Minister is blaming the choice of tyres while ignoring Team L-NP’s overall poor performance.

As Bathurst tragics were mourning the first event without the iconic Holden, a few years after his government starved its manufacturers into submission, Scott Morrison slinked around the iconic racetrack, not quite the iconic Prime Minister, jumping over pitlane into pole position without ever qualifying, retrofitting himself onto any engine mount he could find. All on the sniff of an oily rag.

As he stammered around the track with Mark Skaife, we must look back at the final gruelling two week parliamentary enduro leading up to Bathurst. Hoping to finish the season on a good note, Team L-NP looked a shambles from the outset. Engine failure and issues with the transmission plagued its approach to the end of a pockmarked racing season.

The event began with renegade L-NP senators crossing the floor to join One Nation‘s anti-mandate bill in a performative stunt for the hardcore fans, while Senator Pauline Hanson watched on from pitlane via telescreen. Somewhere now in the middle of the pack, her rise from the bottom is an upgrade from Dancing with the Stars, her journeywoman status is now demonstrated at Team PHON with slick media packages, backed up by the L-NP senators expressing signs of freeagency.

Whatever strategy the unlikely bedfellows were planning, it was unravelled by the honest driving of a Tasmanian owner/operator using an modified United Australia Party (UAP) running body and a lot of home made components.

It is no longer a surprise that the once dogged Senator Jacqui Lambie has seen continual improvements over her journey. Speaking to journalist Peter FitzSimons, she recently reflected on her years at Team UAP, reflecting on her “Hanson” like approach to driving, degloving tyres in practice without the ability to preserve them. This candid interview demonstrated those old habits died hard with the brilliant display we saw the other week.

Seeing an opening in the renegade pack, she blindsided them on Skyline, took the inside corner on the Esses and Dipper, roared past them around Forrest’s Elbow and left them for dead on Conrod Straight. Excellent driving.

Without the constraints of the big teams, Lambie has been one of the raw talents able to give us demonstrations of pure racing, her increasing involvement in the moral and operational strategy of her small team has brought a sense of weight and maturity somewhat lacking from the sport today. She has been willing to consider different approaches to her tradecraft, reaching out to the fans to help her improve her driving. And it shows.

Meanwhile, back in the wind tunnel, the Prime Minister was back at the dyno, trying to streamline a Religious Discrimination Bill that was getting some resistance from senior engineers. This seemed too cosmetic to warrant an ill-conceived olive branch to the self-proclaimed minority of those who voted against the Marriage Equality Act — those relegated to the stock car drivers of history.

To add to the confusion, the new Quality Assurance Chief was light on credentials, highlighting a potential skills shortage in the area, allowing non-compliant fairings to run off the shelf from day one on his job, looking to quell growing doubts over his credentials, team media assures us that Andrew Wallace is ‘still finding his feet’.

Some are not even bothering to post competitive times, preferring to post mediocre times in an everchanging field, while others don’t seem to be racing at all. Despite encouragement from his team to remain, it has left many in the industry to ponder if his heart was ever in it to begin with and why he would ever say such a thing.

Labor has run a fairly ordinary calendar year, running a lean strategy and focusing on research and development advantages into the next season. Yet these gains may be undone with a groundswell and a generational change in technology and mindset — all could be lost if the fans and the climate demand a more rapid change from petrol to electric.

The L-NP, desperate from the loss of experienced crew and some promising drivers, looking at its outdated build and realising this might be its last attempt at glory, is looking toward former disgraced and disqualified prodigy, Gladys Berejiklian, to add some much needed calm into the team. This is despite her bringing the sport into disrepute, awaiting a decision from the race Marshalls (stewards) and in spite of no indication from her personally. Regardless, due to the lack of good news at team L-NP, it has the racing journos licking their lips with hypothetical anticipation and reporting accordingly.

If @GladysB ran for Warringah…. It would be a big headache for Labor.

Her very presence on the campaign would permeate well beyond the north side.

For a long time, race organisers have grown callous to the demands of the most important element of the event — us, the fans. Tending to look towards a small pool of advertisers and favouring lucrative arrangements for the exclusive rights of the titans of industry, it has ignored calls for a return to a more pure and traditional form of representation and transparency in the sport.

In the ’90s they banned the 4WD Nissan Skyline from competing with the RWD Holdens and Fords in the supercars, because it was out of spec with the rest of the pack. With that in mind, when will they choose to review what’s under MP Clive Palmer‘s bonnet? For someone driving a five year old car with lots of miles, one that doesn’t fit many of the current standards and considering this stark reality, Scott Morrison has done well to assume pole. But he must lose this race. It will be up to us to ensure that he is retired with the Skyline, out of spec with the spirit of Australian racing, discontinues on the production line of our proud history.

But the Holdens are going and all the Fords are American now. As the Holden Racing Team go into history like the Ford Performance Vehicles, as the Walkinshaw, HSV, Tickfords and major political parties go into oblivion, as the Lowndesies, Brockies, Hewsons and Keatings enter the hall of fame and all the teams and drivers splinter into silos, what will happen to the essence of Australian motorsport?

With a lack of vision, a reliance on the big dollars of advertisers, the allowance of confusion regarding creative direction and misinformation from wayward executives, some fans are turning away from the sport altogether. No wonder the performances of the independent drivers are increasingly resounding with both the Holden and Ford fans, the fact the at the major teams are not noticing this, does not herald bright days ahead for the big teams.