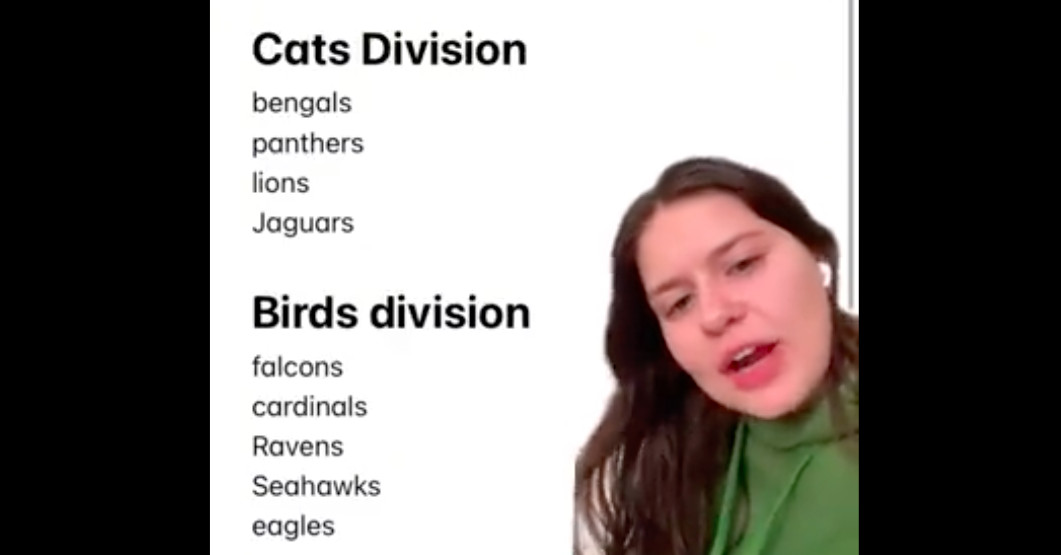 TikTok user @btrait has a unique new way to redesign the NFL’s division, and I think they’re perfect. Essentially she’s grouping teams on type, rather than geographic location — and it’s resulting in some really interesting matchups.

The idea is that instead of having natural enemies in nature face off, we have similar types of animals, humans, and mythological beings dominating their own genus — before then facing off with one another.

This leaves us with the following divisions:

On first pass I know this seems ridiculous, but it’s unintentionally perfect. So the big thing is that I know we have really unbalanced divisions, as is. However, I’m not sure that’s really a problem. As it stands we have six wild card spots in the NFL as is. What if we used those as a way to balance it out?

For instance, the Birds and Humans would automatically get a wild card spot. Because of their division size they’ll always get two teams in to the playoffs each. The Horses and Working Class would never be eligible for a wild card, because of their three team division size. This gives us another four to be split around the league, based on overall record like we have right now.

Then, think about how great some of these divisions are. The working class, made of the 49ers, Packers, and Steelers is a beautiful celebration of some of the legendary franchises in NFL history.

The Cats division is a glorious, inconsistent mess of teams that beat themselves more often than they beat their opponents.

Humans? Wow. It’s brutal, but if this existed in 2021 we would have had multiple games of Tom Brady vs. the Patriots.

Finally, this leaves so much room for expansion inside the NFL. The league is already toying with ballooning to 40 teams. Instead if announcing a team, then trying to fit them in based on geography, we could simply re-balance the league by demanding a city accept a genre of team name.

A full league rebalance would be incredible and it’s all thanks to this TikTok genius.