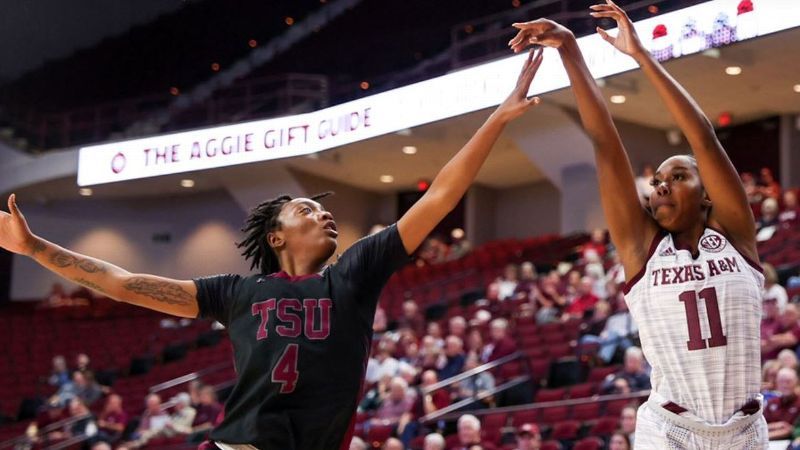 Texas A&M coach Gary Blair collected his program-best 439th victory with the Aggies, surpassing Shelby Metcalf. Blair is third among active coaches and 12th in Division I with 847 wins. He announced on Oct. 28 his planned retirement at the end of the season.

Wells, Qadashah Hoppie, and Jordan Nixon were a combined 11-of-18 (61%) shooting from 3-point range against Texas Southern (0-5). The Aggies entered leading the nation in shooting from long range at 43.4% and extended their winning streak against non-Power Five opponents to 24.

Hoppie finished with 14 points and Nixon had 12 points and five assists. Aaliyah Patty added 10 points for the Aggies.

“I really like what McKinzie (Green) was doing, getting some of those open-court steals. We hadn’t had those in a very long time and that’s the speed that she can bring to the table. Our goal on defense was to keep them under 25%. They hit 30%, they hit some tough shots, I give them credit. They had 14 offensive boards, we have to do better but at the same time, we got 15. I thought my guards rebounded a lot better. We shot them out of the zone then the kids shared the ball against their man to man and we kept hitting. We’re a good three-ball shooting team and I’m pleased with the team, pleased with the crowd that came out and I was really pleased with how all 14 players were ready to play tonight.”

“I felt like back in the day when they had Shelby (Metcalf) and Nolan Richardson and some of the great coaches in the Southwest Conference here, it wasn’t all about X’s and O’s. It was about their personalities coming forward and Shelby had some of the most classic lines you’ve ever heard in your life. You need to realize who Shelby Metcalf was. He was a special guy, and his stories are legendary. I’m proud because it’s here at A&M and I got it done in the first third of my 19th year and I’m proud of that.”

“I knew this game was super important for us bouncing back, and I felt really good to shoot around (before the game). I have been feeling really good in practice and I know that I need to get up a certain amount of shots in order to make an impact with my team so that’s what I did today.”

“I feel like it was an outstanding game for us on the defensive end. We didn’t play our best defensive game against Texas, so we made it a priority to play a lot better defense. We just made it a point to play better game after that game.”

The Aggies hit the road to play TCU at Noon ET on Sunday, Dec. 12.