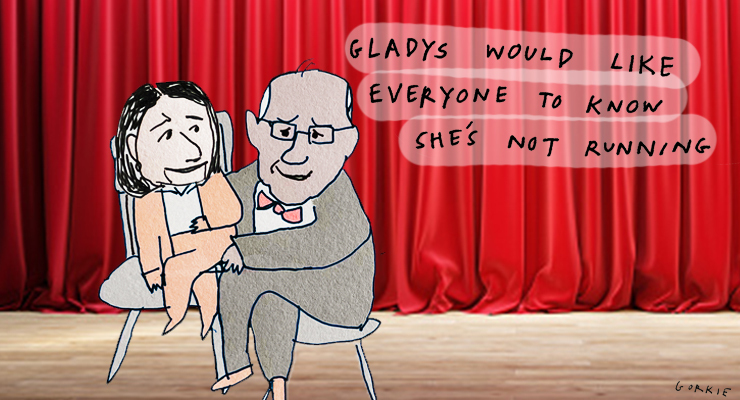 After weeks of speculation, this morning former NSW premier Gladys Berejiklian announced she had no plans to enter federal politics.

“I won’t be contesting the seat of Warringah or any other federal seat for that matter,” she said on 2GB radio.

But in true Liberal Party fashion, she wasn’t the first to make the announcement. The news was broken first by Prime Minister Scott Morrison in an exclusive drop to The Australian.

“Gladys has been an extraordinary leader throughout the difficult past few years,” he said. “She has been a rock for the state as well as a good friend to me and Jen.

“As much as I and other senior leaders in the party … would welcome her entry back into public life, we also ­respect her choices about the ­direction she would now like to take in her life.”

He’s a man quick to use women’s news and women’s careers for his own political purpose and gain. He spoke about sex discrimination commissioner Kate Jenkins’ report into parliamentary workplace culture before she had a chance to discuss her findings. He leaked news about the investigation into former staffer Brittany Higgins’ allegation of rape before she had a chance to find out about it, backgrounding staffers on her partner. And he made himself the keynote speaker of the Women’s Safety Summit.

Morrison uses women as political pawns, mobilising them for whatever cause suits his career without bothering to speak to them first. In the case of Berejiklian, he even extended deadlines for nominations for Warringah as he publicly lobbied her to run for the NSW seat, pushing her forward for a role she’d expressed no interest in taking.

Independent thought is not something encouraged by Morrison, and it seems he’d rather be the only one in a room speaking.

Former Liberal MP Julia Banks has said Morrison has a habit of running outspoken women “underground” through backroom meetings and calls to handle things “internally”. Look no further than the recent case of Tasmanian Liberal MP Bridget Archer being pulled into a back room for a “frank discussion” after crossing the floor.

It’s no wonder women are dropping from the Liberal Party like flies. Yet each time the PM is publicly rebuked for speaking over or on behalf of women, his behaviour doesn’t change.

Morrison started priming Berejiklian for the Warringah position early, saying when she resigned in August due to the NSW Independent Commission Against Corruption investigation she had “a lot more to contribute” to politics.

His support for her was entirely self-interest. Her popularity, despite the ICAC inquiry, has remained strong and Morrison wanted to piggyback on it. Polling shows she had a good chance of winning the seat from independent Zali Steggall. And Morrison desperately needs to replace the women bullied out of the party.

But almost everything Morrison said goes against what Berejiklian said.

Although he previously said she had been “done over” and was the victim of a “pile on” in a “kangaroo court”, anonymous Liberal sources repeatedly said Berejiklian was not interested in running for federal politics while the ICAC investigation was ongoing.

Morrison isn’t interested in listening to women. He just steals their news from under them. As the resignations of Julia Banks, Julie Bishop, Lucy Gichuhi, Kelly O’Dwyer — and now Berejiklian’s pushback — it’s only going to hurt the party Morrison touts as being one of the most gender-progressive in Parliament.