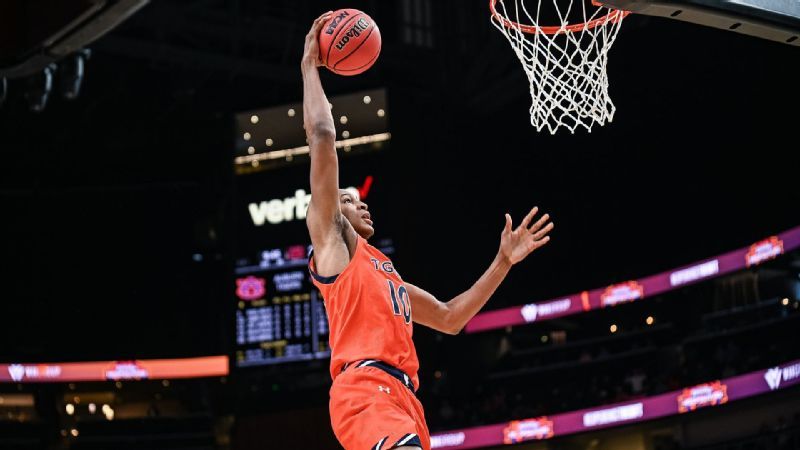 ATLANTA – Playing in State Farm Arena on Saturday, it felt more like Auburn Arena for the 18th-ranked Auburn Tigers who controlled the game from start to finish and pulled away with a 99-68 victory Nebraska in front a pro-Auburn crowd at the annual Holiday Hoopsgiving event.

“We just wanted to go out and play Auburn basketball,” assistant coach Wes Flanigan said after the game. Flanigan was filling in for head coach Bruce Pearl who is serving a two-game suspension. “Our guys obviously stepped up. They stayed true to who they were. We did an unbelievable job of sharing the basketball and playing the right way.”

Freshman Jabari Smith scored a game-high 21 points to lead Auburn while sophomore Wendell Green Jr. poured in 19 points, including 11 in the second half.

Smith, who was playing the first game in his home state of Georgia since the GHSA 3A state championship game in March, knocked down a 3 on the game’s opening possession and then capped his big day with a pair of dunks in the second half, including an alley-oop slam from Green who lobbed it off the backboard in transition.

Green caught fire in the second half with eight straight points and back-to-back 3s as part of a 20-3 Auburn run to put the game out of reach. The Eastern Kentucky transfer finished 4 of 6 from beyond the arc and added six rebounds and a team-best six assists.

“Wendell was unbelievable,” Flanigan said. “He told me before the game in the locker room, ‘Coach, I got you.’ And so I knew he was ready to go. I’m just so happy he was able to go out there and do what he does – that’s lead a game, that’s get people involved but also step back and make some of those long 3s, which opened up the game for us.”

As a team, Auburn made a season-high 14 3-pointers in State Farm Arena on Saturday.

In the first half, after Nebraska took a 7-6 lead, its only lead of the game, the Tigers responded with a 22-4 run and never looked back. The lead was 45-28 at the halftime intermission.

Auburn had five players score in double figures for the second straight game. Joining Smith and Green was the Peach State trio of Devan Cambridge (14), K.D. Johnson (12) and Jaylin Williams (10) who were all playing back in their home state of Georgia.

Cambridge drained a 3 in the opening minutes and then got the crowd off its feet again early in the second half with alley-oop dunks on back-to-back possessions. It was the junior’s fourth game with 10 or more points on the season.

Johnson has now scored in double figures in seven of the team’s first nine games.

Auburn finished with 26 assists while only turning the ball over eight times. The Tigers also forced 20 Nebraska turnovers, which led to 30 points and a 27-4 advantage in fastbreak points. Zep Jasper and Walker Kessler each had five steals.

It was the fifth straight win for the Tigers (8-1) who will return home to Auburn Arena on Tuesday night to face North Alabama. Tip-off is set for 8 p.m. CT.