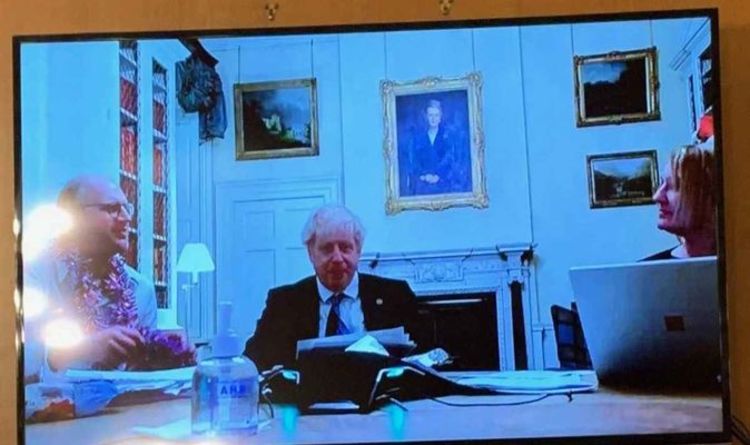 The Prime Minister is facing questions over a virtual Christmas quiz he hosted while London was under lockdown. A source said many staff members sat around computers, discussing quiz questions and enjoying fizz, wine and beer from a local Tesco Metro. Mr Johnson and his top aides were not drinking.

The Mirror has published a picture of Mr Johnson on screen, sitting underneath a portrait of Margaret Thatcher, as he read out questions.

The insider told the paper in one No10 office there were four teams, each made up of six people.

It happened on December 15 — three days before one of the gatherings being probed — and the Prime Minister was in company of two members of his top team.

One was wearing a Santa hat and the other, festively, tinsel around his neck.

The picture appears to show Mr Johnson breaking Covid laws, as mixing with aides was not allowed under Tier 2 regulations, which banned any social mixing between households.

Official guidance also stated: “You must not have a work Christmas lunch or party, where that is a primarily social activity and is not otherwise permitted by the rules in your tier.”

The revelations of the quiz seriously undermine the claims that no parties took place.

A source claimed: “It was just part of the culture.

“The PM turned a blind eye. He seemed totally comfortable with gatherings.”

A No10 spokesman said of the new revelations: “This was a virtual quiz. Downing Street staff were often required to be in the office to work on the pandemic response so those who were in the office for work may have attended virtually from their desks.

“The Prime Minister briefly took part virtually in a quiz to thank staff for their hard work throughout the year.”