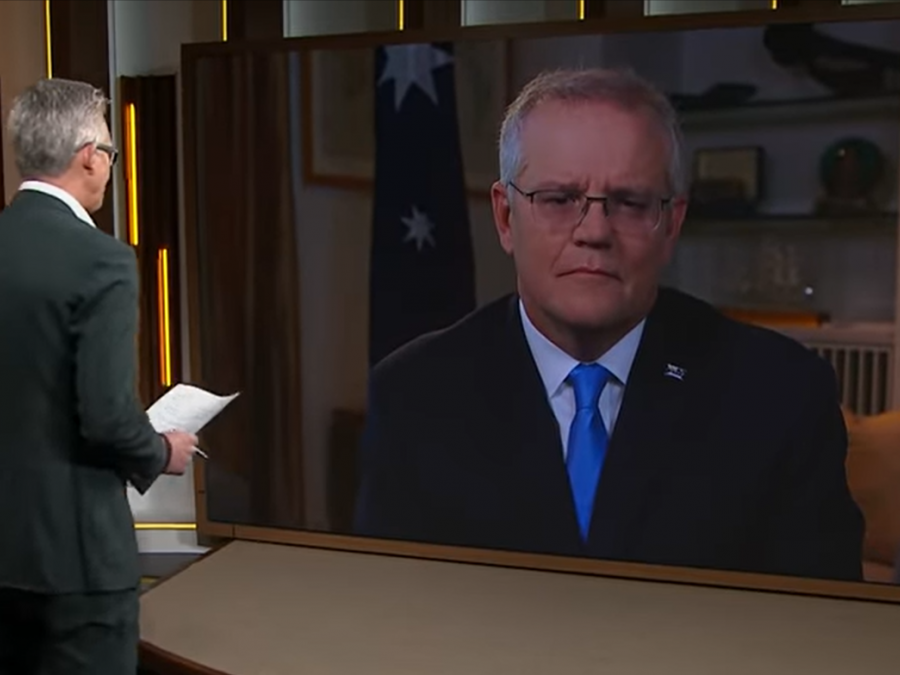 The case for a review of Insiders and sacking its producers, presenter and most regular guests has strengthened as the year has progressed, writes Alan Austin.

The Prime Minister is urging us to move on and you can see where they want to spend the coming weeks and months … on the better news we are seeing on the economy. The Reserve Bank this week had some pretty rosy forecasts… roaring back to life, unemployment dropping back to 4%, steady increase in wages… It’s clear this is what the Government wants to make its central election pitch.

This exemplifies one of many well-rehearsed deceptions Insiders deploys continually to spruik the Morrison Government. It bases the claim that the Coalition is superior in economic management on predictions of what might happen in the future.

This was repeated in the year’s final program on 5 December when Treasurer Josh Frydenberg claimed:

“We’ve already seen the OECD increase their economic outlook for Australia next year from 3.3 to 4.1%. You’ve got the RBA forecasting growth of up to 5.5% by the end of next year.”

None of the guest “journalists” pointed out that congratulations are due only on actual outcomes, not forecasts. The Morrison Government’s economic record has been the worst since the 1950s, a provable reality which Insiders consistently conceals.

Themes Insiders reinforces constantly, besides that the Coalition is managing the economy wonderfully, are that any economic declines are due to the pandemic; both sides of politics are as bad as each other on corruption; and Parliament has a problem with the abuse of women. All these are false in some way.

Realities not acknowledged are that Australia has tumbled in most global economic rankings, government waste is now in the hundreds of billions, corruption is endemic, most current federal ministers lie routinely, the Morrison Government is despised worldwide and Australians would be vastly better off with a change of government.

Australia is loathed globally not just for its climate action obstruction and callous treatment of asylum seekers but, as exposed by French President Emmanuel Macron, for its Prime Minister who lies without hesitation.

In the last Insiders program, the Australian Financial Review’s Phil Coorey denied Macron’s claim that Morrison lied to him, despite Coorey obviously not having been privy to all conversations.

“It’s not clear either way. Certainly, there’s a level of duplicity involved in our cancellation of that submarine contract. You’ve got two leaders, both of whom have elections next year… It suits [Macron] to run around and say he was blindsided. It’s clear he wasn’t blindsided as he claims to be.”

To her credit The Guardian’s Lenore Taylor immediately smacked Coorey down with a list of the evidence proving Morrison did indeed deceive the French.

“There’s a very strong case on the public record that we were deliberately keeping the French in the dark and that’s what has led to this level of concern and upset on the French side.”

Taylor’s corrective was a rare moment of genuine public service.

Abuse of women in Parliament House

As an exercise, we asked a large group of Facebook users to name those working in the current Parliament – MPs and staff – accused of abusing women. 11 men were named, ten from the Coalition parties and one from Labor. The one Labor MP has in fact had the accusations against him – relating to an alleged incident in 1986 – investigated by the police and found not to be credible. None of the ten Coalition men named has yet been exonerated.

The last Insiders program ran a clip from Scott Morrison on this topic claiming:

Later, Speers referred to an insult by a female Greens Senator aimed at another Senator, immediately apologised for and used this to assert:

“Point is, across the board, you’ve got disgraceful behaviour.”

Yes, all parties breach decorum from time to time. But only one side of federal politics today has an entrenched problem with the abuse of women by men. It is not necessarily “across the board”.

When the allegations of physical and mental abuse by former Education Minister Alan Tudge were raised, the discussion was not about how to get rid of obnoxious MPs for the benefit of Australia, but how to salvage Tudge’s reputation for the benefit of the Coalition.

“People close to him are saying that he has evidence that will quote unquote exonerate him… He [Prime Minister Morrison] didn’t waste any time moving Tudge back onto the back bench.”

When Speers quizzed Treasurer Josh Frydenberg on the abuse of women, he replied, twice: “it’s a multi-party process”.

Former Murdoch journalist Patricia Karvelas, now with the ABC, tried to tar both sides of politics with the same brush on 21 November:

“Labor has been guilty of their own scare campaigns. Remember Mediscare. Just to be fair here. Both sides of politics do that.”

That is false. That was not a scare campaign. Labor warned that the Coalition would cut Medicare if returned to office. That is what happened.

Not according to the latest data from the Bureau of Statistics.

No, we haven’t. Household consumption in the financial year to June was just 1.8% higher than the year before. That is the second lowest annual rise since records began. The worst annual outcome was last year, when consumption fell by 1.4%, the only decline in history.

That is blatantly false, as shown in many analyses.