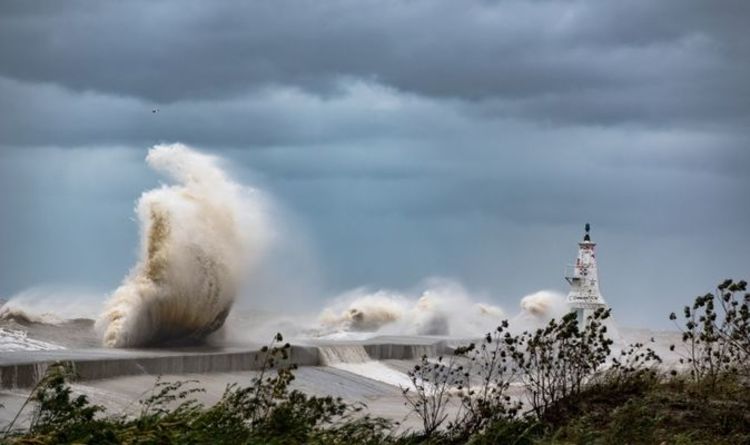 As the weekend ends, a small part of Northern Scotland remains under a yellow warning for strong winds between 9pm on Sunday until noon on Monday. There is a risk of disruption to travel in the area, mainly ferry services.

Alan Reppert, a senior meteorologist at AccuWeather.com, told Express.co.uk: “The wind warning is in effect for northwest Scotland Sunday into Monday as a storm pushes towards the Faroe Islands.

“Most of the strong winds will be Sunday night into early Monday morning.”

Gales could reach 80 to 90 miles per hour in the area.

Mild temperatures from the weekend will continue onto Monday and Tuesday in an unusual warmth for December.

However, temperatures will drop at the end of the week, with a risk of frost and fog in parts of the country.

Mr Reppert added: “By Tuesday, drier weather will move back in, and temperatures will return to seasonable levels with highs in most of England approaching 10C in the south and 8-10C into Scotland.”

Greg Dewhurst, a Senior Operational Meteorologist at the Met Office, told Express.co.uk the colder weather expected at the end of next week is a return to an average December in the UK.

He said: “For the week ahead, it will be mild for much of the UK, although temperatures are falling close to average across the north of the UK at times.

READ MORE: Expert shares advice on what to avoid when clearing frost

However, the Met Office’s long-range forecast is looking less promising for those hoping for a white Christmas.

Its prediction for between December 23 and January 6 states: “Heading into the Christmas period, widespread settled conditions are likely.

“Temperatures perhaps close to or slightly above average for this time of year. However, some colder interludes may bring a risk of frost at times.

“The last week of December and into early January is looking to remain settled, with an increasing chance of frost and fog during clearer spells for Christmas and towards New Year.”