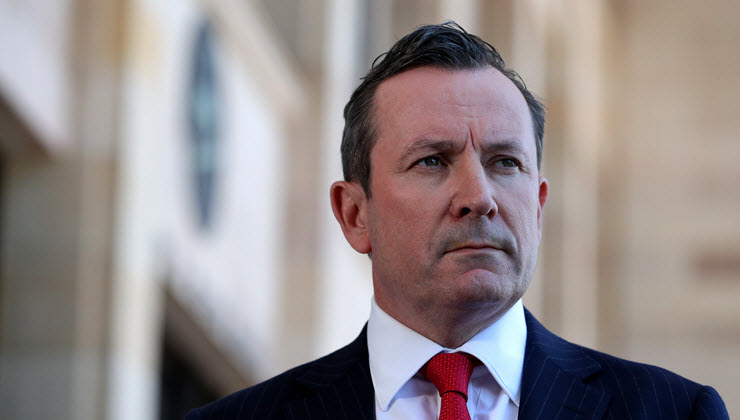 The country’s most closed off state will today announce when it’ll finally open its borders, WA Today reports, after almost two years sealed in. WA Premier Mark McGowan is this morning meeting with his Emergency Management Team to work out the reopening plan, which won’t take place until the 90% vaccination threshold is met, as 7News reports (the state has just reached 80%). Of course, the national roadmap said open when you reach 80%, but The West forecasts WA’s reopening date as “seven or eight weeks away”.

So why wait? Could be a few reasons: WA health modelling showed about 200 fewer people would die, and McGowan has said before he didn’t want venue limits and mask rules in place over Christmas. Also, The West continues, just 43% of the Indigenous population has been double-vaxxed, a dismal figure. New pressures to get vaccinated are popping up nearly weekly, however — WA’s AMA confirmed unvaccinated people are “not a priority” on their organ transplant list, The West ($) reports. Yikes. Yesterday Western Australians would’ve seen a new government push for getting a third jab — interestingly, the booster ad included Perth captain Ashton Turner, even though WA’s summer of cricket was ruined by the government’s border stance, as Yahoo reported.

It comes as Queensland threw open their doors this morning, The Australian ($) reports, ending a five-month lockout of people in NSW and Victoria. Up to 50,000 cars and trucks are expected to cross over into the state in the next 24 hours. Even though the date was set in stone for some time, the government released their border passes online just hours before the reopening, in fear of a system crash. The sunshine state’s top cop said IT staff are on standby but warned the process would be “clunky”.

ANOTHER ROUND OF SHOTS!

The government has reduced the wait time for getting your COVID vaccine booster to five months, from the previous wait time of six months, the SMH reports. It means by the last day of the year, around four times as many people will be ready for their booster. ATAGI chair Brendan Murphy also said it had approved the Moderna booster for people aged 18 and over, as The New Daily says. That means folks can get either Pfizer’s or Moderna’s booster as their third shot — it doesn’t matter which vaccine you had prior to this one.

The shortened timeframe comes as early reports from Britain suggest our vaccine immunity against Omicron is lower than for earlier variant Delta, as The New York Times explains. Indeed last week Pfizer said a third dose of its vaccine increased antibodies against Omicron a staggering 25-fold, compared with two doses, The Wall Street Journal reports. AMA’s boss Omar Khorshid reckons that the third shot will become the norm — he told the SMH that sometime soon, people may not be considered “fully vaccinated” unless they have received that third jab just like in Israel, where a third dose was mandated in October.

GREEN IS THE COLOUR

Climate change action and jobs have topped the list of federal election hopes from Australia’s most powerful private sector leaders, the AFR reports. Up to a third of the 60 chief executives driving Australia’s business called for stronger climate plans — urging policy that will turn us into a global clean-energy superpower, pivot us towards electric vehicles, and see more carbon capture and storage for heavy industry. Among them, leaders from Carsales, Seven West Media, IAG, Mirvac, and Macquarie Group. It comes as the NBN Co became the latest behemoth to go green, The New Daily reports, with plans to use 100% renewable electricity by 2025. More than 8.3 million homes and businesses are connected to the NBN network.

Meanwhile, for the first time ever, a publicly available online tool will collate Indigenous knowledge and western science to help conservation efforts, The Advocate reports. The Noongar Boodjar plant and animal encyclopaedia collates ancestral ecological and cultural knowledge about plants and animals in Noongar Nation, with a hope that it will preserve Indigenous language in the area.

Travel writer Geraldine DeRuiter was preparing for a dreamy evening — a dinner with friends at a Michelin-starred restaurant in Italy. Upon their arrival, DeRuiter tried not to dwell on the dining room, which she described rather specifically as the sort of place where “where one would expect to be interrogated for the disappearance of an ambassador’s child”. The group were in for a staggering 27-course meal they would never, ever forget, but not in the way you’d hope after dining at a posh restaurant.

Among the courses was a plaster of the chef’s own mouth, filled with orange foam and served without cutlery, so they had to use their own mouth to eat it. They were also served slivers of edible paper, shots of vinegar, swirls of sauce injected with “meat droplets” by the waiter, a dish called “frozen air” and another called “rancid ricotta balls”. When DeRuiter kindly suggested to the waiter in Italian that they may have meant “aged” or “fermented” instead, she was sternly told in Italian, “No. Rancid”.

It gets better folks. The review, which went viral, sparked a three-page reply from the chef. “Chef Floriano would like to answer as follows, starting from a drawing,” it read, followed by a sketch of a man on a horse. “Preparing food that is liked is like a making a drawing of a man on a horse,” it continued. “It is not that hard, but most people will admire you”. DeRuiter loved his response, saying it showed a good point about the nature of art. But it was supposed to be dinner!

Hope you have a good laugh today, folks.

The reaction to the [AUKUS deal] by China … I think, was irrational … It’s an uncertain time and we need to make sure that we’re bringing like-minded countries together, friends, and those that share our values and our outlook.

The defence minister was responding to China’s government calling AUKUS a “geopolitical gaming tool”, though several people including Labor’s Penny Wong, former prime minister Paul Keating, and China’s acting ambassador to Australia Wang Xining have all accused Dutton of being the one creating the uncertainty he says is requiring us to bandy together with, erm, “likeminded friends”. Indeed Wang said the “Anglo-Saxon clique” of AUKUS simply showed “certain people in your country still have a mentality of concentric stratification of people according to their cultural and ethnic background”.

“In truth, Kerr’s decision looked very much like it was not so much provoked by the present circumstances but inspired by symbolism: the symbolism of this entitled male, and the symbolism of her iconic, female response.

“The positive audience reaction, I suspect, falls into two camps: one is applauding Kerr for doing precisely what the archetype of a no-nonsense Aussie would; the other is cheering her as a feminist warrior declaring ‘Enough!’ by body rather than words.”

‘A rare example of political courage’, backed by half a million Australians

“Murdoch’s cut-throat lobbying tactics can be intimidating. But thoughtful politicians should think carefully before siding with Andrew Bragg and Murdoch against their own colleagues and rank-and-file supporters who are now powering this movement.

“The best way that Australians can achieve a royal commission is to continue to let the political class know that, if politicians have the courage to speak out, the Australian people will have their back. I’ve launched a community organisation, Australians for a Murdoch Royal Commission, to do just that and I’m delighted to have hired Sally Rugg as national director.”

“Applying the same ingenuity by which earlier generations silted our rivers, dispersed our topsoil and annihilated our fauna, a generation of right-wing politicians and activists — working as a team with vice-chancellors, managers, consultants and compliant underlings — are hacking away at the trunk and roots of a system we built up only in the past half-century or so.

“The most pertinent example at the moment is Sydney University, whose century-and-three-quarters arts faculty is being more or less demolished as a centre of scholarship, learning, and the transmission of the humanities.”

Kentucky tornadoes: up to 100 feared dead in historic US storms (The Guardian)

A slow-burning quake is unfolding beneath Kāpiti (NZ Herald)

Stop kidding: the 2024 tax cut will be economically irresponsible — Ross Gittins (The Age): “There’s a simple and obvious way both sides could, with one stroke, significantly improve prospective budget balances, and because it would be front-end loaded, disproportionately reduce our prospective public debt over years and decades to come. There’s no way such a heavily indebted government should go ahead with the already-legislated third stage of tax cuts from July 2024, with a cost of more than $16 billion a year …

“But the tax cut both sides support is now also “unfunded”. We’ll be borrowing money to give ourselves a tax cut. That’s economically responsible? … The budget office has found that about two-thirds of the money will go to the top 10% of taxpayers, on $150,000 or more. Only a third will go to women. So, the lion’s share will go to those most likely to save it rather than spend it. Higher saving is the last thing we need.”

Boris Johnson’s crises boil down to one thing: contempt for the rest of us — John Harris (The Guardian): This kind of contempt is there in Johnson’s serial untruths: lying, after all, often implies disdain for whoever the liar thinks can be misled. It is part of his strident ambition, and apparent habit of contemptuously using people and causes for his own ends. His Peppa Pig speech at the CBI was a case study in contempt for an audience. It is impossible, moreover, to separate this behavioural contempt from the disregard Johnson shows for conventions and institutions, because they ultimately boil down to the same thing, captured in the cliche of rules being for the little people …

“If politics and power were the right way up, those at the top would at least do an impression of being serious and consistent in order to rein in any irresponsible parts of the population. But in England, we seem to have ended up with the exact opposite: a dutiful public boggling at a clique at the top who are, to coin a currently ubiquitous phrase, ‘taking us for fools’: shallow, reckless, and apparently contemptuous of the sacrifices people are still making, which will soon enter their third year.”