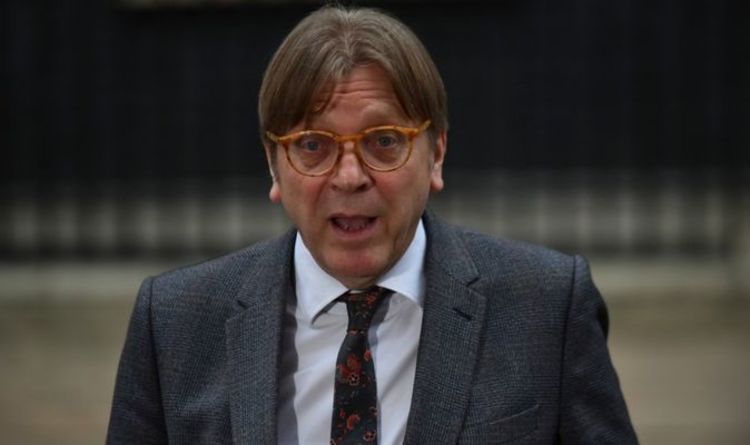 Guy Verhofstadt, 68, has been berated by Brexiteers after he accused Eurosceptic campaigners of lying about the single market. Writing on Twitter, Mr Verhofstadt said: “The Brexiteers lied.

“The reality check: Trading is much harder outside of the single market!”

Mr Verhofstadt, who was Prime Minister of Belgium from 1999 until 2008, accompanied his post with an image indicating UK trade flows have lagged behind the EU’s main countries since 2006 and have continued to do so since Britain left the Brussels bloc in 2016.

However, not everyone welcomed the comments made by the ex-chair of the European Parliament’s Brexit Steering Group.

“GDP and jobs are what counts.

“A country could not do trade and still be the greatest wealth creator.

“Trade is only necessary for efficiency and resources.”

Imports to Brexit Britain from the Brussels bloc also fell during the same period by 19 percent.

However, the proportion of EU imports to Britain and UK exports to the bloc has also decreased in recent years.

During the 2016 referendum, the official pro-Brexit campaign group Vote Leave said they wanted to take back control of the UK’s trade and economy by pursuing free trade deals around the world.

Speaking about the economic benefits of Brexit, Vote Leave said: “We have no power to make free trade deals with fast growing economies like India and China – or even key allies like Australia and New Zealand.”

Since the UK severed ties with the EU’s single market and customs union, Brexit Britain has signed bespoke trade agreements with both of its Antipodean allies and even Japan.

The UK added the “world’s most comprehensive” digital trade deal with Singapore to its growing list last week.

Following the announcement of the UK-Singapore deal, International Trade Secretary and former European Research Group member Anne-Marie Trevelyan, 52, said: “We’re using our independent trade policy to strike ground-breaking agreements that update these rules for the digital age and connect UK businesses to the biggest and fastest growing markets in the world.”