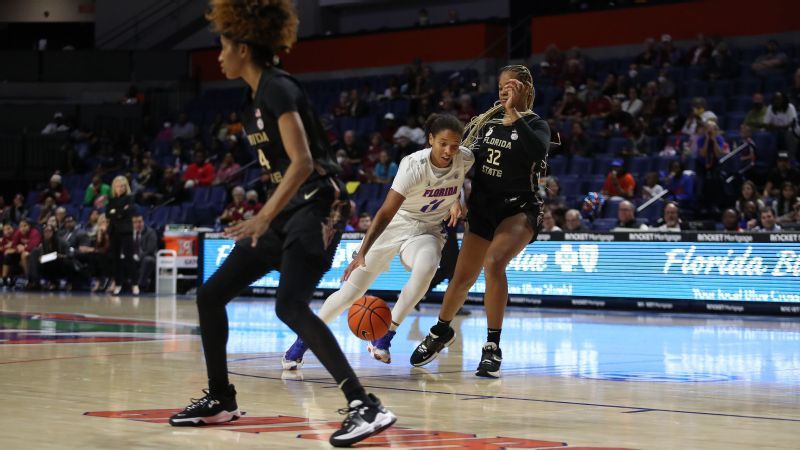 GAINESVILLE, Fla. – A Seminole state no more. Florida women’s basketball put down the defensive clamps in a dominant victory over Florida State on Sunday, 69-55, to snap a five-game losing skid to Seminoles dating back to 2015.

The Gators (9-3, 0-0 SEC) made life on the visiting Seminoles (6-3, 0-0 ACC) exceedingly difficult thanks to lock-down defense throughout the game. Florida forced their in-state rival, who was receiving votes in both polls, into 23 turnovers that resulted in 10 steals and an 18-5 advantage in points off of turnovers.

Senior Emanuely de Oliveira led the Gators (9-3, 0-0 SEC) with a career-best 16 points to pace Florida’s offensive effort on Sunday. Floor general, Kiara Smith, added 11 points while Zippy Broughton also contributed 11 off of the bench. Thirteen of the made 25 shots were assisted, led by Lavender Briggs with four, as UF also took care of the ball, ending with a season-low seven turnovers.

On the glass, both teams were near even as FSU out-rebounded the Gators, 44-43. Florida, however, pulled down 18 offensive rebounds to give the home squad a 17-6 edge in second chance points. Nina Rickards brought down eight boards for Florida while de Oliveira and Floor Toonders each grabbed six.

Early on it looked like Sunday’s contest was going to be a slugfest, with both teams trading blows until Florida State took a 9-8 lead into the first media timeout. After regaining the lead at 13-11, Florida would use a Broughton triple and Rimdal and-one to take six-straight points and give the Gators breathing room at 19-11 after one.

Broughton brought the defensive pressure right away to start the second frame, intercepting a bad pass from Sara Bejedi near midcourt to push the Gator lead to 10 following the layup. The Seminoles would close the gap to seven twice, but a powerful move on the inside by Taliyah Wyche, followed by a quick 6-0 spurt from UF would give Florida a 31-19 advantage with 3:50 remaining.

The Seminoles would again trim the lead down to 10, but Broughton and Smith would push the tempo and put together a 5-0 run of their own, giving the Orange & Blue their biggest lead of the first half at 38-23 with 23 seconds remaining. A free throw by FSU with two seconds on the clock would solidify a 38-24 halftime lead for the Gators.

Florida State was scoreless from behind the arc in the second quarter, thanks to smothering defensive pressure from Florida who forced six turnovers in the period. On the other side of the floor, UF converted eight of its 17 shots, including all three free throws.

Continuing with a theme of the season, the Gators were dominant in the third quarter. It didn’t take long for Florida open the flood gates, starting the frame on a 9-0 run, capped off by a jumper from de Oliveira at 6:34 to extend the UF lead to 47-24.

The lead would hover around 20 points for much of the quarter until de Oliveira would connect on triple with 55 seconds left to spark a 6-0 run to end the frame. The Gators managed outscore the opposition 22-11 in the third quarter to take a 60-35 lead into the fourth.

Florida’s lead would peak at 62-35 following a Toonders layup off of a dime from Smith, and then again at 66-39 with 7:21 on the clock thanks to a jumper from Broughton. The Seminoles would put together a nine-point flurry to pull back within 18, but the push was too late, with the Gators holding on for a 69-55 victory.

After a nine-day hiatus from competition, Florida women’s basketball will be back in action on Tuesday, Dec. 21 when Murray State visits Exactech Arena at the Stephen C. O’Connell Center for a 1 p.m. ET tip.

…On the game as a whole “That was a fun Sunday afternoon. It’s always good when you can beat the Seminoles, and I’m just really proud of our team’s efforts, but really more inspired by our student athletes. You know, I don’t have kids myself, but if I did, I’d want them to grow up to be like these young women. They are fun, they are competitors. I think that was on full display today, so we’re very proud of them and our program as a whole.”

…On overcoming offensive struggles “I’d say a lot more went right than didn’t. When you say we got out-rebounded, we got out rebounded by one, 44-43, and we had 18 offensive rebounds. That was something we were really focused on. We thought we had an advantage there with our athleticism and our speed and I think that proved to be true today. I was really proud of our efforts on the glass and I think you just saw our depth today. A team that wants to grow, has a desire to win, but a desire to improve every time we step on that court. No, Lav didn’t shoot the ball as I think she would have hoped, but she does so much more for us on the court. Her composure, her leadership, and her steadiness all give us confidence.”

…On Kiara Smith “Kiki is a floor general. We think she’s a pro. She plays both ends of the floor. She contributes offensively, she takes care of the basketball, she had four steals tonight. I go out on a whim, we think she is one of the best on ball defenders in the conference and we expect her to be up for defensive player of the year this year. She prides herself on playing both ends of the floor.”

…On Emanuely de Oliveira’s career-best performance “She’s the president of the charge club, though, she doesn’t really take them in practice, we wouldn’t want her to. Manu made some big time plays for us today and that’s something that she’s consistently done for us. She just has a steadiness and composure to her game and her basketball IQ is very high. We thought that that would be a mismatch and that four position both her and Jordan could expose, and it was nice to see them have some success tonight on the offensive end.”

…On the bench play “I think they helped a lot. I think every game is different for every player, but even thought I think they did a good job coming off the bench and helping. Berte (Alberte Rimdal) with the three, and Leah (Taliyah Wyche) especially with getting the rebounds and playing size.”

…On her on-court relationship with Briggs “Honestly, I can’t exactly say, it’s just me and Lavender have been playing together since her sophomore year, didn’t play with her last year, but I think we do a great job just looking at each other and connecting. So, when she dove at the ball, to get that ball, I knew she would get it and pass it if needed.”

…On taking charges “It wasn’t a big thing for me, it became a big thing when I came to college. I saw that especially when I drove the ball, that people were taking charges and it is a thing that we work on a lot as a team. We even talked before the game that we had to take charges in these games, so I think that everyone is willing to step up and take the charge.”

– Sunday’s victory snapped a five-game losing skid to the Seminoles dating back to 2015.

– Florida’s defensive pressure led to a season-high 23 turnovers for the Seminoles.

– The Gators’ seven turnovers were the lowest in an outing this season.

– De Oliveira’s 16 points mark a career-best for the senior.

– After an 11-point outing, Smith is just two points away from passing Haley Lorenzen for 21st all-time in school history as she boasts 1,213 points.

– With four steals, Smith moved into 12th in school history with 179 career steals.