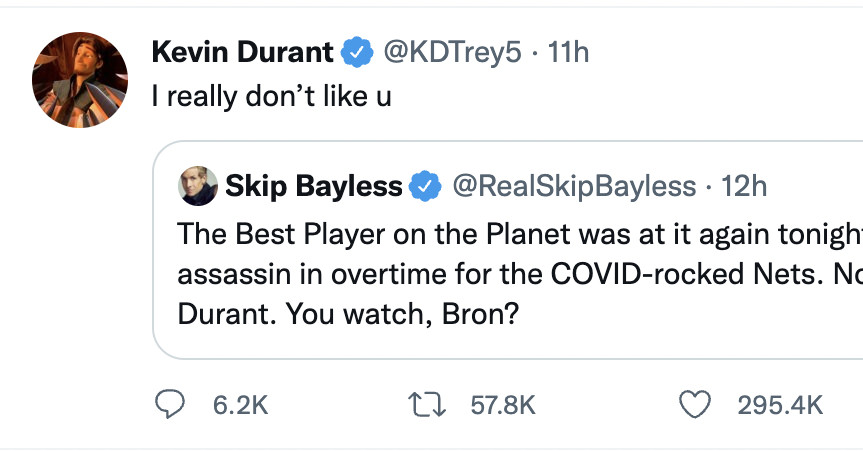 Skip Bayless made his name in sports media by pioneering the ‘hot take’ as a newspaper columnist in the ‘80s and ‘90s. In those days, people just called it a bad opinion. Bayless eventually made his way onto television, and he was hired full-time by ESPN in 2004 to captain shows like “Cold Pizza” and “1st and 10” that were meant to, let’s say, embrace debate.

Bayless often gravitated to contrarian viewpoints to get a rise out of the people he debated and the viewers at home. He quickly realized there was one young professional athlete he could constantly criticize to get the biggest reaction possible: LeBron James.

Bayless’ shots at LeBron only got more and more ridiculous as James’ list of accomplishments grew. When James powered the Cleveland Cavaliers upset of the 73-win Warriors in the 2016 NBA Finals, Bayless tweeted that LeBron will never sniff Michael Jordan’s legacy. When LeBron showed up to watch his son Bronny’s high school game and jumped in the warmup line with the team, Bayless yelped that James upstaged a bunch of teenagers because he’s starved for attention.

Bayless’ constant criticism of LeBron is lazy and cheap. He does it because he knows people will react to it and to him. He’ll use almost any excuse to take a shot at LeBron regardless fo the context.

Case in point: After Kevin Durant played 51 minutes to lead the Brooklyn Nets to a win over the Toronto Raptors on Tuesday night with a Covid-depleted roster that featured only eight players, Bayless tweeted that KD was the best player in the world and took another jab at James.

Kevin Durant saw it and responded with one of his best dunks of the year.

Durant’s tweet has 58K retweets so far. I guess the public feels the same way about Bayless that Bayless feels about LeBron.

Durant and LeBron are two of the three best players of their generation along with Stephen Curry. LeBron is in Year 18. Durant is in Year 14, which feels surprising. The point is: both of these guys have been in the NBA together for a long time while competing at a historic level. They’ve won gold medals together. They’ve gone at each other in the NBA Finals three different times.

KD and Bron sure seem to have the ultimate respect for each other. While both still want to be called the ‘best player in the world’ — in true Bayless fashion, I’ll say the order goes Giannis, Jokic, Curry, and KD right now — their bond surpasses what some TV guy thinks on the topic.

Skip Bayless is going to keep hating on LeBron, you can count on that. Good for KD for calling him out.