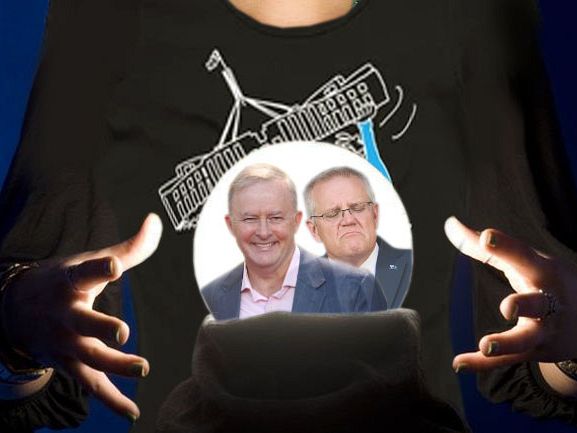 IN A YEAR characterised by lies and rorts and with the pandemic creating a surreal backdrop for fear among the populace, the levels of corruption have hit lows few could have predicted.

Rorts and pork barrelling are now par for the course, rising in frequency with each breaking day, as we have consistently shown and frequently foretold at IA.

With a due sense of apprehension given the cataclysmic years under Morrison rule, what does 2022 have in store? Will this seemingly endless status quo continue? Is political corruption so normalised and voters so conditioned that the Morrison Government could be returned, ready and emboldened to continue on its merry rorting way?

We have channelled our inner clairvoyant to present the following prophecies, as seen by the Sage of Surfers Paradise, for the first six months of 2022.

But be forewarned! Should any or all of these uncannily eventuate or should they not come to pass as foretold, the Sage of Surfers Paradise’s word is final, we accept no liability and no correspondence will be entered into. (These prognostications are for entertainment purposes only.)

On Invasion Day, there will be Government-led celebrations of Captain Cook’s circumnavigation of the continent and founding of the colony in Bondi — protests in the streets by people with other views notwithstanding.

On January 22 (or possibly a little earlier), the Communications Minister will threaten to revoke Triple J’s licence for conducting its Hottest 100 countdown on this day, instead of on Invasion Day, when all self-respecting white supremacists would have done it. The Murdoch media will concur.

Conservative forces will call for the privatisation of the ABC.

Scott Morrison will enact strengthened safeguards for Liberal Party leaders, ensuring he cannot be toppled without one hundred and one per cent of the party room vote.

Jenny will do a photoshoot for No Idea Magazine.

Attorney-General Michaelia Cash may or may not follow in the footsteps of her predecessor with historical rape allegations — the Surfers Sage isn’t prepared to rule this in or out.

She’s already been grilled by her colleagues, but now a Federal Court Judge wants a piece of Jobs Minister Michaelia Cash over a leak that made raids on the Worker’s Union offices public. @CUhlmann #AusPol #9News pic.twitter.com/rE1NLsRcJA

Cash will, however, definitely declare unprecedented union corruption, for which a new royal commission will need to be established, post haste.

Later in the month, it is certain, our national security will be under threat and the AFP will embark on a massive terrorist offensive, during which several usual suspects will be rounded up and locked away under current anti-terrorism legislation. Without the possibility of parole. Via a closed hearing. (All of these people will later be quietly released.)

Corruption allegations will surface against one or all of the following: Anthony Albanese, Sally McManus, Penny Wong and/or Jim Chalmers. Possibly also Tanya Plibersec.

A sudden and seemingly inexplicable exodus from Parliament will erupt among Coalition members, with resignations all citing a sudden need to spend more time with family. The opinions of the respective families will remain unclear.

There will be several new appointments to the boards of the ABC, the Australian Energy Market Commission, National COVID-19 Coordination Commission, Administrative Appeals Tribunal, the ACCC and a range of other quangos.

In response to countless editorials in The Australian and strong criticism from the IPA as reported on Q&A and The Drum, the Government will announce a tender for the sale of 51 per cent of the Australian Broadcasting Commission.

Christian Porter will be appointed as Managing Director of the ABC.

It appears Louise Milligan’s employment is to be terminated and she will be sent into exile on Christmas Island.

The date for a May Federal Election will be announced alongside renewed grave fears for our national security.

Four Corners will be ceremoniously axed.

The new presenter of ABC7.30 will be Peta Credlin.

Clive Palmer and UAP Leader Craig Kelly will set forth to establish a new world record for the most unsolicited text messages ever sent, and in the shortest amount of time to date.

The Prime Minister will be photographed at a mine, wearing a fluoro vest, while cooking Chicken Vindaloo.

Major expenditure announcements will be made for all Coalition electorates plus every swinging seat and/or dick.

The Prime Minister will be photographed making samosas, building a sandpit for his daughters – aged 11 and 13 – and holding someone’s smiling baby … Wait, the Sage has reversed that picture — no baby cradled by ScoMo is ever gonna be smiling.

Jenny will do a centrefold for Pentecostal Vogue Magazine, entitled ‘The Love Machine Unveils’.

Peter Dutton will order his wife to do an exclusive tell-all interview and photoshoot for The Australian, categorically declaring her spouse is “not a monster” while her husband leers malevolently at the camera.

The Sage portends that, despite only consisting of 31 days, the month of May 2022 will be the longest month since the universe emerged from the dim dark embers of nothingness and time began.

After a long and protracted vote-counting process, during which several frauds are discovered and votes recounted, the Morrison Government will be voted out.

Many citizens will hit the streets to rejoice but footage of celebrations will not appear on any of the commercial news broadcasts or the newly privatised national broadcaster.

A tearful IPA coterie will stage a demonstration in Melbourne against Dictator Dan and Chairman Albanese. Very few people will be in attendance but scores of thousands of protesters will be reported in the Murdoch media, including the (majority Murdoch-owned) ABC.

All but seven remaining members of the Opposition will be called before this newly formed body on corruption charges.

The Murdoch media will blame Labor for the eye-watering national debt and deficit of the previous three years.

The Right-wing nutjobs will instantly mobilise to axe the carbon tax, despite the absence of a policy announcement or even a hint of such.

There will be a Liberal Party leadership spill during which Scott Morrison will be toppled with one hundred and one per cent of the vote.

An inexplicable stroke of lightning will hit the IPA head office in Melbourne, shattering the desks of John Roskam and Janet Albrechtsen.

There will be much wailing and gnashing of teeth at Pentecostal churches around Australia, as they prognosticate that, indeed, the End Times are upon us.

The crystal is murky on this point but it appears Josh Frydenberg’s face emerges as Leader of the Opposition … although the Sage adds, there are dim shadows of what look to be malicious potatoes hovering in the background.

“After the next federal election Annastacia Palaszczuk will be the premier of Queensland.” Scott Morrison explains federal elections. “If you don’t vote for the liberal national parties then Anthony Albanese will be the prime minister of Australia & not myself.” #auspol #qldpol pic.twitter.com/25tclaVBlM

This editorial was originally published as part of the weekly subscriber-only newsletter and may be read online in the IA members-only area. You can receive this weekly in your inbox by subscribing HERE.