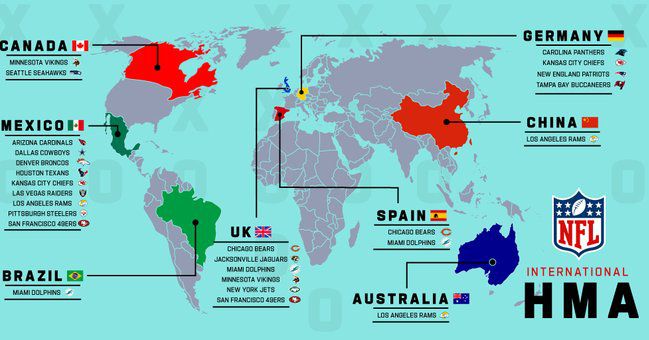 My favorite thing about NFL games in London is the cornucopia of random jerseys in the crowd. Heck, it can be a nonsense game between the Falcons and Jaguars and you’ll still see merch from all 32 teams in the stands, turning the crowd into a rainbow mess of madness. I love it.

Now the NFL wants to change all that, giving guidelines to every major-market on who they should root for in the NFL.

Some of these kind of make sense. I mean, Seattle is close to Vancouver and Minnesota borders Ontario, so Canada is more or less settled. It’s some of these other teams that just really don’t make sense.

At first it appears like they’re just mapping to geographic proximity, hence China and Australia being default fans of the Rams — but then it goes off the rails. What does Miami and Chicago have to do with Spain? Why is Germany supposed to support two teams from NFC South? I love how Mexico are supposed to support the Rams and 49ers, because California — but nobody on earth is supposed to pull for the Chargers.

It’s because nobody ever remembers the Chargers, not even the NFL.

I understand this is simply a marketing guideline for the league, but it’s also really weird. Only 19 teams are on the league’s list. Essentially the NFL is saying that the Colts, Giants, Falcons, Saints, Packers, Washington, Philadelphia, Cowboys, Bills, Ravens, Browns, Bengals and Lions have absolutely no marketability or value outside of the United States. I mean, that might make sense for the Lions and Browns, but why the heck are Philly and Dallas being left in the cold while Carolina gets to be “Germany’s Team?”

This has to be one of the most confusing things the NFL has put out in a while.