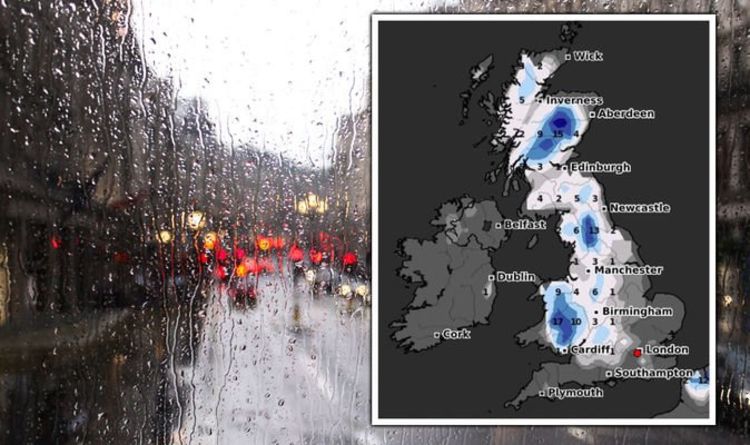 According to graphs from forecasters, a swirling Atlantic front is expected to hit the UK on New Year’s Eve. Such is the heavy weather front, rain is expected to fall between 5-10mm an hour on December, 31. The worst of the weather front will be confined to the north of England and Scotland.

According to graphs from WXCharts, Newcastle and Carlisle will see over 5mm of rain an hour on New Year’s Eve.

The entirety of Scotland will see the worst of the rain with graphs showing rainfall between 2-5mm an hour for most of the country.

While the rain will be located in the north of England and Scotland, forecasters have warned of the chance of snow across the UK.

Graphs show parts of Wales recording up to 18cm of snow on New year’s Day.

Parts of northern England may see 13cm, while the Highlands may see up to 15cm on January 1.

Commenting on the forecast between December 31 to January 14, the early part of the period may see longer spells of snow, the Met Office reported.

The Met Office said: “Any unsettled spells are most likely for the northwest, with occasional stronger winds, and some showers or longer spells of rain and potential for areas of snow.”

Temperature graphs show the mercury falling to below freezing for many parts of the country on January 1.

The south of England is expected to experience temperatures close to -2C on December, 31.

The Midlands will range between -2 to -4C on December 31, while high areas in the north of England may even fall to -8C.

In Scotland, the mercury is expected to range between -3 and -5C in Scotland due to the Atlantic front.

For the period between December 21-30, the Met Office adds: “The start of this period is looking to be settled and predominantly dry with large amounts of cloud. Isolated mist and fog patches developing in clearer areas.

“In general, cloud amounts will tend to reduce with time, with a corresponding increase in the risk of overnight fog and frost, which may be slow to clear by day in some areas.

“Towards the middle of the period, there is an increasing chance of more unsettled and windier weather affecting the UK, with rain, and perhaps snow, possible for some places.

“Temperatures will generally be near to below normal, perhaps rather cold in the south, feeling chilly where any fog persists, and locally mild in the north and northwest.”