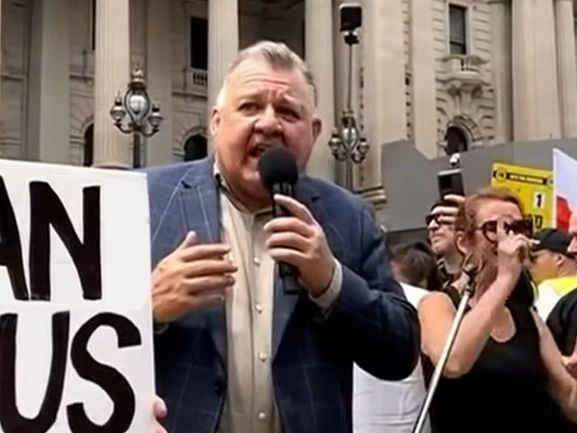 Members of the anti-vax movement have been showing support for the United Australia Party, two factions that share similar characteristics, writes Tom Tanuki.

I’VE BEEN DRIVING down the coast and seeing a particular United Australia Party (UAP) billboard again and again. It’s plastered over targeted rural highway stretches all the way from Queensland to Victoria.

On it is written:

The ‘S’ in the first ‘sold out’ is awkwardly half-surrounded by a Southern Cross. You have to squint to make it out as you’re driving. Why is it there? Ambient patriot chic? Is it so you squint at the thing to make sure you read all the meaningless words? It feels like a trick you’d pay a boutique meme agency lots of money for.

Also, why is the ‘again’ capitalised? You’d think it’s just some idiot UAP staffer creating bad billboard text, but maybe you’re not thinking cynically enough. These con artists are boomer-signalling, so they could be quite deliberately writing in the way that Facebook-boomers write. You can pay boutique meme agencies big money for this kind of ingenuity.

The billboard is aesthetics-mining some vague “rural-Aussie-mad-at-politicians” patois. I think you’re meant to imagine one of our Aussie farmers, wiping sweat from under his Akubra and staring out over his drought-stricken basin. You picture him growling, “They’ve sold us up the bloody river, mate.” That kind of schtick. Fresh off a McCain frozen pea ad.

Sold what, though? Who’s sold out who? Sold out what to whom? Where? What? It’s just a vibe, really. They’re pedalling Ambient Whinging Farmer vibes at the UAP, mainlining them into your soft brains.

The internet has always been the domain of the scammer but the biggest scams involve electoral politics now, not iTunes gift cards. Boutique meme-making agencies were able to game big tech to convince boomers to vote for the utterly charmless Prime Minister Scott Morrison last election, so clearly they can do anything.

Apparently they did that by injecting many colour-coded items of memetic propaganda (Blue man good! Red man bad! Vote blue man!) into your pay-for-play Facebook timeline. So who am I to question this idiotic billboard? It’ll probably secure UAP a few seats.

I’m not sure if UAP cares about anything that happens after an election. Consider the many ex-Palmer Party MPs who have fled from his team. Defector Francis Xavier Kurrupuwu cited his reasons in 2014: Clive Palmer had created no party structure, allocated no resources and staff to any of his MPs and had provided him with absolutely no contact or assistance.

Several MPs were similarly stranded — they eventually became independent or, like Kurrupuwu, rejoined the parties they’d been enticed away from.

Palmer’s political game appeared to be chiefly about tilting electoral results for… something. He obviously had some mind in end, which benefited someone. (I couldn’t begin to guess who a craven mining magnate might want to please by interfering in elections.)

Clive spent $60 million on the last Federal Election. It didn’t net him many seats but it may be that UAP seats weren’t his chief intention anyway. Human rights groups said there needed to be caps on election spending, chiefly because Palmer’s efforts were so profoundly suss. He was charged with fraud and corporate misconduct last year for earlier political efforts.

It doesn’t feel like pursuing your best interests as a constituent ranks chiefly among UAP’s priorities.

The UAP is now in its element because it has married up with the anti-vax, COVID-denialist movement. A minor Party that trades in patronising farmer jingoism and hidden agendas has a lot in common with the “freedom” movement. And they all love a good stunt.  Match made in heaven! Finally, these conspiracist plebs are good for something better than donating to some liar’s scam fundraiser.

Now they can do their job and vote for MP Craig Kelly and maybe give him a nice office for a while. Or maybe it’ll just give Clive… um… whatever he wants. (Again: I, a mere pleb, could not begin to guess what the big oligarch mining guy wants.)

For the movement’s veteran influencers, Christmas has arrived. Who needs to start a new GoFundMe when you can court the affections of a bloke who might be ready to blow $60 million on your vanity project?

Morgan C Jonas has stood up as a UAP candidate. He first popped up on my radar supporting an Avi Yemini rally in 2018. (It was a rally outside Facebook HQ because Avi lost his Facebook page. Really important activist work.) Since then, Morgan went on to hold rallies over the Belt and Road Initiative and, now, over COVID-denialist and anti-lockdown matters via Reignite Democracy Australia (which he runs with his partner Monica Smit). If the issue tilts right, Morgan’s there to make gravy out of it. He’s a great UAP fit.

So is Simeon Boikov — who is supporting UAP while not running as a candidate. He’s a YouTuber known as “Aussie Cossack”. He poses as a kind of a wannabe Russian operative. He’s not an actual leader of a formal international Cossack organisation, having actually been excommunicated from that role because the Russians thought he was a show-pony. But he’s cosied up with Australian fascists locally, and Russian ultranationalist soldiers abroad — like Igor Strelkov, who has been accused of downing flight MH17.

Gosh, I bet ASIO would be delighted to have this guy supporting a political party’s campaign while role-playing as a hectic Russian spy — albeit one who looks like the massive baby from Spirited Away.

Boikov says a lot of edgy stuff. Boikov once called Australia an “enemy state”. Boikov also said the other day that the Australian people would get rope for Victorian Premier Daniel Andrews and celebrate on Eureka Hill, possibly referencing the “day of the rope” narrative from notorious neo-Nazi novel The Turner Diaries. I guess saying this stuff is good for reach.

So he’s perfect for UAP.

Romeo Georges is a COVID denialist influencer from Sydney. (A Lebanese mate tells me he’s like your uncle who’s hilarious but says lots of dumb shit. In real life, your aunty would tell him to shut up and pull his head in, but in the pandemic we’re all alone frying on the internet so instead Romeo gets to be a minor e-celeb for it.)

Recently, Romeo said that the Aussie Cossack offered $20,000 just so that he could headline a Sydney “freedom” rally. When he didn’t get his way, he started threatening the organisers.

Seems like there’s big money in the COVID denialist scene now, then.

Aussie Cossack now occupies a leading influencer space in the movement alongside Craig Kelly, who looks like Bebop from the Teenage Mutant Ninja Turtles got a job in real estate.

They both use their positions to plug UAP.

Simeon was charging $500 per ticket for a planned “Freedom Ball”, which happened on Thursday. First it was cancelled and then relocated last-minute to a new venue. The game was to assemble all the conspiracist influencers together at one flashy event and bring them together with the L-NP, lobbyists and, of course, the UAP. No influencer would dare resist the offer. Imagine the potential Palmer bucks on offer!

But this was not an event for the plebs of the movement. Lesser livestreamers were kicked out, perhaps so they couldn’t record unapproved footage — Boikov reportedly demanded that NSW Police issue a move-on order to one. (The police complied with his demands.) Lesser influencers were also ejected from inside. This was an event to cultivate real political power among anointed COVID-denialists.

And I’ve seen a little resistance to this marked shift in gears. Some people don’t like the hard political tilt their movement has taken.

But they’re just plebs and they’re not rich like Palmer is, so who cares what they think? So say the influencers, I suppose.

Mostly though, the plebs have accepted it. It’s in the DNA of their movement — they’ve long been accustomed to getting led up the garden path by someone. In fact, they’ve spent nearly two years being tricked.

They’ve handed over money by the millions to useless fundraisers. They’ve let bottom-of-the-barrel fascist elements populate not just the ground but even leadership roles at their rallies and usually refused to consider the consequences of that. They’ve been gamed, repeatedly, by a rotating cast of con artists.

And I’ve written about them in Independent Australia for all of 2021, expressing my view that their movement is fundamentally conspiracist, spectacle-driven and ideologically malleable and it’s this DNA that makes them so easy to trick.

As an activist, I have admired their chaotic, leaderless nature sometimes. If only we could get people to turn out week and again in droves. If only we could howl atop the West Gate like idiots, for climate, or for Indigenous rights, or for anti-fascism. This ridiculous, bizarre, multi-factional, misunderstood, regularly self-defeating and sometimes terrifying movement should be understood.

But things have devolved rather rapidly of late.  And now, the greatest letdown of the “freedom” movement – not to me but to itself, a great letdown of its own potential – is the eagerness with which it has rolled over for one Clive Palmer.