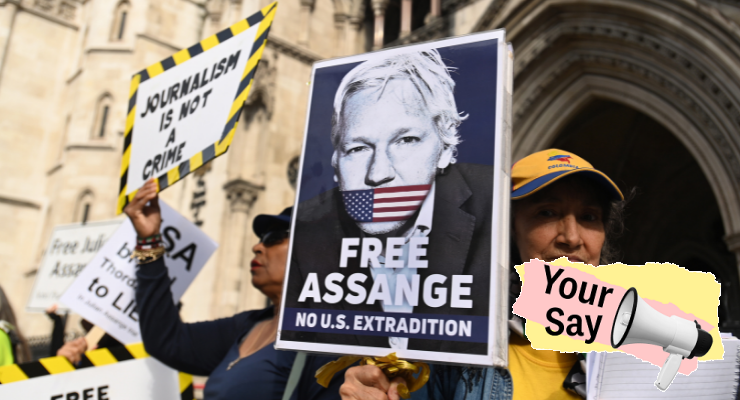 It sounds unanimous — Crikey readers feel that the Australian government needs to intervene on behalf of Julian Assange. Also: on the topic of whistleblowers, readers agree they should be valued rather than penalised.

Sandra Greacen writes: As a Christian I’m thoroughly disgusted at the way this man has been treated, especially by so-called Christian politicians and the governments they lead.  If Julian dies, in my opinion, they are guilty of murder. I’m starting to believe his death would be welcomed by those political leaders.

Too many political leaders have NO scruples, conscience, or compassion, and are absolutely totally lacking in human decency. They lie as a matter of political expediency and to cover their own hides.

So much for our loudly claimed lying conniving “Christian” leadership over the last decade.

Martin Carey writes: Our prime minister should demonstrate his support for press freedom, journalism, justice and democracy, and his unique relationship with the USA and the UK to secure the release of Julian Assange and his return as a free man to Australia.

Julian Assange has been prosecuted and persecuted for the disclosure of embarrassing information about the USA, UK and Australia. He in languishing in jail while his prosecutors prolong the injustice to keep him there to suffer for his embarrassing revelations … Julian Assange has suffered enough and Mr Morrison should negotiate his release.

Carole Hayes writes: I don’t expect the Australian government to do the right thing and defend an Australian whistleblower going on its record of persecution of David McBride, Witnesses K and J, and Bernard Colleary. However I am most disappointed in the attitude of Australian journalists who cannot see that they can and will be targeted unless they stand up for freedom of the press. The press gallery in particular may not like to be associated with Assange, however journalism is a competitive sport. Don’t rely on your fellow reporters if you fall foul of this government. You know for whom the bell tolls.

Deirdre Sparrius writes: I admire whistleblowers. Usually their public disclosures follow months if not years of anguish, examining their own conscience about the consequences of non action. They risk ridicule, financial loss, and it takes years before their stand and actions are vindicated. The case you outline is such a one.

We hear of Defence people who witness atrocities committed and if they stay silent they and others could be unconscionably implicated and have to live with this. We read of the Timor example where a dishonest government has shred the life and reputation of the whistleblowers as well as taking advantage of a supposed ally. The banks, businesses, [and] governments have doggedly covered up disgusting behaviour where innocent people are ruined, hurt or even killed.

It takes courage to be a whistleblower and I believe they should be compensated ~generously~ from a special fund for the effect it has on them. They should also get huge compensatory payments from the  body (government or business) that has fought and benefited from delay or inaction. The amount should reflect the time they resisted action, the damage caused to others, as well as the effect on the whistleblower’s life.

Jane Paterson writes: Of course whistleblowers should be rewarded and definitely not persecuted. It’s sad that we can see where the ACCC fear of being seen to make mistakes drives and corrupts its value system.

Greg Cole writes: The power that the states have and have abused over the past two years is disturbing. Families have been kept apart just because they live in different parts of the country. How un-Australian is that? It is cruel, mean, and a total abuse of power.

The suggestion that Morrison has not led well during the pandemic is a harsh criticism. To my mind he tried to unite Australia and move forward as one, but the childish state premiers could not agree, and as a country we had multiple approaches to the pandemic issue …

There should have been a national approach, and I for one blame the state premiers and their selfish grab for power as the downfall to a truly national approach to dealing with the pandemic.

The states should relinquish some of the power they currently have and transfer this to the Commonwealth in a manner that will assist all Australians to move forward together.

Karen Feehely writes: I have always thought we could do with one less level of government, e.g. regions and national. The states are bound by whitefella lines on a map. If the states could work across borders where it makes sense to do so the management of some regions would be improved.

Go Perrottet! Finally, a professional equal is standing up to ScoMo. This government is useless and dangerous. Let the states go full feral parochial but united against the feds. Folks need to wake up and get rid of this government. The disengaged may notice state politics more than the federal debacle.

Has something in Crikey got you fired up? Let us know by writing to [email protected]. Please include your full name if you would like to be considered for publication. We reserve the right to edit for length and clarity.