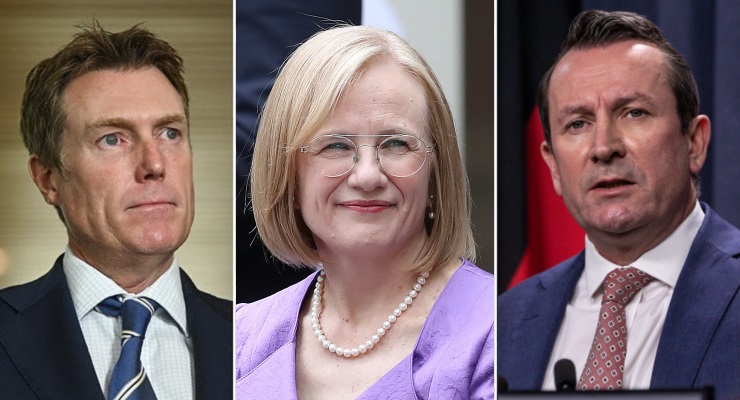 As we described it during this week’s Very Crikey Christmas event, 2021 was a classic dispiriting sequel to 2020. It had all the same basic moves — democracy eroding as surely as a sand dune assailed by rising sea levels, long periods where most of the country was locked in their homes, fracturing social cohesion, protests threatening something potentially terrifying — but with none of the novelty or excitement of the original.

If 2020 was a bin fire, in 2021 the bin rolled over the edge of a cliff, fell into the ocean and bobbed, still smouldering, off towards the horizon.

So as you would expect after a year as royally depressing as 2021, it’s a crowded and competitive field for Crikey‘s 2021 Arsehat of the Year Award — the year was lousy with the lousy, a fish rotting from the head, with relentless corruption, dishonesty and incompetence at state and federal level setting the tone.

But such times have a happy talent for producing the opposite, too — people who showed amazing courage and fortitude or simply said what needed to be said.

Voting for Crikey‘s Person of the Year and Arsehat of the Year closes midday on Thursday December 23, and the winners will be announced the next day. Get your ballots in!

Arsehat of the Year nominees

We need trust in experts more than ever, and the likes of Norman Swan (who blithely admitted he “probably did cause some vaccine hesitancy”) Bill Bowtell, Raina MacIntyre, Zoe Hyde and others are, of course, all entitled to their views on the management of COVID. But the constant reporting of those views (regardless of how regularly their doomsday prediction turned out to be off the mark, or regardless of the strict relevance of their area of expertise) has not, we submit, been good for the public discourse in a time of crisis.

Young is a separate category altogether. Say what you want about the doomsday experts, they wouldn’t be much of a problem if they didn’t get the constant attention of the media. Jeannette Young, as one of the many celebrity chief health officers in the time of COVID, has different responsibilties. Her proclamation that 18-year-olds in her state shouldn’t take a demonstrably safe vaccine was, ostensibly, because of the vanishingly rare blood clotting disease, though conveniently it also scored political points against Scott Morrison. It was inevitably seized on by the anti-vaxxers, and she stood by it even after it became clear the Delta variant could put children in hospital.

Never had the state level of politics had more power, and never had they looked less worthy of it. There was Gladys Berejiklian’s resignation and the humiliating ICAC experience that followed. Annastacia Palaczszuk’s use of false information to encourage vaccine hesitancy in her state. Steven Marshall’s comically addled government in South Australia. And yes, we’re including the scandal-plagued and plague scandal prone Dan Andrews (who must be thanking his lucky stars that the opposition in Victoria is a literal clown car) and emperor of the hermit kingdom Mark McGowan in this list.

We make absolutely no assessment whatsoever on the allegations he faced at the beginning of the year. He’s in this list for the series of catastrophic errors of judgement that followed. In some ways, his case is reminiscent of former Arsehat recipient Angus Taylor, a man whose uninspiring record in public life had never been allowed to slow his journey toward the top. Until this year, when something that could not be swatted away let loose an avalanche of poor decisions: refusing to stand aside or allow an investigation, suing the ABC, portraying the nothing result as a victory, and, finally, thinking it was in any way fine to have a blind trust helping him fund his legal actions.

The prime minister, having been robbed of the title in 2020, responded like the true champion Arsehat he is, redoubling his efforts. Where to start? The habitual and compulsive lying that eroded our democracy and humiliated Australia on the world stage? The sneering contempt for any kind of accountability? The chaotic botching of the vaccine rollout? The horrifying response to the allegations of sexual assault in Parliament House? He’s been an all-timer this year.

A big group, but it’s hard to pick just one of the many forces that looked to exploit vaccine anxieties for personal gain. Whether it’s politicians like Craig Kelly, Gerard Rennick and Pauline Hanson, neo-Nazi figures, opportunistic wellness influencers, or groups encouraging anti-vax sentiments in Indigenous communities, their actions are beneath contempt.

Somyurek has come to represent the ugliest side of the Victorian Labor party with the branch stacking scandal of 2020. Since then, he’s returned as an irony-free lecturer on good government, obsessed with ruining Dan Andrews’ life, returning to Parliament to vote against the flawed but necessary pandemic laws, thus giving more oxygen to the kind of people who set up gallows outside parliaments.

Person of the Year nominees

When she was accepting her award as Australian of the Year for her role in the “Let Her Speak” campaign, Tame surely couldn’t have known what was to come. Tame became one of the faces and voices of Australia’s long-delayed reckoning with the treatment of women in public life. To sum up using her own words, which concluded her powerful address to the National Press Club: “Share your truth. It is your power. One voice, your voice, and our collective voices can make a difference. We are on the precipice of a revolution whose call to action needs to be heard loud and clear … Let’s keep making noise, Australia.”

Higgins’ bravery and principles in going public with her alleged rape in Parliament House will be remembered for a long time to come. She sparked a long-overdue debate about gender-based violence in Australia and gave Australian women a figure to rally behind as they marched in Canberra and across the country to say enough is enough. And she did this in the face of insults from her former employer, who expressed regret in public and called her a “lying cow” in private. She did it in the face of the old boys brigade in the media, keen on muddying the waters. And most of all, she did it in the face of alleged backgrounding from the Prime Minister’s Office — Morrison made an extremely equivocal denial and then released all of the smears he was accused of saying as part of the report into the matter anyway.

As the NSW Environment Minister, Matt Kean this year managed to do what Scott Morrison could not: get the Nationals on board with an ambitious emissions reduction target. This makes him one of the very, very few politicians in 2021 to produce a response other than fury, disgust or just toe-curling embarrassment.

She was far from the only woman to produce staggering reporting this year, but Samantha Maiden’s work formed the spine of that bracing moment in March, sending shudders down the dam of silence that has so long existed around harassment in Parliament House. She produced one blockbuster story after another, setting the national debate and having a big part in bringing about changes that have seen ministers and a backbencher offer their resignation. Once again, for her trouble, she was the anonymous recipient of a smear from the prime minister — for which he would have to later offer a shame-faced retraction.

The Tasmanian senator was the recipient of a huge number of votes from Crikey readers this year. She delivered one of the speeches of the year in Parliament, tearing into One Nation for its anti-vaccine mandate bill: “Being held accountable for your own actions isn’t called discrimination, it’s called being, you wouldn’t believe it, a goddamn bloody adult.” It could have been the year’s motto.

Kerr, the Australian women’s football team captain, continued her trajectory as one of Australia’s all-time greats, scoring 21 goals for Chelsea in the Women’s Super League and winning the Golden Boot. But let’s face it, she makes it onto the list for executing a perfect hip-and-shoulder to drop a pitch invader. She earned a standing ovation from the crowd, a yellow card from the ref, and the pitch invader had to be removed from the field with a mop and bucket. Look, we’re not condoning violence, but watching Kerr do to this specimen of male entitlement what most women in Australia been wanting to do all year to every smug-faced male politician and talking head who’s had the audacity to speak on behalf or over the top of Australian women was just *chef’s kiss*.

Once again, voting for Crikey‘s Person of the Year and Arsehat of the Year closes midday on Thursday December 23, and the winners will be announced the next day.