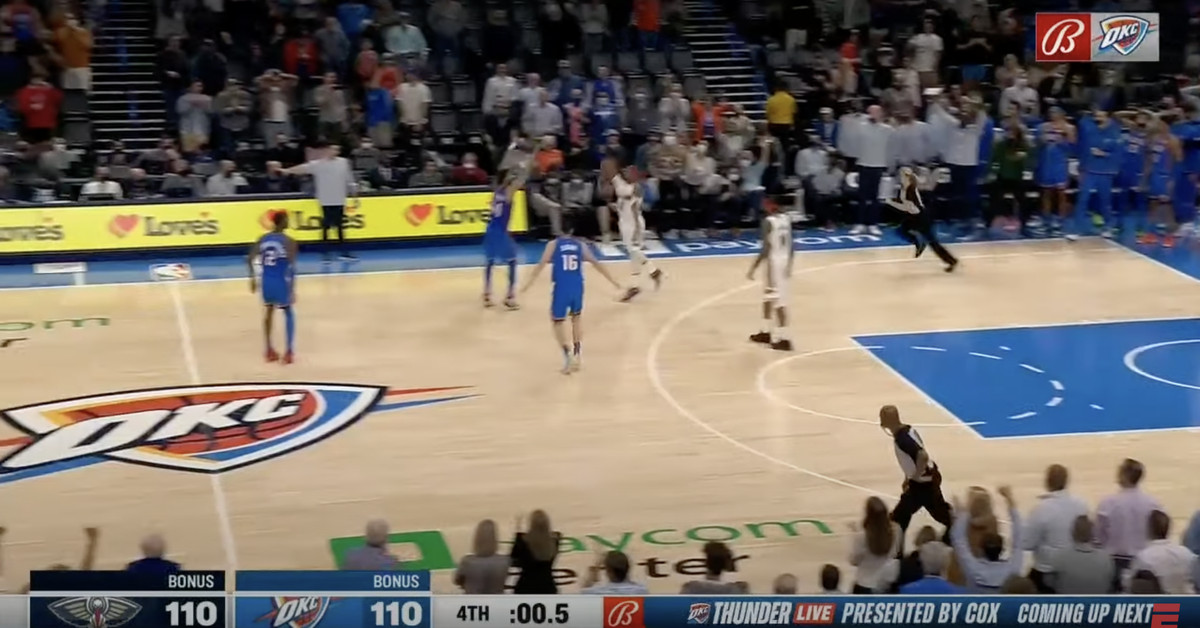 A game between the New Orleans Pelicans and Oklahoma City Thunder should not garner much consideration this season. The Pelicans have been without Zion Williamson all season, and he’s not returning from a foot injury any time soon. The Thunder are taking the long-term view on their rebuild, and don’t expect to be competitive for a couple more years. Only the Orlando Magic and Detroit Pistons have been worse than these two teams all season.

It makes perfect sense, then, that Thunder-Pelicans gave us not only the best ending of the season, but also one of the greatest buzzer-beaters of all-time.

Here’s the scene: the Thunder were inbounding down three with 4.5 seconds left after a pair of free throws from Brandon Ingram. The Pelicans didn’t want to risk OKC hitting a game-winning three-pointer, so they intended to foul right away. New Orleans coach Willie Green even said he told the refs they were going to foul before the ball was inbounded.

The Thunder got the ball in to their star guard Shai Gilgeous-Alexander, and Pelicans veteran Garrett Temple tried to foul. Gilgeous-Alexander launched a shot from 31-feet away hoping he would draw a three-shot foul. The refs never called the foul. The shot went in anyway. Tie game.

New Orleans inbounded the ball under their own basket with 1.4 seconds left. Devonte’ Graham did this:

That’s a 61-foot buzzer beater for the win. There’s never been a farther game-winning shot at the buzzer in league history.

Look at how much longer Graham’s shot is than every other game-winning shot since 2000.

The longest buzzer-beaters in NBA history

I’m still not over this Devin Harris shot more than a decade later. This was credited as a 43-foot game-winner during a Feb. 2009 game against the 76ers.

Tyreke Evans stuns the Grizzlies with the 50-foot game-winner

This is the buzzer-beater that’s most similar to Graham’s. After OJ Mayo hit a go-ahead jumper to put the Grizzlies up one, Tyreke Evans launched a shot from beyond halfcourt that was straight cash. Kings win.

This was credited as being from 50-feet away.

Erving was a 35-year-old in his second-to-last season.

Graham’s comfortably looks longer than all of those. While it wasn’t a game-winner, Jerry West’s 60-foot bomb to send a game to overtime in 1970 also deserves a mention.

Baron Davis’ 89-footer is the longest shot in NBA history

Our friend Jon did a video on it:

Who would have thought a Pelicans-Thunder game in 2021 would be so fun?