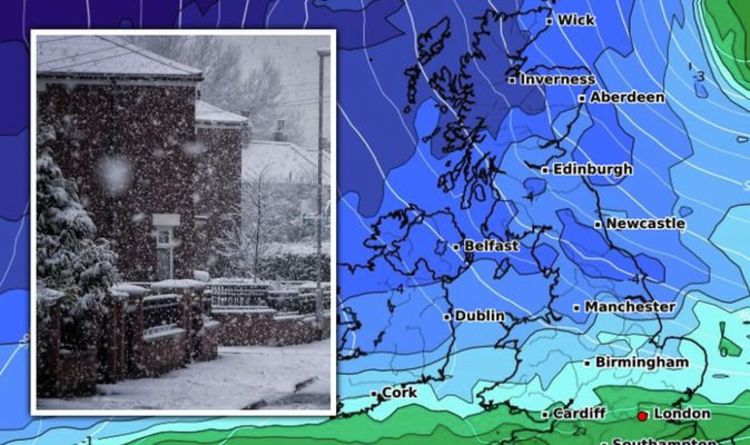 Maps and charts show the weather in the UK turning more unsettled as the festive week rolls on, with pressure from the Atlantic and northwest causing rain, snow and heavy winds.

Maps from WXCharts show that the week leading up to Christmas Day there is a cold front battering Britain from both the northeast and from the southwest.

From Thursday, December 23, charts show a front of snow and rain will push northeastwards through Britain, with up to 3mm of snow falling over the north of Wales and the midlands at midday.

Christmas Eve sees even more unsettled weather, with snow on the ground in much of the country.

From the north of Cardiff all the way to Wick, as well as Northern Ireland, 2cm of snow is expected to settle on the ground as temperatures fall to -1C in much of the country.

Ian Simpson, Netweather.tv forecaster, said Christmas week will see “cold air coming down from the north and mild air coming up from the south, resulting in somewhat more unsettled conditions”, with a chance of snow.

“This change will most likely set in by Thursday, December 23, when there is potential for some snowfall especially for the Midlands and the north of England.

“On the northern flank of the fronts marking the boundary, some places may well see a white Christmas, but there is a lot of uncertainty over where the fronts end up.

“At present, the region from the Midlands up to southern Scotland looks the most likely area to see snow on the big day, with southern areas seeing rain and the north of Scotland being cold and dry.

“As it’s a long way off still, there will probably be further changes in the specifics as we get nearer the time.”

Dan Rudman, Met Office expert meteorologist, also said however: “There is still a lot of uncertainty in the forecast for the Christmas period.

“Whilst there is certainly a risk of wintry conditions for many places, other outcomes are still possible such as warmer air to move across the UK bringing rain widely with any potential snow being restricted to higher ground and the far north.”

James Madden, forecaster for Exacta Weather, also said: “Snow could arrive as early as Christmas Eve in parts of the south.

“Further snow is likely during the latter part of Christmas Day and on Boxing Day.

“Weather models have altered to include high-pressure changes, and this could bring widespread snow during the latter part of the month.

“This will be one to monitor over the next couple of days.”

A Sudden Stratospheric Warming (SSW) similar to the driver for 2018’s beast from the east will boost the freezing blast.

Mr Madden added: “A Sudden Stratospheric Warming (SSW) will contribute to bringing a very cold easterly and the ever-increasing risk for widespread snow during the final third of December.

“Temperatures could also dip as low as -10C in the coldest and iciest areas over the festive period.”