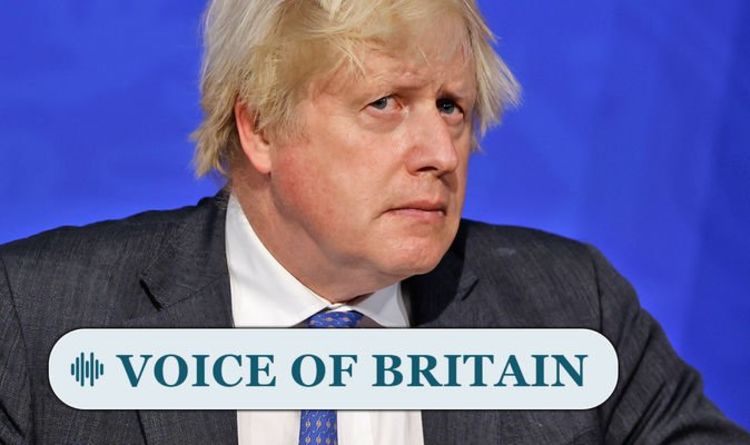 Boris Johnson is being ‘put on notice by MPs’ says commentator

Readers voted in our poll on whether the Prime Minister can hang on to his role in the wake of the staggering loss of what was an ultra-safe seat for the Conservatives. Some 58 percent (1,723 people) said no, while 42 percent (1,247) said yes.

Commenting on this website, one reader with the username ‘MeerJabsNodig’ blasted: “He’s delivered BRINO instead of Getting Brexit Done!

“He’s given in the EU at all points! He’s all bark and no bite! He’s given the French more and more fishing licenses! He’s just stood there are allowed the French to threaten the nation!

“Yes, he needs to go! We need someone who isn’t afraid to retaliate and willing to go WTO!”

Another, ‘whom’, wrote: “Think Boris has served a purpose with Brexit (an ongoing battle he appears to be going soft on) but he has reached his sell-by date.”

A third, ‘The psychiatrist will see you now’, said: “The time has come for him to get on his Boris bike and leg it. Far too much waffle when we need a strong leader to look after this country and tell the EU to do one and the world we are open for business.”

One more reader, ‘Robert180650’, fumed: “His position becomes more untenable by the day! Just like his decisions!”

However, other readers defended the embattled Prime Minister.

The PM has faced potentially the most damaging week in his premiership (Image: GETTY)

One with the username ‘charlieboy2’ commented: “It’s all right saying Boris must go but who is going to replace him?”

Another, ‘Joe1690’, wrote: “Just let him get on with the job he is the best one to make United Kingdom great again.”

Our poll comes after the Liberal Democrats overturned a huge Tory majority to win the North Shropshire by-election on Friday.

The vote in the West Midlands constituency was triggered following the resignation of Owen Paterson amid a row over sleaze.

DON’T MISS
‘Enough is enough’ Nadine Dorries booted from Tory WhatsApp group [INSIGHT]
Tories turn on PM after Frost walks away – ‘Running out of time’ [ANALYSIS]
Get a grip Boris! Johnson given last chance to save himself [VIDEO]

The result was a major shock as North Shropshire had returned a Conservative MP in every vote since 1983, which was the constituency’s first election in its current form.

Meanwhile, beleaguered Mr Johnson has faced potentially the most damaging week in his premiership.

The Prime Minister also suffered his biggest rebellion since entering No 10 with 100 Tory backbenchers defying him to vote against Covid passports for large venues earlier this week.

And in the latest body blow, last night it emerged that Lord Frost had sensationally quit.

The Brexit minister, who has led negotiations with the EU, reportedly handed in his resignation letter to Mr Johnson last week with an agreement to leave in January.

But in a letter to the Prime Minister released on Saturday evening, he said that he was “disappointed that this plan has become public this evening and in the circumstances I think it is right for me to write to step down with immediate effect”.

But he added: “The challenge for the Government now is to deliver on the opportunities it gives us.

“You know my concerns about the current direction of travel.”

He also expressed concerns the unlocking from Covid restrictions had not proved “irreversible” as promised.

He said: “I hope we can get back on track soon and not be tempted by the kind of coercive measures we have seen elsewhere.”