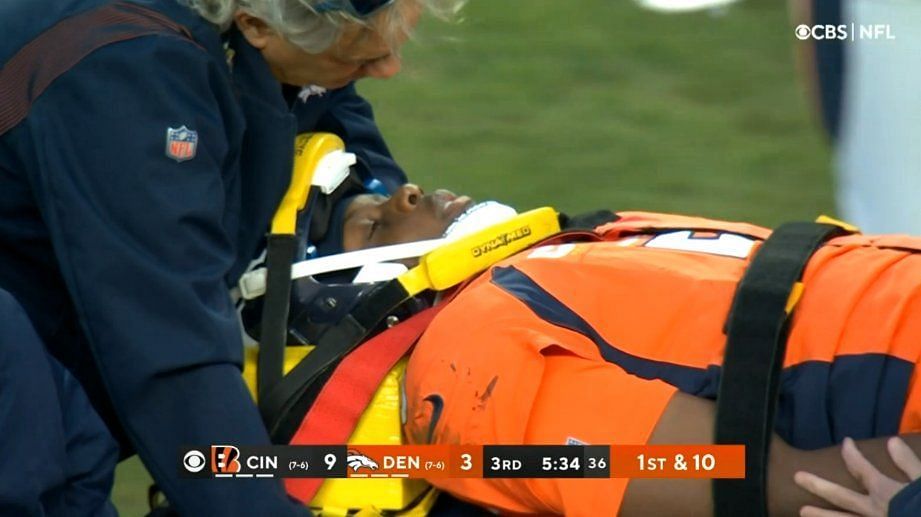 Denver Broncos quarterback Teddy Bridgewater had a short game on Sunday. Facing Joe Burrow and the Cincinnati Bengals, Bridgewater had his team on the move with five minutes to go in the third quarter.

Facing a second-and-five, Bridgewater dropped back and was forced to scramble. He was running for a first down when he collided with two Bengals players. While the hit from the defenders did not have a high impact, it was only when Bridgewater hit the ground that it all went wrong.

Bridgewater carted off after being knocked unconscious

The initial impact from the hits did not cause any damage to the Broncos quarterback, but it was when he hit the turf that the damage occurred. Bridgewater hit his head flush on the ground, which knocked him unconscious.

It was evident straight away that Bridgwater had been knocked out. His Denver team-mates were quick to signal for medical personnel to come to his aid.

Watch the incident below.

Soon after the incident, Bridgewater was surrounded by players from both teams along with several medical personnel to tend to him.

It is another scary incident to happen in the space of a couple of days after Los Angeles Chargers tight end Donald Parham suffered a similar injury while attempting a catch.

I just hate seeing these concussions with Donald Parham, Teddy Bridgewater and Alan Lazard all hitting the ground face first. Among the things I hate about it is I can’t imagine any way you can change NFL rules to prevent such injuries.

I just hate seeing these concussions with Donald Parham, Teddy Bridgewater and Alan Lazard all hitting the ground face first. Among the things I hate about it is I can’t imagine any way you can change NFL rules to prevent such injuries.

Just hope Teddy Bridgewater is OK. Can’t stop thinking about it. Hoping the beautiful sunset here is a good sign.

The tight end caught a pass from Justin Herbert in the end zone but could not hold on as his head smashed against the turf, just like Bridgewater’s.

Incidents like these remind the NFL community of the dangers of football and why the league has such a hard stance on hits above the head. While some might seem worthy of a penalty flag, the NFL has made it a priority to protect player safety at all costs.

Bridgewater was taken to hospital as a precaution. Reports suggest that he has movement in all his extremities, which is a great sign. His fall, while not bad by any stretch, certainly did have him feeling the full impact from hitting the ground as he was slightly pushed down by a Bengals defender.

Also read: NFL fans were shook after watching Donald Parham get knocked out cold vs Chiefs