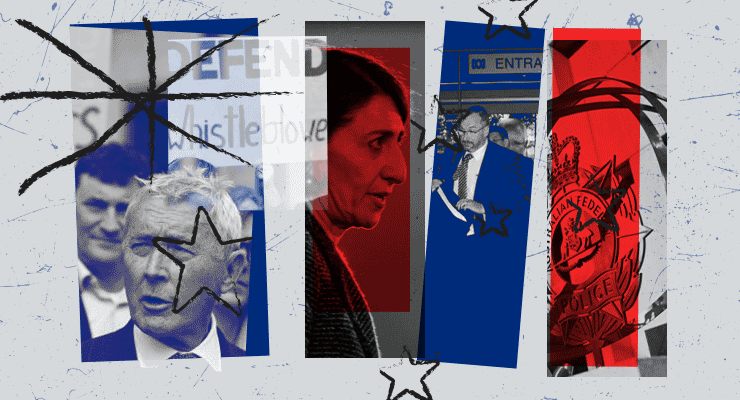 This is part two in a series. For the full series, go here.

What are the signs of a declining democracy? Australia’s politicians have served up plenty of them in the last few years.

2018: The Andrews government desperately fights to stop the exposure of the “red shirts” scandal, in which 21 Victorian Labor MPs spent nearly $400,000 of taxpayer money campaigning for reelection. Victorian Police later decided not to charge anyone in relation to the scandal.

2018: Then-attorney-general Christian Porter approves the Director of Public Prosecutions charging Witness K and Bernard Collaery with conspiracy in relation to the revelation that the Australian Secret Intelligence Service bugged the Timor-Leste cabinet on the instruction of the Howard government. Over the next three and a half years, Porter and his successor Michaelia Cash repeatedly intervene to drag out the trial, demanding the use of secret evidence unavailable to the defence and trying to keep proceedings secret.

2019: AFP officers raid the home of journalist Annika Smethurst and the Sydney offices of the ABC looking for information on the source of embarrassing leaks in relation to planned expansion of intelligence agency powers and war crimes committed by Australian troops.

January 2020: The Australian National Audit Office reveals that a sports infrastructure grants fund was systematically rorted by Nationals Minister Bridget McKenzie to direct funding to marginal seats ahead of the 2019 election.

September 2020: A panel appointed by the Morrison government and headed by fossil fuel company executives drafts a government plan for a “gas-led recovery” from the COVID-19 pandemic.

March 2021: Scott Morrison misleads Parliament by claiming he has not been updated by his departmental secretary, veteran Liberal staffer Phil Gaetjens, on his inquiry into the handling of the Brittany Higgins matter by Morrison’s office. Gaetjens later reveals he told Morrison he had halted the inquiry more than a week before. The inquiry remains incomplete 10 months later.

June 2021: A branchstacking scandal erupts in the Victorian ALP, centred on powerbroker Adem Somyurek. Daniel Andrews loses three ministers (and a fourth in October) and the federal party intervenes to impose outside control on the branch.

June 2021: The Australian National Audit Office reveals the multi-billion dollar Urban Congestion Fund was rorted by the then-Liberal minister Alan Tudge to direct funding to car parks in Liberal marginal seats ahead of the 2019 election. Many of the projects remain incomplete or uncommenced nearly three years later.

July 2021: The ABC reveals the close links between Victorian Labor and Crown Resorts, which has been a major donor to the ALP, and how the Victorian gaming regulator has been neutered.

September 2021: Then-industry minister Christian Porter admits receiving hundreds of thousands of dollars in anonymous donations and refuses to disclose the identities of the donors. He resigns from the ministry but is ruled not to have broken parliamentary disclosure rules.

September 2021: Berejiklian resigns after NSW ICAC commences investigation into her conduct in relation to her former boyfriend, corrupt Liberal MP Daryl Maguire, a relationship she maintained beyond the point when she sacked Maguire as a parliamentary secretary over corruption in 2018

November 2021: The Jenkins report reveals the extent of workplace harassment, sexual assault and physical violence in Parliament House, with one-third of respondents, including many MPs, reporting sexual harassment.

November 2021: Scott Morrison attacks the NSW ICAC as a “kangaroo court”, lying about its investigation of Gladys Berejiklian and promising he would never allow such an integrity body in the Commonwealth.

December 13: The third anniversary of Morrison and Porter promising a federal integrity body, without any bill being introduced into Parliament for its establishment. Morrison blames the opposition for his failure to introduce the bill.