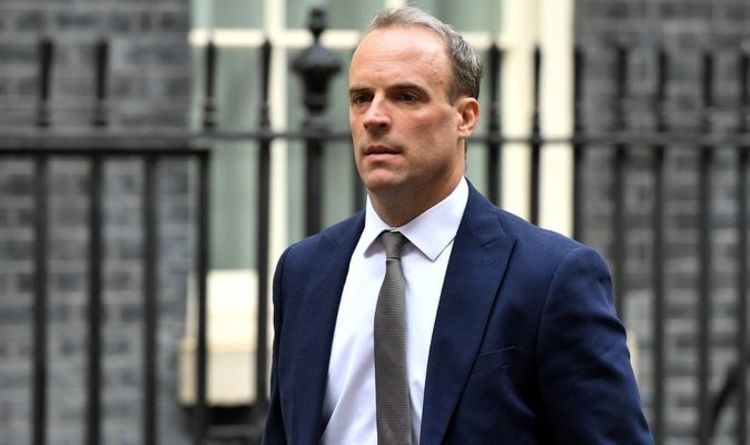 Deputy Prime Minister Dominic Raab, 47, was wheeled out to defend Downing Street officials yesterday morning as pressure piles on Number 10 to explain an image showing Boris Johnson, 57, his wife Carrie Symonds, 33, and 17 colleagues enjoying wine and cheese in May 2020. Coronavirus restrictions at the time required Brits to limit social mixing between households to just two people and ensured such social encounters could only take place outdoors at a distance of at least two metres apart.

Speaking to Sky News, Mr Raab insisted the photo showed a staff meeting and backed up Number 10’s claim by pointing out workers were “all in suits or predominantly formal attire”.

The Esher & Walton MP said: “Given the pressures Number 10 were under, they might have a drink after the formal business has ended.”

The Brexit-backing former Foreign Secretary went on to tell BBC Radio 4 Downing Street staff had been working “under gruelling conditions” and were just enjoying a drink after a long day.

But NHS workers have been left raging after hearing Mr Raab’s comments.

JUST IN: ‘Unacceptable!’ SNP ‘MUST take action over damaging leaks as Scotland ‘way behind’ England

The clinical lead for Covid services at the Royal Devon and Exeter NHS Foundation Trust Dr David Strain claimed the Justice Secretary of “misrepresenting the situation”.

Dr Strain, who once said on Twitter “Brexit is a bad idea”, told the i: “I would suggest our team, working in protective equipment all day, caring for people who were suffering and dying on a daily basis would be a better definition of working in ‘gruelling conditions’.

“We would have loved to sit down and share a drink to console our colleagues who were physically and emotionally drained at the end of their long shifts.

“The comment is offensive to the frontline staff who struggled with coming to terms with the day to day stresses of working in Covid and insulting to the memory of those who lost their lives in the early phase of the pandemic.”

“On this occasion there were staff meetings following a Number 10 press conference,” they said.

“Downing Street is the Prime Minister’s home as well as his workplace.