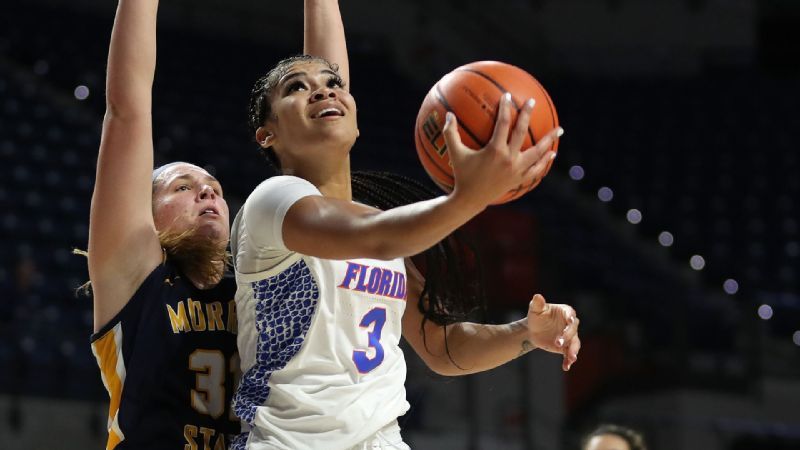 GAINESVILLE, Fla. – Florida women’s basketball will enter Southeastern Conference play with 10 wins for the first time since the 2015-16 season after earning a decisive 67-51 victory over Murray State on Tuesday afternoon.

Defense stole the show for the Gators (10-3, 0-0 SEC) in Exactech Arena, as Florida used a season-best effort to force Murray State (8-3, 0-0 OVC) into 25 turnovers, resulting in a 22-10 edge in points off turnovers. The Orange & Blue, led by Kiara Smith with three steals, tallied 13 steals on the evening which helped lead to a 21-4 advantage in fast break offense.

Offensively, Lavender Briggs led the charge with 12 points while freshman Alberte Rimdal tied her career-best with 11 points, including a 3-of-4 performance from behind the arc. Smith added 10 points and three assists, helping the Gators to 14 assists on 28-of-76 (36.8%) shooting from the field.

Florida held control of the rebounding battle on Tuesday as well, getting physical for a 43-39 edge on the glass. Nina Rickards led the Gator effort with seven while Briggs pulled-down six of her own.

Seventeen of UF’s 43 rebounds came on the offensive side and the Gators also ended with a 38-26 advantage in points in the paint.

Despite the final score, it was far from an easy victory for the Gators. The Racers came out swinging in the first half, jumping out to a 5-2 advantage and holding a 9-8 lead just before the under-five media timeout. A quick 10-3 burst, fueled by a pair of triples from Rimdal, helped Florida gain control at 18-12 before taking a four-point lead into the second quarter.

Much like the first quarter, the second frame was a back-and-forth affair for both squads. Zippy Broughton managed to push the Gator lead to seven following a steal and layup with 5:17 on the clock, but five unanswered points from the Racers would close the gap to 25-23 with 2:32 on the clock.

Continuing to stay aggressive, Broughton closed the half with an and-one after muscling her way into the lane and giving UF a 28-23 halftime lead.

The Orange & Blue brought the intensity to start the second half, almost immediately forcing a timeout after Emanuely de Oliveira found Briggs on a fast break to extend the lead to 32-23.

The Racers would get five straight points to claw back within four at the 6:31 mark, but the Gators would open-up a 12-point lead following a 9-2 run, featuring back-to-back jumpers from Briggs.

Both teams would trade baskets until the final possession of the frame when Jeriah Warren managed to split defenders and beat the buzzer in the lane to help UF to a 49-37 lead after three.

The fourth quarter was all Gators. Another 9-2 run, capped-off by a Smith jumper, gave Florida a seventeen-point cushion at 58-41. The UF defense and length continued to ware-down the Racers, as Rimdal’s third triple would give the Gators their biggest lead of the day at 67-47 with 2:14 the clock before taking the victory, 67-51.

Florida saved their best for last, shooting 7-of-15 in the final frame to help pull away from the scrappy Ohio Valley team.

Defensively, the Gators allowed the Racers to connect on only one shot from behind the arc in the second half and held the opposition to 5-of-13 from the floor in the fourth quarter.

On defensive play…“Defense is something that we really hang our hat on. We are trying to improve every single day. We feel like that’s an advantage that we have, night in and night out, with our foot speed, our multiple efforts, on both ends of the ball, but especially on defense. That’s something that you can control. You can always control your defensive effort and intensity. That’s a really talented Murray State team- averages 76 points per game. So, to hold them to a season low 51, that was very, very good heading into the holiday break.”

On the matchup in the post… “Katelyn Young is a very talented post player, and we knew that coming in. I think she leads the country in field goal percentage. So, we had worked really hard this week on knowing where she was trying to be. Her footwork and her angles are exceptional. I thought our post players – Floor, Manu, Christina- did an exceptionally good job, and Jordyn Merritt. I thought you saw, Jordyn really excels in guarding inside even though they might be a little bit smaller. But I thought the four of them did an exceptionally good job on defending Katelyn tonight.”

On Kiki Smith… “I mean we trust Kiki to what her instincts are. I think you can see our guards are getting much, much better at playing off of each other. You saw them speed them up just a little bit and then go into rotation today in the full court, which was really nice to see. We trust Kiki, we trust her judgment, and she really sets the tone for us on the defensive end of the floor and the offensive end of the floor.”

On Alberte Rimdal… “Berte is a really, really talented player. She’s going to play a lot of minutes for the Gators over the course of her career. I think (Tuesday) you saw the speed of the game really slowed down for her in her mind. But, she works tirelessly. She’d been working this last week on her decision making: whether to shoot or pull up, drive. I thought that you could see her confidence in that today in the game.”

The Gators will be back in action following the holiday recess, opening SEC competition with a road trip at Mississippi State in Starkville, Miss., on Dec. 30.