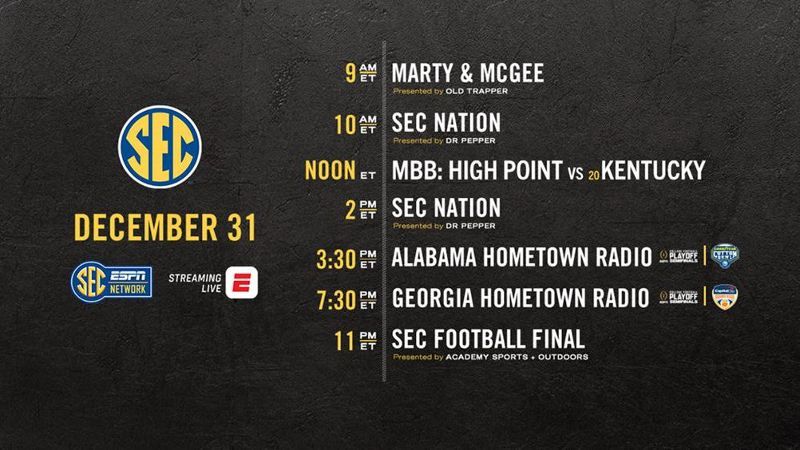 SEC Network is slated to present nearly 30 hours of wall-to-wall studio analysis and in-game reaction surrounding the College Football Playoff semifinals and SEC football teams participating in the postseason. On Friday, Dec. 31 alone, SEC Network will spotlight more than 15 consecutive hours of live programming, the most in a single day in network history, as Alabama and Georgia fight for their places in the grand finale of college football, the College Football Playoff National Championship Presented by AT&T.

SEC Now and SEC Nation will expand their coverage of SEC football, including several live editions over the days leading up to kickoff, as well as multi-day reporting of press conferences and media days from SEC Network sets at both the College Football Playoff Semifinal at Goodyear Cotton Bowl Classic in Arlington, Texas, and the College Football Playoff Semifinal at the Capital One Orange Bowl in Miami Gardens, Fla.

Kicking off on Monday, Dec. 27, SEC Network will carry the press conferences and media opportunities from both Dallas and Miami throughout the week, including a full four hours of live on-site insight from Media Days at the Goodyear Cotton Bowl Classic and Capital One Orange Bowl. Laura Rutledge hosts Wednesday’s SEC Now from Arlington, with Tim Tebow, Roman Harper and Jordan Rodgers on set from AT&T Stadium, joined by Dari Nowkhah hosting in Miami with Gene Chizik and Chris Doering.

On Thursday, Dec. 30, SEC Now will feature live coverage from the head coaches press conferences at both semifinals, followed in the afternoon by The Paul Finebaum Show Presented by Johnsonville live from Arlington at 3 p.m. ET.

Friday’s full day of coverage begins with Marty & McGee Presented by Old Trapper at 9 a.m., as Marty Smith does the show from Miami and Ryan McGee is live on site in Arlington. SEC Nation Presented by Dr Pepper has its first episode of the day at 10 a.m., with Rutledge, Tebow, Harper, Rodgers and Paul Finebaum prepping fans for the games of the day. In addition to Alabama and Georgia in the CFP semifinals, the SEC will have five teams in action over the coming days to preview Friday morning.

SEC Nation Presented by Dr Pepper returns at 2 p.m. ahead of kickoff from the Cotton Bowl, and then will wrap up action from Arlington and prime viewers for the primetime matchup in Miami. Post-game from Hard Rock Stadium will be SEC Football Final Presented by Academy Sports + Outdoors with Nowkhah, Chizik, Doering and Benjamin Watson recapping the day.

In addition to extensive CFP semifinal studio coverage, SEC Network has SEC fans covered for game action, as Tide and Bulldog faithful alike will be able to hear the call of their favorite radio broadcasts as part of ESPN’s MegaCast coverage.

Fans can listen to the local radio broadcast of both the Alabama Crimson Tide and the Georgia Bulldogs on SEC Network, with each radio broadcast’s audio feed synced up with ESPN’s presentation. SEC Network’s MegaCast feeds are made possible in conjunction with Alabama Crimson Tide Sports Network Powered by LEARFIELD and Georgia Bulldog Sports Network.

SEC Network social and digital will once again provide on-site, behind-the-scenes coverage from both SEC squads at the College Football Playoff National Championship. Fans can follow along with SEC Network on Twitter, Instagram and Facebook, as well as at SECNetwork.com.