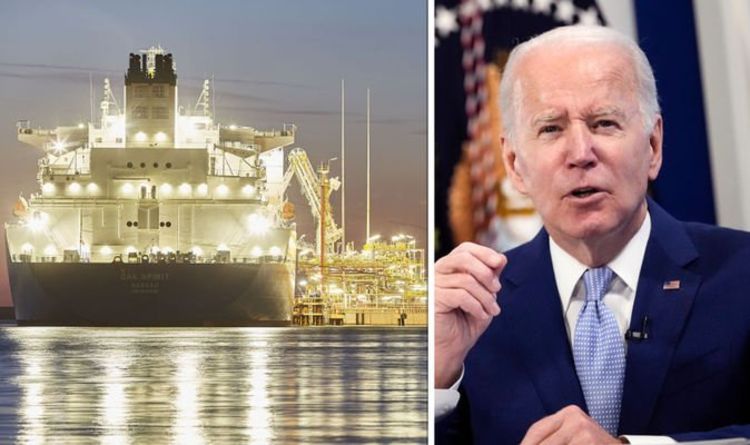 The number of tankers crossing the Atlantic with US liquefied natural gas (LNG) which declared western European ports as their destinations jumped 50 percent in just 24 hours on Thursday as the continent’s energy crisis deepens. Additionally, there are another 11 US LNG cargoes with undeclared destinations whose paths suggest they are Europe-bound.

US cavalry to Europe’s rescue

Former Sunday Times editor Mr Neil, who stood down from his role at GB News earlier this year, tweeted: “US cavalry to Europe’s rescue.

Mr Neil, who quit the BBC for GB News last year, added: “Another 11 LNG tankers with US gas also thought to be on their way. Thank you, America.”

The number of tankers rose from 10 on Wednesday, shipping data indicated.

Among the ships in transit are the Minerva Chios, which left Cheniere Energy’s Sabine Pass LNG export terminal in Louisiana in mid-November and was in the Indian Ocean before being rerouted towards Europe last week.

The resultant power shortage has prompted countries to burn more coal and even oil to keep the lights on and homes warm, flying in the face of the COP26 commitment to phase out fossil fuels.

News of the LNG cargoes heading to the continent to offer relief saw gas prices fall from record levels.

Europe’s benchmark gas price climbed to a new record on Tuesday, up almost 800 percent since the start of the year.

The price eased on Friday, but it was still up more than 400 percent.

Of the 15 LNG tankers which have confirmed the ports they are heading to, the UK, France and Spain are the destinations of four each, with the Netherlands, Gibraltar and Malta getting one each.

Additionally, an LNG tanker whose destination was undeclared is currently moored at the Milford Haven anchorage in Wales.

Europe got a taste of how bad this winter’s energy crisis may become after Kosovo began cutting electricity supplies to most of its two million people.

The Balkan country, which is one of the poorest nations in Europe, introduced rolling two-hour blackouts for most consumers from Thursday, electricity distributor KEDS confirmed.

Speaking on Friday, Russian President Vladimir Putin said the European Union can only blame its own policies for record gas prices as some of its members resell cheap Russian gas at much higher prices within the bloc.

Putin also called on the EU to approve a new Russian gas route, the Nord Stream 2 pipeline, to ease the price crunch.

Nord Stream 2 is opposed by Washington and especially several east European states, which say the pipeline will make the EU even more reliant on Russian gas, which already supplies 35 percent of the bloc’s gas needs.

The pipeline from Russia to Germany, built in September, is still awaiting regulatory approval from both Berlin and Brussels.

Speaking at a joint meeting of the State Council and a council on science and education, Mr Putin said: “The additional gas supplies on the European gas market would surely reduce the price on an exchange, on the spot (market).”

Adding to the squeeze, the Yamal-Europe pipeline which usually sends Russian gas to Western Europe was flowing in reverse for a fourth day on Friday, pumping fuel from Germany to Poland, data from German network operator Gascade showed.

A US LNG tanker unloads supplies in Poland in 2016 (Image: GETTY)

Gazprom usually books capacity via the route on a short-term basis, after Poland and Russia chose not to extend their long-term transit deal last year.

Mr Putin claimed Poland had “sidelined” Russia from managing the Yamal-Europe pipeline, which has been working in reverse mode by sending gas eastward.

The pipeline runs from Russia to Belarus and further to Poland and Germany.

Mr Putin explained: “This does not increase the Russian gas volumes on the European market, so the price is rising.”