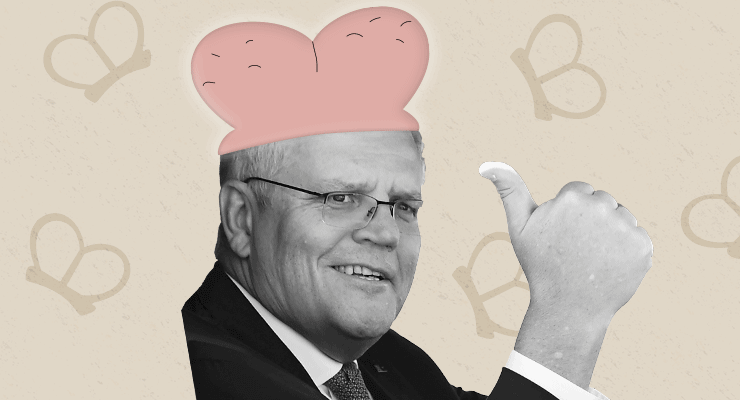 It’s hard to know quite where to start with the winner of 2021’s Crikey Arsehat of the Year award. The relentless dysfunction, the contempt for accountability and tolerance for corruption, the sense he loves his title and hates his job — it billows in all directions like ink in water, drawing the eye in too many directions at once.

Still, over the course of a single week in March, Scott Morrison managed to display a great many of the traits that ultimately delivered him one of the most comfortable victories in the history of this award.

On Monday, March 22, it was revealed he had misled Parliament about the status of the internal investigation concerning allegations of rape by former staffer Brittany Higgins.

On Tuesday, under increasing pressure over the workplace culture in Parliament, he derailed his own press conference by attempting a clumsy gotcha at the expense of a journalist, attempting to weaponise a harassment claim that, it turned out, hadn’t been made. By the evening he had offered a shame-faced retraction — on Facebook. It is not collected on the media section of the PM’s website.

On Thursday, when asked about alleged backgrounding against Higgins and her partner by his office, he reached for equivocation: “There has been no one in the gallery, nothing has been raised with my office from anyone in the gallery making any of those accusations or any discomfort about anything that my office has done.”

You will note, there is no actual denial of anything in there. An investigation by the matter, conducted by Morrison’s own chief of staff, takes over six months and finds “no first-hand evidence” of backgrounding

That same week, Morrison ducked an interview with Leigh Sales (for the 13th time) and instead chose the chummier surroundings of Ray Hadley’s studio, having been assured he wasn’t going to be “carved up”.

Those choices, and what they represent, don’t quite cover everything, but they illustrate quite a lot about what it is to have Scott Morrison as prime minister. The gossamer-thin skin. The obsessive aversion to taking responsibility, as though exposure to it would bring on anaphylaxis. The approach to politics as a series of discrete transactions to be navigated, with no greater vision being served — no end game but the game itself.

And, of course, it illustrates his tendency (whether compulsive or indifferent) to openly and shamelessly lie.

This was before Crikey was moved to itemise the many lies and falsehoods of Morrison’s time at the helm — a list he added to several times after it was initially published, most notably in dicking over the French as part of Australia’s clumsy reversal out of the Naval Group submarine deal.

But if we focus too long on his personal qualities, we let him off the hook professionally. Primarily this year will be remembered for the botched vaccine rollout — and there’s reason to fear in 2022 it will be the same story with the booster program.

His constant, clanging, tone-deaf rhetoric on the issues of sexual violence in Parliament.

The relentless fight to keep his government from facing even the most basic scrutiny. The obvious comfort with running one of the most corrupt governments Australia has ever seen.

And most consequential, there was the long awaited net zero by 2050 policy — called, naturally, “The Australian Way” — a 100-odd PowerPoint slideshow so content-free even Morrison’s boosters in the press seemed surprised.

The language of his time in office has been passive from the start, from “I was not the one who sought to change [the Liberal party leadership]” to “That’s a matter for the states” to “I don’t hold a hose”.

And it’s that which makes the following detail, uncovered by Crikey‘s own David Hardaker, so remarkable.

In August this year, former Hillsong Pastor Joel A’Bell and his wife Julia recounted a 2006 breakfast with their friends and fellow churchgoers Scott and Jenny Morrison. According to A’Bell, Morrison told him “I really feel like this is what the Lord wants … He wants me to become prime minister”.

Think of the gaping chasm between that grandiose sense of divine interest in one’s career and what Scott Morrison has actually brought to the office. 2021’s Arsehat of the Year couldn’t have had a more worthy winner.