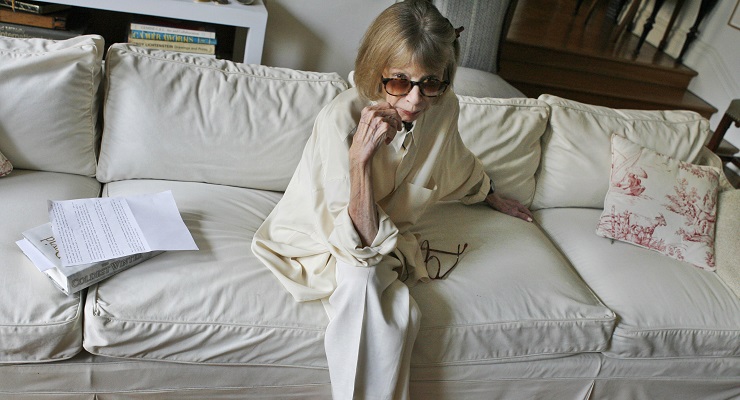 “We tell ourselves stories in order to live.”

“I found my mind turning increasingly to the end of promise, the dwindling of the days, the inevitability of the fading, the dying of the brightness.”

Joan Didion, who has died at the age of 87, wrote perfect sentences. Perfect constructions, delicate and spare, somehow both feather-light and landing on the page with a satisfying thump. But, as has been noted elsewhere, she was more than just a masterful stylist — behind that delicate cool, removed exterior, her work is teeming with life and feeling.

While she came to be thought of as a voice of the left, you suspect a streak of the conservatism she was raised with stuck with her her whole life, which is what made her such a wonderful chronicler of the disorder and fracturing in the US of the mid-to-late 1960s, and gave all her work that keen sense that “the world as I understood it no longer existed”. There is a reason her perhaps defining work, Slouching Towards Bethlehem, takes its title from W B Yeats’ great poem of apocalyptic disorder — in Didion’s work, things are always in the process of falling apart.

By the by, that conservatism is also why, I’d suggest, her work on, say, the “women’s movement” hasn’t aged all that well.

And, as is probably true of every great writer, there was occasionally something bracingly coldblooded about Didion. One of the most striking moments in Joan Didion: The Center Will Not Hold, the documentary about Didion made by her nephew Griffin Dunne, is when she asked about the conclusion of Slouching Towards Bethlehem. Having chronicled the world of Haight-Ashbury for weeks (“San Francisco was where the missing children were gathering and calling themselves ‘hippies’”), Didion is taken to a house where she meets a five-year-old girl who has been given LSD by her mother.

Dunne asks Didion what it was like. Didion begins “Well, it was …” and after a long pause, concludes “Let me tell you, it was gold. You live for moments like that, if you’re doing a piece. Good or bad.” As she wrote in the intro to the collection that takes its name from that piece, “the writer is always selling someone out”.

But it is to her writing specifically about politics, mostly for The New York Review of Books, that a publication like Crikey probably owes its greatest debt. The seminal piece “Insider Baseball” sketches “that handful of insiders who invent, year in and year out, the narrative of public life”.

The narrative, she goes on, “is made up of many understandings … to overlook the observable in the interests of obtaining a dramatic story line”.

They tend to prefer the theoretical to the observable, and to dismiss that which might be learned empirically as “anecdotal”. They tend to speak a language common in Washington but not specifically shared by the rest of us. They talk about “programs”, and “policy”, and how to “implement” them or it, about “trade-offs” and constituencies and positioning the candidate and distancing the candidate, about the “story”, and how it will “play”. They speak of a candidate’s performance, by which they usually mean his skill at circumventing questions, not as citizens but as professional insiders, attuned to signals pitched beyond the range of normal hearing

The desire to push back against that agreement, to write “the observable” back into the political narrative, is as good a summation of what political journalism ought to strive for as you could hope for, and animates the best work here and elsewhere.

But practically none of it ever approaches her ineffable style, those perfect sentences that, days or weeks or years later, return to the reader like music from another room.