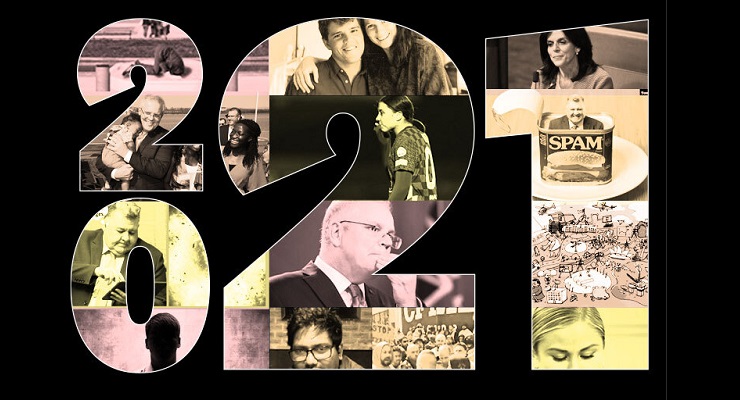 Well, that was a wild ride, a year plagued with scandals, rorts, a lying PM and a spammy MP — and Crikey captured it all. To “celebrate” the end of 2021, we’ve compiled all the stories that made Crikey readers tick (or scream and pull your hair out):

Just who is Scott Morrison?

This year investigations editor David Hardaker followed long and tangled pieces of string from Prime Minister Scott Morrison to many different parts of society: QAnon conspiracy figures; Hillsong Church’s Brian Houston; political hot-houses for Pentecostals. But what Crikey readers found most interesting was Morrison’s past — professional and personal — and the beliefs that make him the prime minister and “saviour” he is today.

Sexism in the House — and the women who pushed back

The toxic culture towards women in Parliament House and beyond came to the forefront this year thanks to the courageous women who told of their experiences. Crikey readers were here for it, championing the women who spoke out and those who literally knocked the patriarchy down in 2021.

The problem with progressives

Morrison had a shocker of a year by many people’s accounts, but Guy Rundle wasn’t about to let progressives claim victory. Rundle bookended 2021 with two very popular pieces which brought the Morrison naysayers back to earth. In the first, he argues that progressives are only hurting themselves by trying to mark Morrison as a “Trump-lite” (which, Rundle says, he ain’t), and in the second he urges those on the left to look to the region’s marginal seats before declaring an early election victory.

The allegations against then-AG Christian Porter

The historic rape allegation against a once-anonymous government minister was one of the most important stories of the year — and Crikey readers agreed.

As Amber Schultz put it at the time that this story was unfolding: “Rape, and especially historic rape, is not an easy issue to write on.” Add to this that the man accused, Christian Porter (who denies the allegation), turned out to be the highest law officer in the country and the alleged victim took her own life before the allegations became public and you had an incredibly complex and important story told excellently and sensitively by Schultz, Michael Bradley, Kishor Napier-Raman and Bernard Keane.

When Crikey came out in May and labelled the prime minister of Australia a liar, we were almost a lone voice in a sea of stenographers. But by November, Morrison’s penchant for a fib would be one of the stories of the year — and Crikey readers can officially say they started this trend by reading and sharing the PM’s lies and falsehoods long before it was cool.

ScoMo’s dossier was our most-read article of the year and the book that it went on to birth sold out of its first print run and swiftly found itself atop several best-reads lists by the end of the year.

The motivations of anti-vaxxers

“Vax” was Oxford English Dictionary’s word of 2021, and “anti-vax” was the word we wish we’d never heard this year. But hear it we did. When thousands began protesting in Melbourne and then around the country, ostensibly in opposition to vaccine mandates, it was the physical representation of the misinformation and frustration that people have been spreading and feeling since COVID-19 began.

Cam Wilson did an incredible job covering the movements and motivations of some of those at the heart of the anti-vax movement this year. Crikey readers must have agreed, because the following two articles were some of our most-read all year.

The one when we published Craig Kelly’s phone number

Sometimes journalism is about shining a light on what powerful figures do in the dark. Sometimes it’s about reminding the public that politicians are answerable to them, damn it, and answer they will. Such was the case when Craig Kelly sent out a huge volume of spam texts harassing people and Crikey responded in kind, publishing Kelly’s phone number and offering some useful ways that readers could (politely) let him know how they feel about his spam.

Some of you hated it, some of you loved it. A LOT of you read and — and shared it — making it our second most-read story of the year.

Who knows what 2022 will bring? We certainly don’t. But we know Crikey will be around to report on it — and we hope you’ll stick around too and find much more to love and loathe at Crikey.