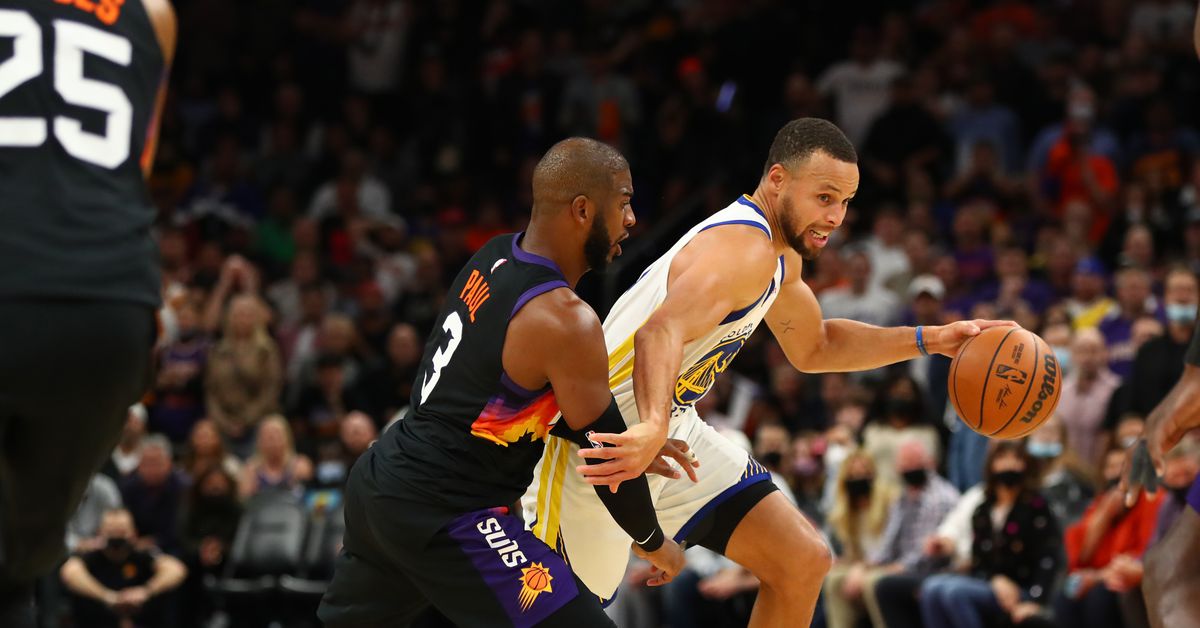 Christmas day is traditionally considered to be the first time casual sports fans start tuning into the NBA. Dec. 25 is the marquee day on the NBA’s regular season calendar, with great games stacked from the early afternoon through late at night. This season’s Christmas day schedule is as follows:

What should be a celebration of the NBA’s best teams and biggest stars has instead devolved into another sobering reminder of how bad the ongoing pandemic continues to be. Covid has torn through the league, but several top stars including Giannis Antetokounmpo, Kevin Durant, and James Harden are expected to be back in action on Christmas. The games will still go on, even when there are replacement players from the G League taking the court.

Covid is rampaging through almost every team

More than 100 players have tested positive for Covid in Dec. alone. The Chicago Bulls have already had three games postponed. The Hawks have nine players in protocol ahead of their Christmas matchup with the Knicks. Rosters are being compromised around the league, and the teams that are currently healthy have a massive advantage on their competition. Meanwhile, fans are still in arenas and the NBA doesn’t have any plans to take a break. The recent Covid outbreak is the biggest story in the league at the moment.

The NBA is calling up former players during the outbreak

As teams scramble to piece together enough healthy players to compete, several former players have been given another shot in the league.

Joe Johnson is back!

Free agent guard Joe Johnson is signing a 10-day deal with the Boston Celtics, sources tell ESPN. Johnson is returning to the franchise that drafted him 20 years ago and is expected to play tonight vs. Cleveland.

Brandon Knight is back!

The Dallas Mavericks are planning to sign free agent guard Brandon Knight on a 10-day hardship deal, source tells ESPN. Knight has been playing for Sioux Falls of the G-League, where he had 25 points on Tuesday night. Knight, 30, is a nine-year NBA veteran.

Lance Stephenson is back, too.

Lance Stephenson got the call. He’s joining the Hawks on a 10-day contract, source confirms. @TheSteinLine on it first.

It reunites Lance with coach Nate McMillan for a third time. As I often say, he’s misunderstood by those outside his team and appreciated by those on it.

And that’s just on teams playing on Christmas. DeMarcus Cousins is back, too, signing with the Bucks after an injury to starting center Brook Lopez.

We’re still waiting for Jamal Crawford to get the call, because buckets are forever.

The Lakers entered the season as the favorites in the Western Conference. After two months, LA is fighting just to stay out of the play-in tournament. LeBron James has already missed 10+ games due to injury, Anthony Davis will be sidelined for a month because of a knee sprain, and Russell Westbrook — the team’s big addition over the offseason — has been bringing his typical mixed bag of positives and negatives all season. The Lakers’ biggest issue is the rest of the lineup: LA just doesn’t have the ability to put enough good two-way players next to their three stars. The Lakers will probably make the playoffs, but this team just isn’t even close to good enough to win the title right now.

The Nets haven’t been the powerhouse we were expecting, either.

The Brooklyn Nets were the overwhelming favorites to win the championship going into the season. The Nets were so talented that they were still considered the favorites even after Kyrie Irving took himself out of action by refusing to get the Covid vaccine (New York has a law that requires players to be vaccinated to play). Irving still hasn’t played a game yet, but he’s reportedly ramping up to return for road games. Of course, he tested positive for Covid as soon as he came back to practice. Get your shots, people.

The Nets are still in first place in the conference thanks to the brilliance of Kevin Durant, but they really don’t look like a shoo-in to win or even reach the NBA Finals anymore. James Harden’s play has fallen off a bit as he recovers from a hamstring injury and adjusts to the league’s new foul drawing rules. Sharpshooter Joe Harris is out after having surgery on his ankle. Brooklyn’s defense has been surprisingly awesome — going from No. 23 last year to No. 5 this year — and it will be fascinating to see if that holds.

The Nets are definitely one of the league’s best teams. They just don’t seem like as much of a lock to win the championship this season as we thought.

The Warriors are incredible, and they’re getting Klay Thompson back shortly after Christmas.

The Warriors missed the playoffs last year despite Stephen Curry finishing top-three MVP voting and Draymond Green being named First-Team All-Defense. Golden State revamped its roster with veteran role players over the offseason, and suddenly they look like a juggernaut again. Golden State is top-five in both offensive and defensive efficiency at the moment. Curry is the front-runner for MVP. Veterans like Andre Iguodala (who returned to the team this summer), Otto Porter Jr., and Nemanja Bjelica have added stability to both ends of the floor. Young players like Jordan Poole and Gary Payton II have made a big impact, too.

The best news for the Warriors? Klay Thompson is coming back soon after missing the last two seasons with a torn ACL and torn achilles. While he won’t be in the lineup on Christmas like they hoped, he should be playing in January. A team that’s already arguably been the league’s best is about to get even better.

The Suns’ NBA Finals run last season was no fluke

The Suns went 10 consecutive seasons missing the playoffs before finally making the postseason last year. Once they got there, all they did was reach the NBA Finals, and come two wins short of a championship. If you thought the Suns got lucky last year, think again: this team is even better this season, and just might be the championship favorite right now.

The Suns are led by their awesome backcourt of 36-year-old Chris Paul and 25-year-old Devin Booker. Mikal Bridges and Deandre Ayton are also emerging into stars. Monty Williams remains one of the league’s best coaches, and he has an entire roster buying into his egalitarian schemes. The Suns have never won a championship in franchise history, but this could be the year.

Everyone is sleeping on the Bucks

The Bucks were down 0-2 to the Suns in the 2021 NBA Finals before running off four straight wins to capture the championship. All Giannis Antetokounmpo did was drop 50 points in Game 6 to clinch the title. Coming off the short offseason, Milwaukee had co-stars Khris Middleton and Jrue Holiday in and out of the lineup at the start of the year. Maybe that’s why it seems like everyone has forgotten about them.

The Bulls are back

The Bulls had the worst record in the NBA over the last four years entering this season. Chicago underwent a bold remodeling led by new front office tandem Arturas Karnisovas and Marc Eversley over the offseason, and the result has been a team near the top of the Eastern Conference standings all year. DeMar DeRozan is playing at an All-NBA level, Zach LaVine remains a three-level scoring dynamo, Lonzo Ball is offering elite defense and impressive shooting, and Alex Caruso is making the Lakers regret letting him go.

There’s only been one team in the league that’s a bigger surprise than Chicago.

The Cavaliers are shockingly good

The Cavs have been one of the worst teams in the NBA since LeBron James left for LA after the 2018 NBA Finals. The Cavs were expected to be outside the playoff picture again this season. Instead, Cleveland has been the league’s most pleasant surprise. Here’s how Cleveland has done it.

The Knicks have come back down to Earth

The Knicks were expected to be one of the league’s worst teams last season before enjoying a fantastic first year under head Tom Thibodeau that saw the team grab homecourt advantage in the East playoffs. Once they got there, the Hawks humbled New York in five games to eliminate them in the first round. If the Knicks were expected to build off last year’s success, it hasn’t happened: New York enters Christmas at 14-18 overall, and would miss the play-in tournament if it started today.

Julius Randle has taken a step back after his All-NBA season last year. New additions Kemba Walker and Evan Fournier have been torched when playing together. Derrick Rose was helping keep New York in games, but he just had ankle surgery. The only silver lining? After being pulled out of the rotation earlier this season, Walker returned to drop 44 points in the Knicks’ last game.

The Kings fired their coach and made their fans puke

Warning: this video is extremely gross. Just like the Kings for the past 15 years. At least Luke Walton doesn’t have to be around to see this.

Yes, Ben Simmons is still out for the Sixers

We have a full explainer on how the Philadelphia 76ers and Simmons got to this point here. Nothing has changed since the end of last season when Simmons famously struggled against the Atlanta Hawks in the playoffs.

5. Chris Paul: CP3 is averaging a career-low 14.3 points per game, but he’s also leading the league in assists at 10 dimes per night. More importantly, he’s the engine that makes everything go for the league-best Suns.

4. Kevin Durant: Durant is putting up nearly 30 points per game to lead the league in scoring. He’s also posting the highest assist rate of his career in Year 14.

3. Giannis Antetokounmpo: It feels like Giannis is the game’s most dominant defender. He’s also the most unstoppable scorer alive at the rim. It’s hard to doubt him after seeing the way he rose to the occasion in the NBA Finals last year.

2. Nikola Jokic: The Nuggets have fallen apart around him with significant injuries to Jamal Murray, Michael Porter Jr., and P.J. Dozier, but Jokic continues to be arguably the greatest player alive. After winning MVP last season, Jokic is putting up even better numbers this season. He’s unlikely to win because he’s team is too beat up to compete for the championship, but Jokic is basically unstoppable.

1. Stephen Curry: Curry turns 34 years old in March, but he’s still playing like he’s in his prime. He’s taking more three-pointers than ever (13.4 per game) while remaining a 40 percent shooter from deep. Given the Warriors’ gaudy record, Curry feels like the favorite right now to take home MVP honors for the third time in his historic career.

If you had to make an NBA Finals prediction right now ….

If you’re looking for a sleeper pick ….