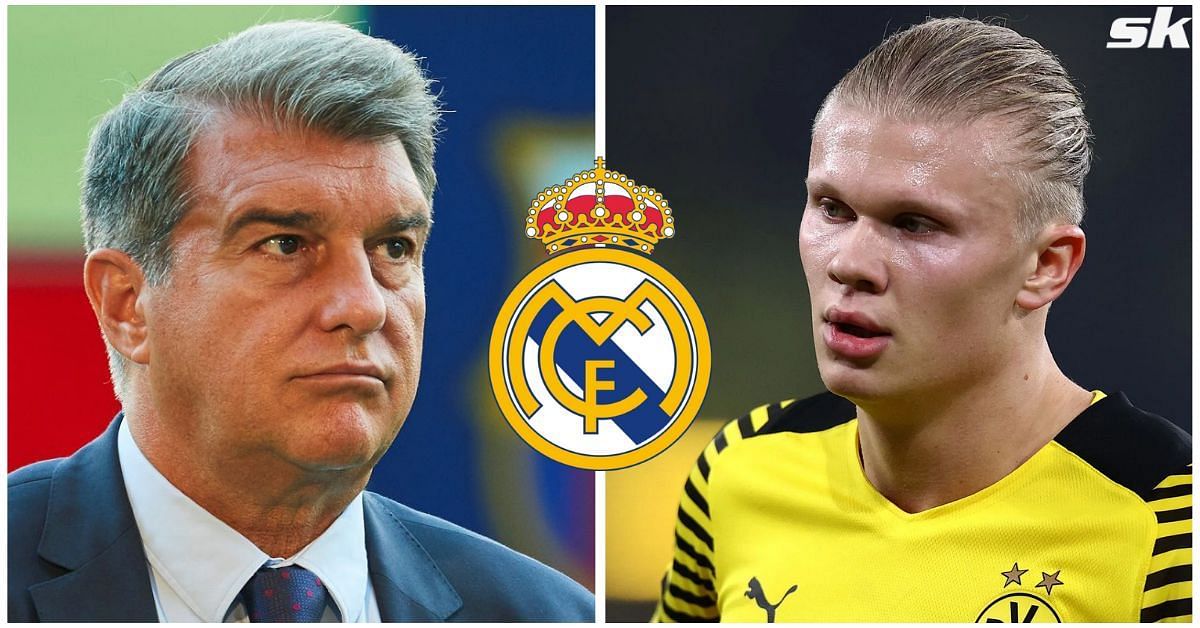 Barcelona president Joan Laporta is obsessed with making sure Erling Haaland does not join Real Madrid next year, according to Spanish newspaper Marca.

The 2022 summer transfer window is expected to determine the long-term futures of two of football’s best talents. Kylian Mbappe and Erling Haaland have been heavily linked with a move away from Paris Saint-Germain (PSG) and Borussia Dortmund, respectively.

Kylian Mbappe is in the final six months of his contract with PSG and is unlikely to extend his stay in France. The World Cup winner has been tipped to join Real Madrid when his deal with Mauricio Pochettino’s side comes to an end.

Erling Haaland, on the other hand, has a contract with Borussia Dortmund until the summer of 2024. However, the Norwegian is still expected to leave the German club, with a release clause of around €75m kicking in next year.

While Kylian Mbappe is expected to join Real Madrid, Los Blancos reportedly also want to acquire the services of Erling Haaland. Should Carlo Ancelotti’s side manage to pull that off, it will mean bad news for Barcelona.

According to reports, Barcelona president Joan Laporta is determined to ensure that Real Madrid does not land Erling Haaland. The Catalans appear to be wary of the threats that the Norwegian, Kylian Mbappe, Karim Benzema and Vinicius Jr. could cause.

🚨🌖| Barcelona president Joan Laporta is TERRIFIED at the idea of Kylian Mbappé and Erling Haaland teaming up at Real Madrid. He’s trying his best to prevent the Dortmund striker from joining Real Madrid. He is obsessed. @marca #rmalive

🚨🌖| Barcelona president Joan Laporta is TERRIFIED at the idea of Kylian Mbappé and Erling Haaland teaming up at Real Madrid. He’s trying his best to prevent the Dortmund striker from joining Real Madrid. He is obsessed. @marca #rmalive https://t.co/4SRqRC2iVX

Barcelona are among the clubs to have been credited with an interest in Erling Haaland. Joan Laporta even met with the striker’s agent Mino Raiola a few days ago.

However, Barcelona’s current financial situation could make Erling Haaland a difficult target to get. Joan Laporta, though, is keen to ensure Real Madrid do not get their hands on the 21-year-old and is ready go above and beyond to do that.

Barcelona and Real Madrid could face competition for Erling Haaland

Barcelona and Real Madrid do not seem to be the only clubs interested in signing Erling Haaland. The forward’s performances for Borussia Dortmund have seen him make his way onto the transfer wishlist of several teams.

Ralf Rangnick is reportedly keen to take Erling Haaland to Manchester United. The German tactician is said to have a good relationship with the Norwegian’s father, Alf-Inge Haaland.

Edinson Cavani and Cristiano Ronaldo are nearing the end of their careers. Hence, the Red Devils could look to sign a new striker soon and it is easy to understand why they have been linked with Erling Haaland.