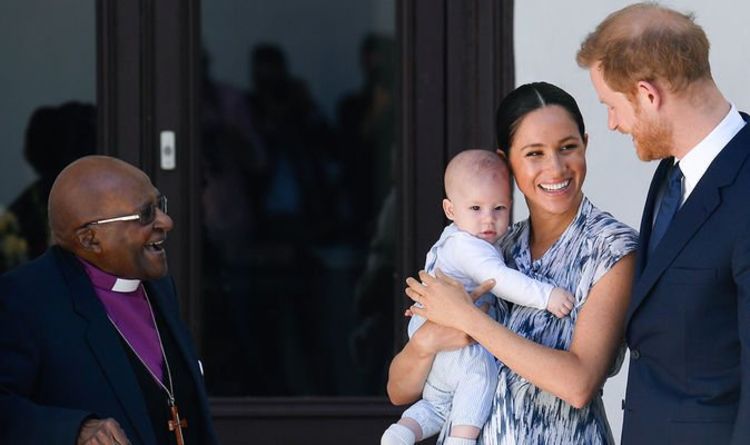 And the couple recalled their meeting with him during a trip to South Africa with then-baby son Archie in 2019, in what was to prove one of the world-famous clergyman’s final public engagements. In their statement, issued on Sunday, they said: “Archbishop Tutu will be remembered for his optimism, his moral clarity, and his joyful spirit.

“He was an icon for racial justice and beloved across the world.”

Referring to Tutu’s nickname, they added: “It was only two years ago that he held our son, Archie, while we were in South Africa – ‘Arch and The Arch’ he had joked, his infectious laughter ringing through the room, relaxing anyone in his presence.

“He remained a friend and will be sorely missed by all.”

Tutu, 90, a Nobel Peace Prize laureate, was instrumental in the dismantlement of Apartheid, and witnessed its end in 1994.

He also chaired a Truth and Reconciliation Commission, set up to unearth atrocities committed under it.

Although he retired from public life in 2010, he continued to do charity work through the Desmond and Leah Tutu Legacy Foundation and speak out on certain issues.

In 2008, he accused the West of complicity in Palestinian suffering by remaining silent.

In 2013, he declared his support for gay rights, saying he would never “worship a God who is homophobic”.

JUST IN: Not Covid, then? Remainers mocked as Brexit blamed AGAIN

The Queen earlier paid her own warm tribute, saying: “I am joined by the whole Royal Family in being deeply saddened by the news of the death of Archbishop Desmond Tutu, a man who tirelessly championed human rights in South Africa and across the world.

“I remember with fondness my meetings with him and his great warmth and humour.

“Archbishop Tutu’s loss will be felt by the people of South Africa, and by so many people in Great Britain, Northern Ireland and across the Commonwealth, where he was held in such high affection and esteem.”

He posted: “I am deeply saddened to hear of the death of Archbishop Desmond Tutu.

“He was a critical figure in the fight against apartheid and in the struggle to create a new South Africa – and will be remembered for his spiritual leadership and irrepressible good humour.”

South African president Cyril Ramaphosa said it was “another chapter of bereavement in our nation’s farewell to a generation of outstanding South Africans who have bequeathed us a liberated South Africa”.

The Nelson Mandela Foundation, which highlighted the friendship between former South African President Mandela and Tutu, said the loss of him was “immeasurable”.

US President Joe Biden and First Lady Jill Biden said they were “heartbroken” to discover Tutu had died.

In their statement they said: “We were blessed to spend time with him on several occasions over the past many years.”

According to the Desmond and Leah Tutu Legacy Foundation, Tutu died peacefully at the Oasis Frail Care Centre in Cape Town.

A cause of death has not yet been given.

He is survived by his wife Leah and their four children.