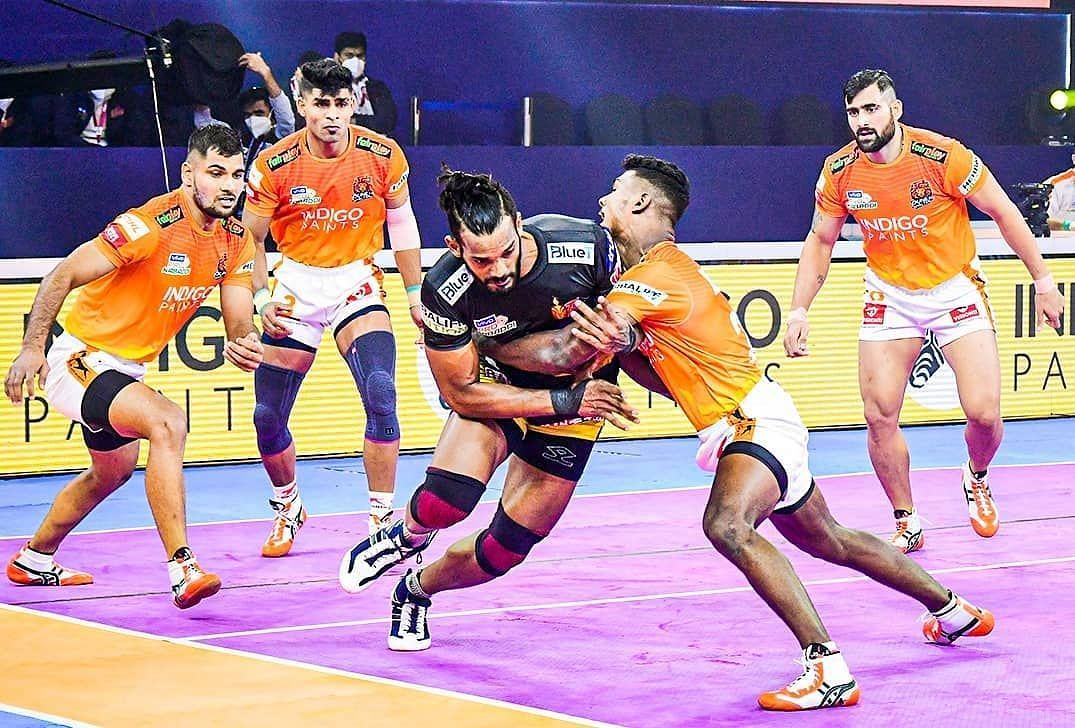 The fourth night of Pro Kabaddi 2021 featured three nail-biting encounters. UP Yoddha faced off against three-time winners Patna Pirates in the first match of the night. The Telugu Titans then locked horns with Puneri Paltan.

The night ended with a clash between inaugural champions Jaipur Pink Panthers and Vikash Khandola’s Haryana Steelers. All three games went down to the wire, and without further ado, let’s have a look at the results of the night.

Patna Pirates met Pardeep Narwal’s UP Yoddha in the opening encounter of the night. Pardeep’s team won the contest by 36-35. The match was decided in the buzzer raid, which was a do-or-die raid for the UP Yoddha.

UP Yoddha had a lead of one point, and Surender Gill smartly took the bonus before getting tackled. The Uttar Pradesh-based franchise eventually won by just one point. Pardeep scored a Super 10 for UP Yoddha, while captain Nitesh Kumar supported him with a High 5.

The second match of the night was also decided by the buzzer raid. Puneri Paltan led by 34-33 when substitute raider Rakesh Gowda came in to raid for the Telugu Titans. He attempted a bonus but the referees denied it and Pune won by a point.

Substitute raider Mohit Goyat was the star of Pune’s victory. He scored nine points for the team. Siddharth Desai’s Super 10 went in vain as the Telugu Titans lost by a close margin.

The night ended with another close encounter, where the Jaipur Pink Panthers defeated the Haryana Steelers 40-38. Arjun Deshwal and Deepak Hooda recorded a Super 10 each for the Pink Panthers, helping their team win their first game.

Pink’s Panthers defense did not perform up to the mark, but the team still managed to win. Vikash Khandola led his side from the front with a Super 10, and veteran defender Surender Nada backed him up well with four tackle points. Jaideep registered a High 5 in the Haryana Steelers defense. However, their efforts ended in a losing cause.