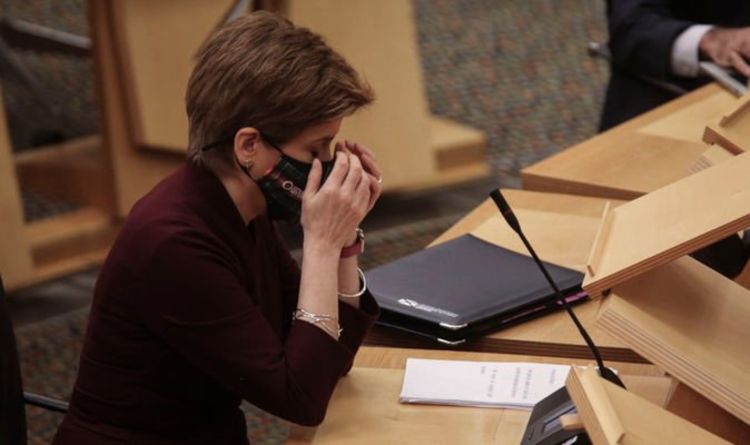 In total, 11,030 cases were reported on Boxing Day – the highest number since the beginning of the pandemic. Christmas Day saw the reporting of 8,252 cases, while a further 10,562 were reported today, on Monday.

Scottish First Minister Nicola Sturgeon said the worst is yet to come.

Responding to the figures, she said: “While these figures are provisional, the steep increase in cases we have been expecting is now materialising, and this reflects the significantly increased transmissibility of Omicron.

“We would expect to see case numbers rise further in the days ahead – though it is worth bearing in mind that they are likely to have been even higher but for the compliance of the public with the guidance issued in the run up to Christmas.”

Scientists continue to work on discovering the characteristics of the Omicron Covid variant.

It is believed to spread more quickly but is less severe than previous strains.

This is reflected by Government figures, which show both hospitalisation and death figures in Scotland falling during the emergence of the variant.

Ms Sturgeon highlighted this trend in a statement, noting “the rate of hospitalisation associated with it is much lower than past strains of the virus”.

Given the reduced severity of the variant, the SNP Government has received backlash for deciding to go ahead with imposing new restrictions over the New Year period.

It added: “Open your homes for COP26 but closed doors for fans.”

This referred to the welcoming of thousands of climate delegates during COP26 – contrasting with the limiting of social interaction after Christmas.

Ms Sturgeon accepted in a statement that “sticking to all of these measures is really hard – especially at this time of year”.

But she added: “There’s no doubt whatsoever it will help keep us safer.”

A record number of cases were also recorded in England on Christmas Day.

But the English Government has decided – likely upon receiving evidence on the nature of the Omicron variant – not to introduce new measures over the New Year’s period.

Daily Sceptic Editor Toby Young said this equated to a win for sceptics of lockdown as a pandemic response.

He told Express.co.uk: “The lockdown sceptics are winning the argument.

“The longer Boris Johnson delays making a decision, the harder it will be to recall Parliament before the year ends and the less likely it is that any additional restrictions will be imposed.”