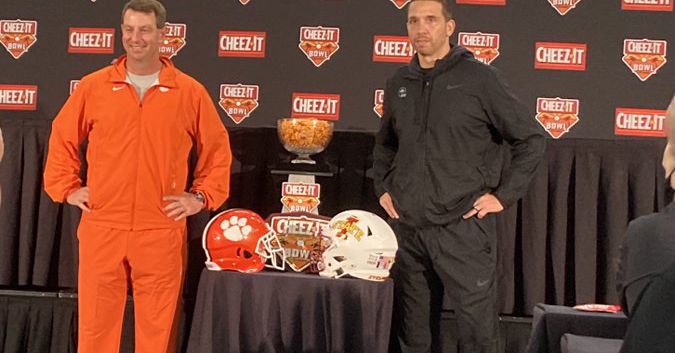 Clemson head coach Dabo Swinney wasn’t going to let 2021 escape him without one final, great meme. With 2022 around the corner, Swinney turned up to his Cheez-It Bowl press conference looking like this.

In isolation this really isn’t that weird. I mean, Iowa State head coach Matt Campbell is standing right there in a black jumpsuit for his school, so they’re basically wearing the same thing. It’s more that orange is one hell of a fashion choice compared to black, and golly did it evoke a lot of feeling.

There is absolutely no denying that most of the time we see someone wearing an orange jumpsuit they’re on work release, picking up trash on the side of the highway. So naturally this was the go-to, including from yours truly.

But goodness, was there a lot more genius than just comparing Dabo to an inmate.

The thing about the orange jumpsuit look is that you have to be monumentally, impossibly cool to pull it off. There’s a certain amount of self confidence required that Swinney could never, ever pull off — and that’s why it was all so hilarious.

Hell, maybe we’re being too unfair and Dabo is about to save us all from annihilation.

What if we’ve got this all wrong, and Swinney is a critical part of the rebellion?

It’s not just the orange, it’s the hands on his hips, the dumb smile on his face — the entire aura that Dabo is throwing out here that makes it amazing. It’s like the extended cast of The Sopranos all moved to South Carolina for tax purposes and became Clemson boosters.

It might have been a disastrous year for the 9-3 Tigers by their lofty, National Championship standards, but they’ll always have a coach willing to put himself out there for the school. Best of luck on the chain gang, Dabo.