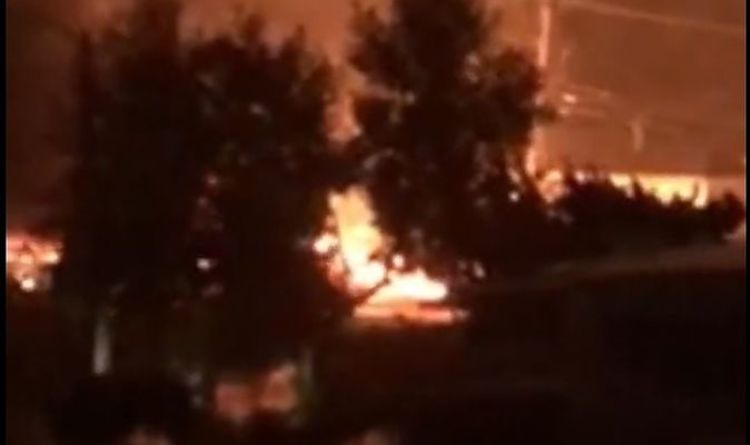 The source of the crash is still being investigated, but early reports suggest the Learjet 35 aircraft clipped power lines on its descent.

A local news outlet CBS News 8 reported that more than 2,500 customers were without power following the crash in the area.

Early reports suggested the plane struck at least one home, but California Highway Patrol have now confirmed the Learjet 35 aircraft crashed on the road.

According to local sources, the fire has been contained.

A hazmat team has quickly responded to the accident area.

In a tweet, the San Diego Watch Commander said: “If you live in the area of @CityofElCajon @CityofLakeside @CityofSantee, please avoid the area near Pepper Dr. from Mollison Ave east to Pepper Hill Drive.

“This is a developing situation. We appreciate your patience and cooperation.”

A video shared by a local shows pieces of plane scattered across the road on Pepper Drive in the Lakeside area after the incident.

People close to the situation say the plane that crashed was a medical transport Learjet, however, the authorities are yet to confirm this.

The Sheriff’s department has now declared that the fire has been taken care of, however, it will take some more time to clear the area.

It tweeted: “At this time, the fire is out.

“It will take time to process the scene, but @FAANews & @NTSB have been notified & will handle the investigation of a plane crash in @CityofElCajon.”