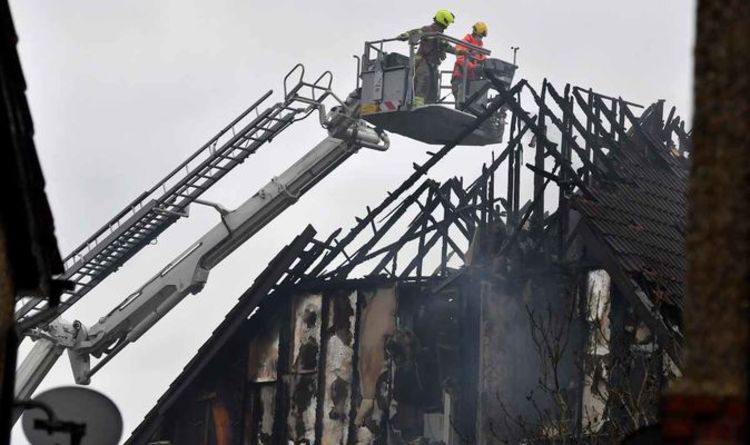 The block of flights was gutted by an inferno two weeks ago. The blaze is understood to have started inside the building and is being treated by authorities as arson. On Thursday, the remains of a second body were found by Thames Valley Police inside Rowe Court, Reading.

Emergency workers have been unable to recover or identify the body amid concerns that the block of flats might collapse.

There have now been two confirmed casualties from the fire that started inside the building on December 15.

A police spokesman said: “Due to the structural instability of the building, it currently remains impossible to recover those who are inside.

“In the weeks since the fire, scaffolding has been put in place around the site.

“While it is impossible to predict when or if this will happen, the emergency services continue to monitor the site closely.

“Also, weather conditions which could affect the situation.

“If the collapse does occur, it is expected that this could be loud as well as visible to those living nearby.

“In the event of a collapse, people are advised that they should keep windows and doors closed to prevent dust from entering their homes.”

A man has appeared in court charged with murder and arson in connection with the fire which engulfed the block of flats and killed two people.

Hakeem Kigundu, 31, has been charged with murder and arson with intent to endanger life.

He is due before Reading Crown Court in February.